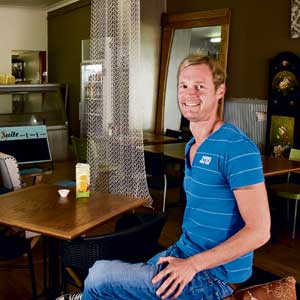 Brendon Aitken\'s cafe, The Suite will reopen as a wine bar in March 2009, similar to the image top

Attracted by potential offered by the small bar licence system introduced about 18 months ago, Mr Aitken was ready to get started with a wine bar-cum-bistro in the Shenton Park cafe he currently owns, The Suite.

"We bought it two years ago with the view to...turn it into a small bar," Mr Aitken told Gusto.

But when a unique site came up for rent in Mount Hawthorn on the first floor of a gift store, Mr Aitken says he couldn't turn the opportunity down and took on that project as well.

"It's an incredible location on the corner of Scarborough Beach Road and Coogee Street. There is no street frontage, which is great because we wanted to have that exclusivity," Mr Aitken says.

But he says that, if he had his time again, he might have focused on the one venue, just to start with.

Getting a small bar accepted by locals in a residential suburb, implementing a sustainable design and doing everything from scratch, twice, was a lot to take on.

"This has been a passion of mine for a long time. I lived in London for 10 years and the way they do it there...you have bars with houses on top of it," Mr Aitken says.

"In Perth, people are scared of licensed venues. I wanted to create a model where we can blend in the amenities rather than putting a footprint on it.

"We want to make local venues for local people."

Part of that process involved getting feedback on the idea from local residents.

"We didn't get a single objection for the Mount Hawthorn venue, and Shenton Park received three," Mr Aitken says.

"We can't guarantee that people won't close their car door loudly or that they will talk quietly when leaving our premises, but we are doing our best to reduce antisocial behaviour by not serving draught beer and having the over-25 years policy."

The recently opened Devilles Pad in East Perth and Double Lucky in Leederville both implemented the 25-years-and-over policy, which according to Mr Aitken is more part of the concept of the venue than a strict rule.

Mr Aitken is currently refurbishing the Mt Hawthorn venue and is hoping to trade under the name The Cabin by January 2009.

He says The Suite at Shenton Park will keep its current name and will open in March 2009.

Mr Aitken hired Evoke Design Group for the refurbishment because of its sustainable focus, innovative set up and use of recycled materials.

The total investment to get the bars up and running was more than $1 million, which Mr Aitken managed to finance in partnership with his parents.

He recently appointed Shannon Whitmore executive chef for the two venues, while Adam Wells, who currently runs The Suite cafe, will be the operations manager.

He's already started designing the menu for the venues, which will have dishes such as a Carpaccio of Black Angus beef, red onion and blue cheese petit salad, and house-made local prawn and scallop ravioli with vanilla cream bisque.

The Suite will have a long bar area at the front and an extension at the back of the building will have a dining room and sit 80 people.

The Cabin is intended to have a private dining room feel and will sit 120 people.

Mr Aitken says he is already thinking about replicating a similar concept in Scarborough, Maylands and the western suburbs.

He is also considering putting a submission to Brookfield Multiplex to build a tavern at the Vale development in the Swan Valley.