Bellevue Gold has discovered high-grade gold mineralisation below the historical Bellevue underground mine workings near Leinster, WA, with a peak result of 2.2m @ 27.8g/t gold from 656m down-hole. The new Deacon lode is located between 500m and 750m from the surface, over about 1km of strike, with mineralisation hosted in the same altered rocks as the mine and gold associated with sulphide minerals. 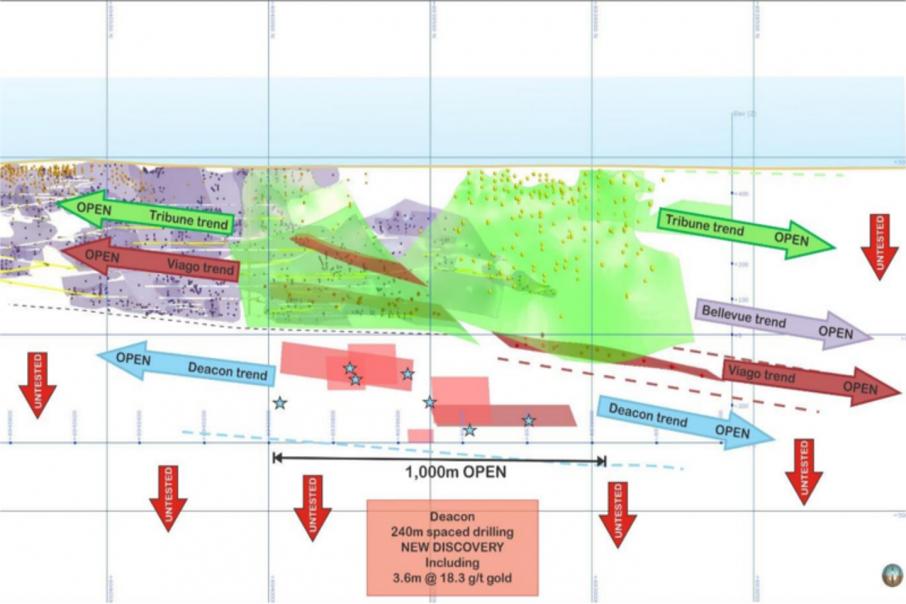 Bellevue Gold has discovered high-grade mineralisation beneath its historical namesake mine near Leinster, WA, nailing multiple holes with visible gold, with grades up to 27.8 grams per tonne gold over 2.2 metres from 656m down-hole.

The new drilling has defined the so-called Deacon lode, which is located between 500m and 750m from the natural surface and located over a strike length of about 1km.

At present, mineralisation from Deacon is open in all directions and down-hole electromagnetic geophysical surveys indicate that there are further off-hole conductors for follow-up drill targeting.

Importantly, Deacon is interpreted to be a potential continuation of the Bellevue mine’s footwall gold mineralisation, located about 400m west of the new lode, which is thought to be offset by a fault system.

According to Bellevue management, the gold mineralisation appears to be sited in the same geological rock sequences as the mine and is associated with sulphides and a similar alteration style to that observed within the underground workings.

The widths and grades of the newly delineated ore system have a similar tenor to the nearby Viago lode, located by Bellevue in July 2018.

Last month, the company revealed that it had expanded the inferred mineral resources at Bellevue to 5 million tonnes grading 11.1g/t gold for 1.8 million ounces.

Additional drilling is also underway with three rigs testing the Tribune, Bellevue and Viago lodes and another rig targeting exploratory positions and other geophysical anomalies across the project.

A cashed-up Bellevue has about $35m at its disposal to continue its ongoing drilling programs and related site activities throughout the remainder of 2019.

“The exploration team believes the recent drilling reflects the likely continuation of the Bellevue shear lode system beneath the old mine. Following the recent capital raising the company is fully funded to continue with our strategy to continue to expand the extents of the mineralised system in combination with starting to increase confidence in the current 1.8 million ounce inferred resource estimate.”

“With six diamond core drill rigs operating at the project, the company anticipates significant news flow over the next 6 – 12 months.”