Believe you can achieve what you think

Classic writers offer timeless and peerless advice we should all heed to be successful. 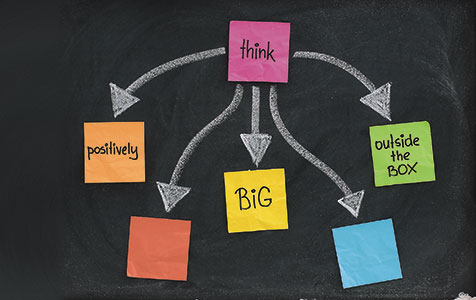 The harder pathway to success is to believe you can do it, the hardest part is that you have to be willing to take action.

Napoleon Hill’s book Think and Grow Rich is full of timeless lessons. “Thoughts are things” is the title and the first words of the first chapter of the book.

When I first read those words, I did not really understand what they meant – even when I read the first chapter and the examples offered in Hill’s classic.

It did not resonate until I got to the end of the chapter and read: “Whatever the mind of man can conceive, and believe, it can achieve.” Then I started to get it. That was 1972.

By coincidence, it was only a few days later that I heard the late, great Earl Nightingale say: “You become what you think about.” At that moment, I got it. It clicked. And it has clicked ever since then.

More reading and studying about thinking and the thought process revealed that neither Hill nor Nightingale had the original thought.

From Socrates to Samuel Smiles, to Orison Swett Marden, to Elbert Hubbard and to Dale Carnegie – they all had their own way of saying the same thing.

Your thinking becomes your actions. And it’s those dedicated, well-planned and directed actions that lead to your outcomes. Your reality. Better stated, your success.

All of these legendary scholars can’t be wrong.

All of them told me in their writings – the same way I’m telling you – that positive thought leads to positive actions and positive results, if the aim and the purpose are passionately believed.

Orison Swett Marden’s book, He Who Thinks He Can, written in 1908, says it in the title. It’s plain as day right on the cover of his book. It was Marden, by the way, that founded Success Magazine in 1888.

Hill’s title Think and Grow Rich tells you first you have to think. Your thinking will affect your belief, your belief will help you create your major purpose, your major purpose will clarify your directed actions and your actions, combined with your desire, your dedication and your determination will determine your wealth.

Getting it, that’s the easy part. First you get it, you understand it then you agree with it.

The rest of Think and Grow Rich contains the ideas, the definitions and the clarifications that provide the answers.

Hill describes it as the roadmap to riches. I’m telling you, it’s the most important success thinking you will ever be exposed to – as long as you repeat it until it becomes your reality.

But I have to stop here and clarify the book. Think and Grow Rich, and Hill’s writing, is not written in today’s language. There are no references to computers, email, the web, Facebook, social media, credit cards, or even television.

Because none of those things existed when Hill penned this classic self-help book. Yet somehow the book has managed to sell more than 100 million copies over the past seven decades.

To receive all the wealth in the book, you have to get over the fact Think and Grow Rich was written 70 years ago. At that time, Hill – and his colleague Dale Carnegie – were screaming: “Make friends, be positive, believe in yourself, be influential, develop a goal and a plan, articulate yourself clearly, dedicate yourself to excellence, take directed action and encourage others to do the same.”

These books are not 70 years old, rather they were 70 years ahead of their time. Maybe that’s why Hill’s Think and Grow Rich and Carnegie’s How to Win Friends and Influence People have been on bestseller lists for 70 years.

The first chapter ends the same way it began. With one sentence of immortal wisdom: “Whatever the mind of man can conceive, and believe, it can achieve.”

I’m sharing this information today in the hopes you will read or re-read this classic. Re-dedicate yourself to your best thinking (first), so you can do your best for others (second).

That’s the secret. Please tell everyone.

Jeffrey Gitomer is an American author, professional speaker and business trainer, who writes and lectures internationally on sales, customer loyalty and personal development.
© 2014 All rights reserved. Don’t reproduce this document without written permission from Jeffrey H. Gitomer and Buy Gitomer.