The results of unlisted Barton Gold’s latest geophysical survey nearby its soon to be restarted Tarcoola gold project in South Australia are pulse-quickening. The company says it has identified a 3.5km-long trend or geological “channel” that may be harbouring look-alike gold deposits to the existing Perseverance open pit at the rapidly developing Tarcoola gold project. 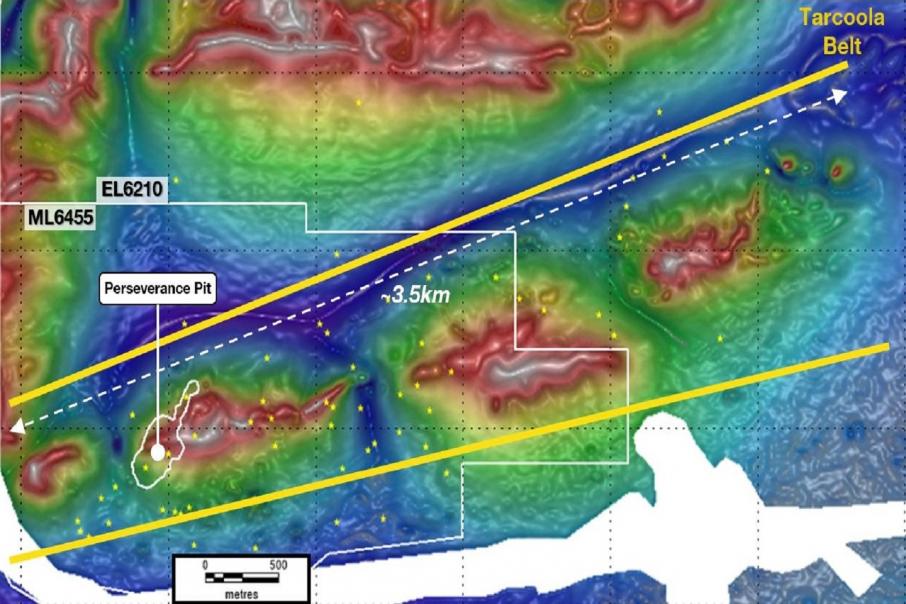 The results of unlisted Barton Gold’s latest geophysical survey nearby its soon to be restarted Tarcoola gold project in South Australia are pulse-quickening. The company says it has identified a 3.5km-long trend or geological “channel” that may be harbouring look-alike gold deposits to the existing Perseverance open pit at the rapidly developing Tarcoola gold project.

Barton is currently ploughing more than 10,000 metres of drilling into a range of near mine targets at Tarcoola, with the aim of proving up the additional resource ounces needed to underwrite the restart of its mothballed Challenger mill, just 120km up the road. However, the ongoing regional exploration program looks to have hit paydirt, identifying a series of priority targets immediately to the east of the Perseverance mine.

The company has recently completed an ultra-high definition geophysical survey over the company’s Tarcoola leases, covering an area of over 140 square kilometres. The survey takes in much of the Tarcoola Ranges which the company claims to be ‘one of the most historically gold-abundant domains in South Australia and the site of more than 600 historical workings’ which are spread across the broader regional goldfield.

Barton's geophysical survey has identified multiple shallow, near-mine exploration targets along a 3.5km long trend the company dubs the ‘Tarcoola Belt, target channel’. The recently discovered channel appears to be up to a kilometre wide and hosts the high-grade Perseverance open pit. However, Barton has now identified three high priority drill targets within the channel  that strongly correlate with a series of ultra-high-grade “ounce-to-the-tonne” historical mines that could potentially present as Perseverance look-a-likes.

Barton’s analysis shows the three targets have a similar geophysical footprint to the existing mine. Perseverance punched out ore at more than 4 g/t gold when it was operating in 2018 and the ongoing drilling campaign is focused on the near mine extensions to this mineralisation.

According to the privately held Australian gold developer, the Perseverance pit sits above a magnetic decline underlying the Tarcoola Ranges and contains three key mineralised structures hosting gold mineralisation in a series of shear zones and faults.

Barton’s 3D modelling of the magnetic data has now zeroed in on a series of magnetic lows which are coincident with a grab bag of coincident features including significant structural deformation, gravity features, calcrete sampling anomalies, shallow high-grade drilling results and historical ultra-high-grade mining – all of which make for compelling targets for future drill testing.

The ultra-high-grade historical workings at Tarcoola date back to the 1900’s and lie around 1km east of the Perseverance pit. The grade of these historical mines is impressive . The old workings include the ‘Tarcoola Blocks’ where 57,228 ounces were produced at an average grade of 43 g/t gold, ‘Warrigal South’ that averaged 33 g/t and ‘Day Dawn’ that produced at an impressive 46.88 g/t gold.

“The existing Perseverance Pit represents only a scratch in the surface of this historically significant gold camp, and we believe that additional ongoing work including seismic re-processing will further identify its significant potential.”

With the drill rods continuing to spin at Tarcoola, three potential repetitions of the Perseverance deposit in its sights, a mothballed processing plant up the road ready for recommissioning and South Australia’s largest undeveloped gold-only resource down the road at Tunkilla, Barton is a real; chance to get into production in South Australia without too much fuss.

In the coming weeks, the company can look forward to its first drill results from Tarcoola and a confirmation of what it already suspects – that there’s plenty of gold left at Tarcoola.