Colin Barnett’s premiership will be judged on the capacity to pay down the debt accumulated on his watch. 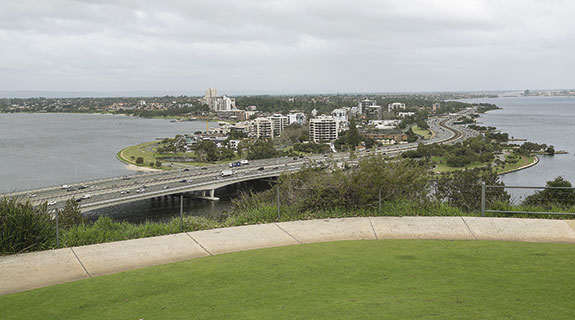 CASH DOWN: Opened in its original form in 1959, the Narrows Bridge was funded by money the government had in the bank.

Colin Barnett’s premiership will be judged on the capacity to pay down the debt accumulated on his watch.

The Barnett government’s mounting debt, which is climbing towards $28 billion, is in part the result of the premier’s desire to secure his legacy via a vast infrastructure and public works program.

Sir John’s legacy includes the go-ahead for the Mundaring-Kalgoorlie pipeline (1894-1903), which boosted the critically important gold mining sector, and the development of Fremantle’s inner harbour.

Several suburbs, including one in Canberra, carry his name in recognition of his decade-long premiership and subsequent federal ministerial years.

Sir Charles’s legacy includes ensuring the emergence of the export-oriented Pilbara iron ore province, after which he repeated this with development of the North-West Shelf that’s now Australia’s premier oil and gas producing region.

This groundbreaking northern developmental focus underpinned the unbroken prosperity Western Australians have enjoyed since the mid-1960s.

Although his Pilbara mining efforts came during the premiership of Sir David Brand (1959 to 1971), Sir Charles stood out as the driving ministerial force behind them, followed, as premier from 1974 to 1982, with his North-West Shelf involvement.

The Forrest and Court legacies are indisputably pivotal in shaping the state’s largely export-oriented economy.

Without their roles, WA would have remained an economic backwater.

But none has matched them.

That’s not to scoff at some of their successors’ notable achievements, however.

During his time as premier, Brian Burke oversaw the electrification of Perth’s rail network and what was the pioneering move to market Western Australia’s education services, now Australia’s fifth largest export sector.

Wikipedia describes the origin of this elegant structure as follows: “The state started saving for the new bridge in September 1954, and the construction of the bridge was approved by the Hawke state Labor government in November 1954.”

So instead of financing this vital link between Perth’s northern and southern suburbs by acquiring debt, the Hawke government set money aside to pay for this legacy project.

And there’s also Geoff Gallop’s legacy – the go-ahead for the Perth-to-Mandurah railroad service, directly between Perth’s CBD and Mandurah.

When Dr Gallop won the 2001 election, journeys from Mandurah to Perth were to have been undertaken via out-of-the-way Kelmscott, not directly by travelling down Kwinana Freeway.

Among all WA’s premiers, however, it is Mr Barnett who appears to be actively seeking a notable legacy.

In his case, it’s difficult not to believe that he sees his ongoing additions to state debt – from $3.6 billion when becoming premier in 2008 to $23.4 billion now, and rising towards $28 billion – are in part to give his legacy aspiration an upward nudge.

Here’s his responses during a fiery November 2010 parliamentary exchange with one-time Labor treasurer (and in 2010 opposition leader) Eric Ripper, who’d left treasury with an easily managed $3.6 billion owing at the end of the Gallop/Alan Carpenter years of 2001-08.

Barnett: “I have stated that the objective of this government is to contain debt to below $20 billion.”

Ripper: “If it goes to $20 billion, it would have gone up five times since you came in.”

Barnett: “The leader of the opposition failed in his role.”

Ripper: “It has gone up five times and you think you’re a success.”

Barnett: “The leader of the opposition, when treasurer, had an enormous surge in commodity prices, he had a huge flow of property income, and what legacy did he leave? Nothing. He left no legacy. He squandered a commodity price boom.”

Clearly to Mr Barnett’s mind, not over-borrowing, like he’s done, during a “commodity price boom” is squandering.

Mr Ripper, of course, belongs to the prudent Hawke tradition where living within, rather than beyond, one’s means trumps sinking into debt.

So what of the Barnett legacy?

We’re told his pet project at Elizabeth Quay, which has meant the closure of Riverside Drive and will remain a construction site for years to come, plus the $1.1 billion Burswood Stadium are the jewels in his hoped-for legacy crown.

But what of the other proposed projects – Geraldton’s Oakajee port, the Kimberley’s James Price Point gas hub, and Fremantle’s outer-harbour and access?

All three remain out of sight.

Such important economic, as opposed to recreational, projects have gone by the board.

In the fullness of time, Mr Barnett’s legacy might include the medical/health precincts at Murdoch, Midland and Nedlands.

But a negative legacy will forever be the burgeoning debt accumulated under his government as mining royalties shrink.