Food or cocktails, and a friendly face,It’s all there at Bar 399.Adam Orlando reports. 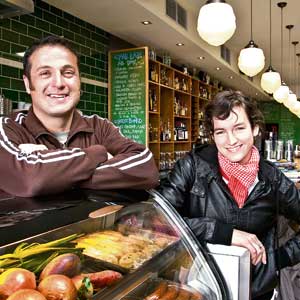 "At the end of the day I can make cocktails or I can make food. What's the difference?" Mr Beadle asked rhetorically.

"Our guys are not bartenders now, they're hospitality people.

Admittedly not a fan of the Small Bar Association established by Lavan Legal partner Dan Mossenson, the entrepreneur believes more should be done to change the city's nightlife and binge drinking culture.

Mr Beadle believes the association should have been formed and operated by hotel owners with experience running hospitality venues.

Like many before him, Mr Beadle wants to re-create Northbridge as the entertainment hub of the city, and he is starting with 399.

"I like being in an urban area where there are different demographics, and William Street is one of the very few streets in Perth I would say really has that urban feel," he says.

"I grew up working in bars where you could have a high court judge standing next to a rigger, so to me that's true urban diversity.

"And that's what we were looking for. I guess the premise is that everyone is welcomed all the time.

"We're not looking to be fashionable; we're the opposite of what fashionable is.

"Everybody likes to see a nice smiling face when they walk in the door and they want good service, so we do that.

"To succeed in this town, you have to do that. No-one walks through the front door of 399 without being greeted.

"This is as much of a lifestyle for us as it is a job. I mean, I've been in hospitality for 25 years, I'm not doing hospitality because of the money.

"[Bar manager] Natalie [Davis] has been in hospitality for near on 10 years so it's in our blood, it's what we live and breathe."

Ms Davis, who has worked with Mr Beadle for the past eight years, says building up a regular customer base is a key strategy.

"Every single customer is a friend or a potential friend; you can sit down and chat to everybody, there's a real ambience to our room, I think, with the openness of it," she says.

"And people get eye contact from staff like the second they walk in the door, and it's lively and comfortable, they feel they can have a family-like chat or a friend-like chat with you.

"We haven't built up so many regulars in one bar like this before."

Mr Beadle says few Northbridge bars cater for generations of people "ranging from eight months to 80 years old" as 399 did.

"Rather than coming in as a bar owner then advertising, trying to be fashionable ... and being in the type of business where you have to chase the dollar and the customer for their dollars, we said we want to build a steady crowd and do real fun stuff here," he says.

"People use the venue as a meeting hub of their day and for my money, that's the whole point of doing smaller personal bars, you are just the way people dreamt."