Wild Bakery isn’t the kind of place you might stumble upon in the lunchtime scramble for a sausage roll and sweet pastry. 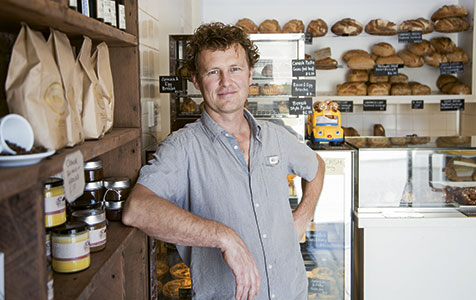 Wild Bakery isn’t the kind of place you might stumble upon in the lunchtime scramble for a sausage roll and sweet pastry.

Tucked around the corner from South Terrace in Fremantle, the small retail outlet relies on repeat business from Freo locals and the word-of-mouth trade they bring.

Building the business has been a slow process for owner Daragh Grier, who started selling his speciality loaves of bread at local farmers markets.

“It’s a very unusual location; a side street with very bad signage, but within weeks of opening (the retail store) we were busy,” Mr Grier told Business News.

“The marketing is in the markets, it has done a lot of that focus group stuff and product development for us.”

Mr Grier began selling his loaves of bread at the Subiaco Farmers Market in 2010 when it was suggested he extend his line of sweet foods to include ‘artisan’ bread.

The specialty bread is suitable for people with gluten-sensitivity; instead of being made in 45 minutes like mass-produced bread, the ingredients for Mr Grier’s bread are fermented over 24 hours before being baked.

He said that made the final product much easier for people to digest.

For two years Mr Grier sold his bread in both the Subiaco and Beaconsfield-based Growers Green farmers markets before seriously contemplating a retail store in March last year.

The bakery is located just a kilometre from the Beaconsfield markets, where the Wild Bakery stall would regularly sell out of bread.

“The farmers market became a great test case for whether a retail outlet would work in the area,” Mr Grier said.

“It was going well as a one-person operation, but we decided to grow it.”

That led to the purchase of the existing commercial kitchen in South Fremantle and opening of the retail store.

Mr Grier said trade hadn’t been affected despite the two sales ‘outlets’ being so close together – market sales now account for about 15 per cent of Wild Bakery’s revenue – with the business having grown to eight full-time staff.

Mr Grier said maintaining a presence in the markets remained an important part of the bakery’s business.

“The farmers market is a great way to be in touch with customers and to really understand at a grassroots level what makes them tick and what it is that they want – it’s like a perpetual survey,” he said.

“And having them all around the city gives you a sense of what’s common across all suburbs.”

Meanwhile artisan cheese maker Over the Moon can be found at the Subiaco, Mt Claremont and Manning farmers markets as well as in around 50 retail outlets in Western Australia.

Long-time market manager Bev McGhie said it was the face-to-face customer contact that encouraged producers to stay loyal to farmers markets, which were undergoing a renaissance amid increasing desire for local produce.

“People are starting to buy-in to farmers markets and they’re wanting to buy local – they want to know where it’s come from,” she said.

Ms McGhie started the Poynter farmers market in 2009 followed by the Kyilla market in 2012.

This year she has embarked on bringing farmers into the city for the Central Park farmers market on alternate Wednesdays and the Victoria Park market, which launched on March 9.