Saran Bajaj is combining his love of arcade games with staple bar offerings of cocktails and pizza at his new venue, Palace Arcade. 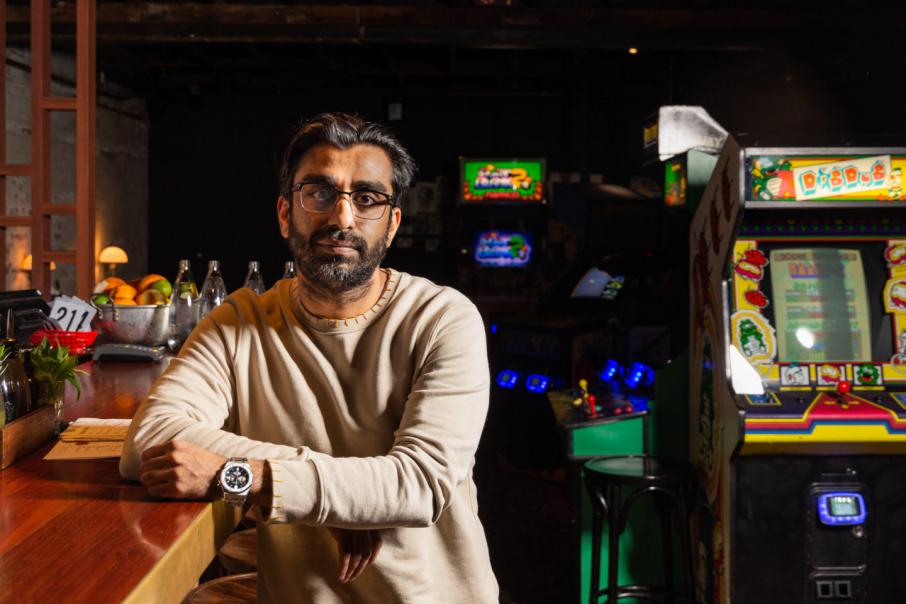 Saran Bajaj says he opened the Palace as a way to contribute something fresh to Perth’s nightlife. Photo: Gabriel Oliveira

Anybody who grew up playing classic arcade games such as Time Crisis, Pacman and Q*bert might feel the urge to revisit their youth with a trip to the Palace Arcade bar on Beaufort Street, which opened in late August.

Palace is majority owned by Origin NYE festival founder Saran Bajaj, and will be home to about 50 of his collection of 150 arcade games, on a rotational basis.

Mr Bajaj told Business News he opened the Palace as a way to contribute something fresh to Perth’s nightlife.

“The thing was, for me, I’m 33, (my friends and I) ended up in one of my warehouses most weekends playing arcade games, drinking beers and things like that.

“There’s really not much to do (in Perth), the hospitality spending is focused on trying to get your food and beverage dollar, but no-one’s really invested in giving you something to do.

“I felt there was a good gap there to create content for people that is literally just something for them to do other than eat and drink.”

In order to fill that gap, Mr Bajaj bought the Dominion League bar from Hamish Fleming and Siobhan Blumann in July.

While the price was undisclosed, Mr Bajaj said it had been a very reasonable outcome.

It isn’t the first bar he has owned, having opened Shape nightclub, which was located on Hay Street, more than a decade ago.

Palace Arcade will include two further investors, Mr Bajaj’s brother, with 30 per cent, and Perth-born European bar operator Daniel Moore, with 10 per cent.

Mr Bajaj said much of what worked at Dominion would stay.

“The reason we invested in the venue was to get the fitout and the team; to get (both) in the one place was a bit of a coup for us,” Mr Bajaj said.

“Most of the capital investment was essentially on technology.”

That technology investment included upgrading the machines, which had previously used coins, to work with RFID-enabled cards, which Mr Bajaj said would help collect data.

Mr Bajaj has a series of other hospitality interests, and a few ideas in development.

“The next project I want to do is a bowling bar,” he said.

“We’ll probably look at doing (another arcade bar) in the northern or southern corridor in Perth in the next couple of years.”

Another recent acquisition was the Beauvine Food & Wine festival, while Mr Bajaj said he had interests in technology businesses, generally those offering services that integrated into hospitality, such as data collection.

“What I generally find is I’m a jack of many (trades) and a master of none, so whenever I find someone who is playing to their strengths in a particular field, I’ll always have a cheeky investment in something like that,” Mr Bajaj told Business News.

“I’ve always believed that people that lead the way in small scale businesses are usually the most investible.”

“We’re really excited, we’ve moved it back into the city centre from Claremont Showgrounds to help boost hotel stays over the New Year’s Eve period.

About 2,000 people attend the festival annually from interstate and a further 300-400 from overseas, he said, with hopes to boost those numbers.

“Taking them out to Claremont Showgrounds really isn’t a reflection of what this state is,” Mr Bajaj said.

“Standing on Langley Reserve looking back up to the city while there’s world-class artists playing is really the experience that I wanted to create.”

One lesson he said he had learned on his entrepreneurial journey was the value of investing in building a business rather than just generating immediate patronage.

“It’s about retaining (customers) and growing them,” Mr Bajaj said.

An example of this was the Origin festival, where he said he had tried to draw a limited marketing budget as far as possible, enabling money to be invested in other aspects of the event.