Azumah Resources has confirmed the presence of a large mineralised system for the Bepkong East Lode of its flagship Wa gold project in Ghana after intersecting a 99.5 metre zone @ 2.16g/t gold from 316m down-hole that includes higher grade results of 10m @ 5.01g/t gold from 369m and 8.5m @ 5.82g/t gold from 406m. This provides further support for a potential future underground mining operation at Bepkong. 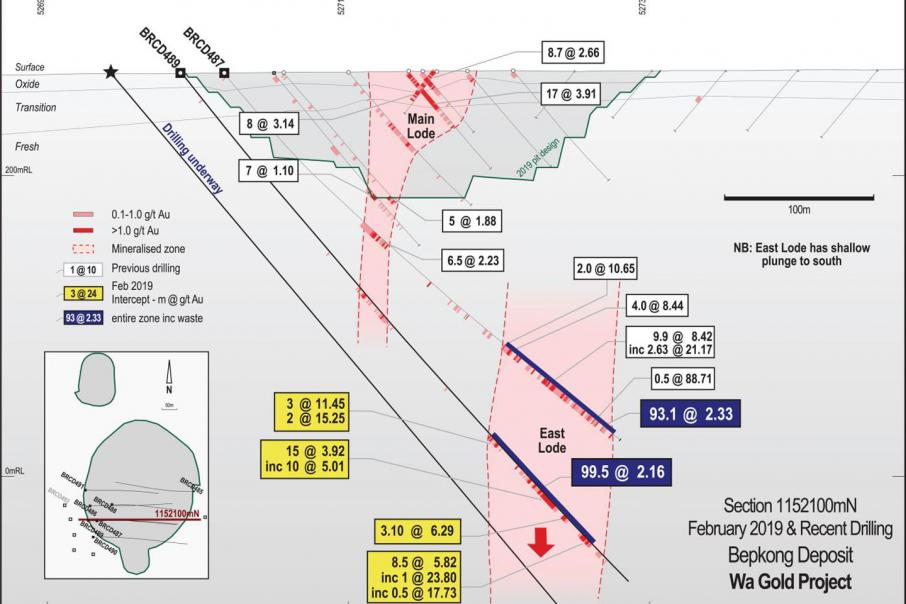 Azumah Resources has confirmed the presence of a large mineralised system for the Bepkong East Lode of its flagship Wa gold project in Ghana after intersecting a stunning 99.5 metre zone grading 2.16 grams per tonne gold from 316m down-hole.

The results provide strong support for a potential future underground mining operation at Bepkong that could add substantial value to the proposed 107,000 ounces of gold per year open cut mining operation.

Managing Director Stephen Stone said: “Intersecting 99.5 metres at 2.16 grams per tonne gold from 316 metres, some 75 metres below our recent and very similar ‘discovery hole’ intercept, is another remarkable result from the East Lode of the Bepkong deposit and clearly confirms the discovery of a large, well-developed, south-plunging, consistently mineralised system of unknown depth.”

“Importantly, the system contains several thick, high-grade ore shoots that could support declining down from the bottom of the planned open-pit and mining this mineralisation from underground.”

“The Azumah-Ibaera joint venture will now be extending and accelerating the drill programme at Bepkong so we can better understand the geometry and extent of the (underground) system and to enable us to rapidly move to a maiden resource estimate.”

This estimate was largely based around the key Kunche, Bepkong and Julie gold deposits with just under 94,000 ounces defined from completely new prospects.

Notably, the updated reserve estimate does not account for any of the recent, high-grade deep drilling results.

The company continues to advance its feasibility study for the Wa project which currently outlines a proposed 11-year project life, that produces a pre-tax NPV of USD$177m and IRR of 35%.

The project will reportedly return a pre-tax net cash flow of USD$270m with a payback of the USD$117m establishment capital in under two years.

The all-in sustaining cost of gold production is estimated at USD$886 per ounce over the life of the mine, which provides very healthy margins for the company.

A conventional carbon-in-leach plant with a nameplate capacity of 2.3 million tonnes per annum throughput is envisaged for the oxide ore streams emanating from the Wa gold project.

The feasibility study for Wa is expected in the third quarter of 2019, with a development decision expected shortly after that.

With the confirmation of a major, consistently mineralised gold system at the Bepkong East Lode, Azumah has strengthened the potential to bolt on an underground mining operation to its already attractive Wa open cut project.

Shareholders will be watching closely over the next couple of weeks as the company drives ahead with its accelerated drilling campaign.