Azumah Resources has outlined several new gold exploration targets from geophysical interpretations of a comprehensive VTEM survey at its emerging Wa East gold camp in northwest Ghana. The company says the 3km long Eve target has all the hallmarks of the Julie system nearby, which holds 834,000 gold ounces. The new target coincides with strongly anomalous gold geochemistry in surface sampling, but has not yet been drill tested. 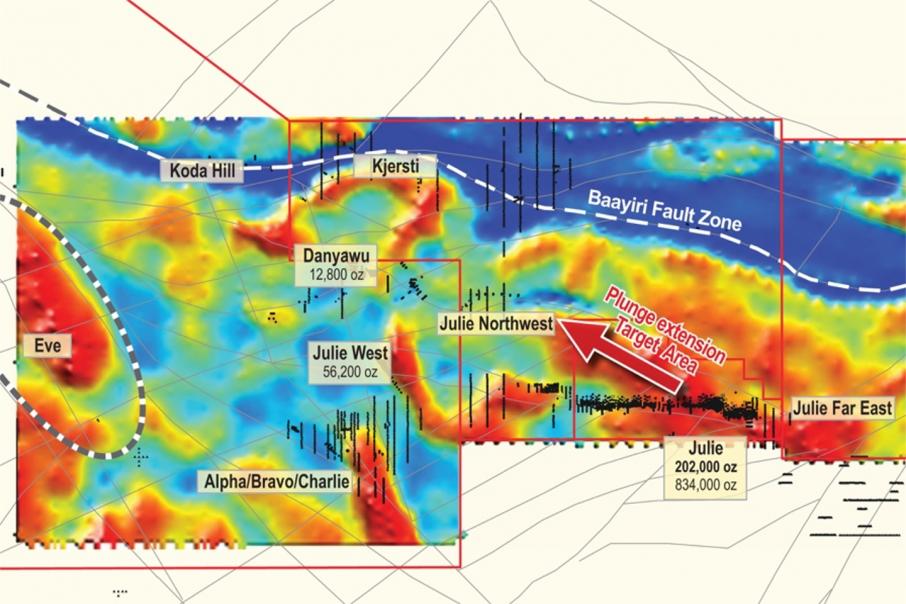 ASX listed Azumah Resources has defined a major gold exploration target at the new Eve prospect, located at its emerging Wa East gold camp in the north-western region of Ghana in West Africa.

The VTEM geophysical survey identified a discrete 3km long, north-westerly trending electromagnetic anomaly at Eve that the company describes as being very similar to the flagship Julie mineral system.

The Julie prospect already holds an impressive mineral resource of 834,000 ounces of gold.

Importantly, the new target coincides with strongly anomalous gold geochemistry in surface sampling, but has never been drill tested before.

The target lies at the intersection of a regionally prominent, northwest-trending splay fault off the Baayiri fault zone, which appears to be a major control on the distribution of gold mineralisation at Wa East.

Outside of the new Eve target, the comprehensive geophysical survey also delivered several new robust gold targets that will be high-priority drivers for exploration and a mineral resource expansion in this area in the upcoming field season.

The company recently completed a structural geological re-interpretation of the Julie deposit, which indicated there may be a northwest-plunging component to the gold mineralisation.

Importantly, this technical work is strongly reinforced by the results of the EM recent survey near Julie, which shows a clear plunge in that same direction.

These prospective positions have not been specifically targeted by exploration drilling in the past.

In that context, the major northwest-trending EM anomaly at Eve is perhaps a game-changer for Azumah, which is aiming to lift its current ore reserve beyond 1 million gold ounces to underwrite the economics of the wider Wa gold project.

The geophysical survey covered 247 square kilometres over a large section of the Wa East project, including across know gold deposits.

The beauty of the current survey results is that management can directly compare the new geophysical interpretation for prospective corridors against the existing locations of known gold mineralisation.

With this data, Azumah has been able to ascertain that its Kjersti and Danyawu prospects are very likely part of the same gold mineralised system, which again remains largely untested by subsurface drilling.

The latest exploration results continue to validate the view of the new Azumah-Ibaera JV that the Wa gold project in Ghana contains copious amounts of currently undefined gold mineralisation.

The new interpretation shows that plenty of potential exists in and around existing deposits and prospects.

Potentially exciting times lie ahead for these two JV partners in West Africa.