Azumah Resources has generated an updated ore reserve estimate of 18 million tonnes grading 1.77g/t gold for just over 1 million ounces at its Wa project in Ghana. This represents a 65% increase in the ore reserves last reported in 2014 and underpins a feasibility study that presently shows an 11 year project life, producing about 100,000 ounces per annum in the first 6 years. 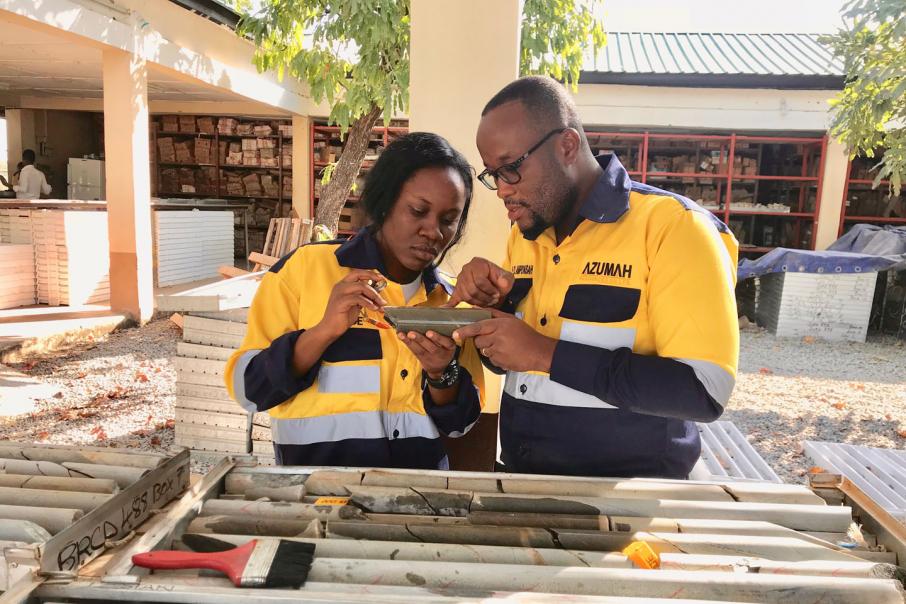 Ghana gold explorer Azumah Resources has achieved its goal of 1 million ounces in ore reserve at the developing Wa project in the northwest of the country, after unveiling a 65% increase in gold inventories from the previous 2014 estimate.

The company is now sitting on a 1.03 million ounce gold ore reserve, defined from an estimated 18 million tonnes grading 1.77g/t gold, based largely around its key Kunche, Bepkong and Julie deposits.

Adding interest, just under 94,000 ounces were defined from completely new deposits and the new reserve estimate does not account for any of the recent, high grade deep drilling results completed in potential underground mining positions below the existing gold deposits.

Back in September last year, Azumah updated its mineral resource estimate for the Wa project totalling 49.2 million tonnes grading 1.6g/t gold for just under 2.5 million ounces, from which this week’s ore reserve has been derived.

According to company management, the gold project has now been transformed into a compelling development opportunity, which will redefine the operational and financial metrics in line with its peers in the industry.

“The remainder of 2019 will be dedicated to finalising the feasibility study and putting everything in place for a development decision.”

“We also have several opportunities to materially enhance the Project, not the least through continued exploration of our vast 2,400 square kilometre prospective tenure - and these are all being vigorously pursued”.

The company continues to advance its feasibility study for the Wa project and currently outlines a proposed 11 year project life, that produces a pre-tax NPV of USD$177m and IRR of 35%.

The project will reportedly return a pre-tax net cash flow of USD$270m with payback of the USD$117m establishment capital in under 2 years.

The all-in sustaining cost of gold production is presently estimated at USD$886 per ounce over the life of the mine, which provides very healthy margins for the company, thanks to the prevailing USD$1300 per ounce gold price.

A conventional carbon-in-leach plant with a nameplate capacity of 2.3 million tonnes per annum throughput is currently envisaged for the oxide ore streams emanating from the Wa gold project.

The final feasibility study for Wa is expected in the third quarter of 2019, with a development decision expected shortly thereafter.

Significant inferred mineral resources exist within current mine designs and optimised pit shells and thus are fair game for potential conversion into ore reserves during 2019, with the completion of the required resource development drilling works.

The company is also particularly excited about the evolving underground mining options being presented via deep drilling intersections down-dip and down-plunge of the large Kunche and Bepkong gold systems.

The project is well-advanced with 15-year mining leases already granted and Environmental Protection Agency of Ghana or “EPA” permitting underway.

Ghana is considered a safe and stable operating jurisdiction in Africa and the project is serviced by excellent regional infrastructure, including grid power to site, easy access to water, enviable communications, a 2km sealed airstrip and a good quality bituminised and non-bituminised road network.

There is also a strong local endorsement of the gold project with no communities needing to be relocated or rehoused for its future development.

The entry of Ibaera Capital and its major funding transaction announced in September 2017, was the stimulus to accelerate the exploration and resource development efforts, that has ultimately led to the significant growth in the ore reserves announced this week.

Ibaera is investing close to A$17m in two stages over 2 years to acquire a 47.5% direct interest in the Wa gold project tenements and is managing the exploration and development activities of the JV on-site.

Azumah continues to deliver on its promises and the latent prospectivity of its Ghanaian Wa gold project and provides the canvas on which patient shareholders can finally see the bigger picture coming together for the company in West Africa.