Azumah builds case for underground mine in Ghana

Azumah Resources continues to build the case for underground mining at its flagship Wa project in Ghana after making further deep, high grade drill hits including 35m @ 4.7g/t gold and 5m @ 6.01g/t gold. The company said that the Bepkong system remains open at depth and along strike and that follow-up holes are underway to extend mineralisation in the Eastern lode. 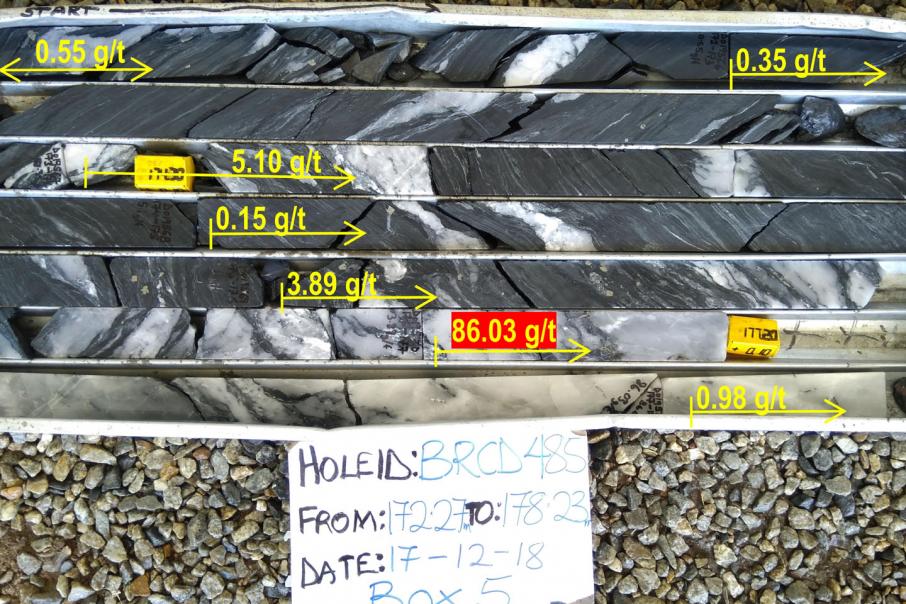 Underground mining is looking increasingly viable for ASX listed Azumah Resources to increase both production levels and mine life at its flagship Wa project in Ghana.

Notably, the Bepkong system remains open at depth and along strike with management saying that follow-up holes are underway to extend mineralisation in the Eastern lode.

The company said that inspection of drill core from all three Bepkong diamond holes drilled to date indicates that a very well developed mineralised system is present, increasing the likelihood that the near-surface and deeper mineralisation at Bepkong is part of a much larger, structurally controlled system.

Management said the continuously mineralized, 1.5km long Kunche deposit just 2km to the south, plus several satellite resources in between including Aduane, could all be part of a much larger interconnected mineralised system extending to considerable depth.

Azumah Managing Director Stephen Stone said: “A completely new geological dimension to the project has been introduced that could see a step-change in its scale, longevity and economics well beyond that envisaged in the pending Feasibility Study update.”

“Shareholders can look forward in early in January to some more results from deeper drilling at the Kunche deposit, then later in the month from follow-up drilling underway at Bepkong and then the much anticipated interim update of the Feasibility Study and Ore Reserve scheduled for the end of January 2019.”

The holes are part of the $4m, 40,000m drilling campaign that is funded and managed by joint venture partner Ibaera Capital, a Perth-based mining investment fund that also boasts considerable in-house geological expertise.

The program is designed to test for open-ended depth extensions to the bottom-of-pit high-grade mineralisation at the Kunche, Bepkong and Julie deposits in a bid to expand current resources and develop new prospects.

Ibaera is investing close to A$17m in two stages over 2 years to acquire a 47.5% direct interest in the Wa gold project tenements and it is managing the exploration and development activities of the JV on-site in Ghana.

This includes an ore reserve of 624,000 ounces going over the magical 2g/t gold mark.

Bepkong contributes substantially to these figures with a near-surface JORC resource of 245,000 ounces at 1.5g/t gold that includes an ore reserve of 113,000 ounces at 1.85g/t gold.

However, these numbers are starting to look increasingly conservative as Azumah continues to rake in deep, high grade gold hits that could open up the potential for underground mining beneath the existing pit bases.