WINNING an award can be a good way to get a business known and increase of customers; but White Salt owners Tim and Claire Leech say it's also a great staff retention tool. 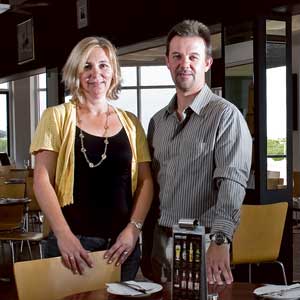 WINNING an award can be a good way to get a business known and increase of customers; but White Salt owners Tim and Claire Leech say it's also a great staff retention tool.

The Sorrento-based licensed café has won the Free Standing Licensed Café City/Metro Award each year since it opened in 2005.

White Salt also won the Premier's Award this year, which goes to the entrant who has achieved the highest percentage score over all.

The English-born couple say their Gold Plate Award success was also the achievement of a personal goal, as they endeavoured from day one to win three gold plates in the first three years of their business.

And, they say they made sure they involved their staff in the process.

"We based our training around the criteria that you have to meet to win the Gold Plate Awards," Ms Leech told Gusto.

"[The staff] were all very involved, we hold a lot of meetings during the [Gold Plate Awards] judging period...the award process completely helps retain staff and it focuses them on what they're doing," Ms Leech says.

The owners have also been keen to involve their staff in other award programs.

Employee Nicola Johnson won the Student Barista of the Year 2007, and Ms Clarke won the first place in the 2006 State Student Waiter of the Year competition.

Ms Leech, who taught at the Australian School of Tourism and Hotel Management said her background has been a plus when it came to recruiting and training employees.

And while staff shortages have been a major issue in Western Australia since the couple opened White Salt in 2005, the couple said they managed to get through thanks to their recruitment approach and company culture.

"We have been recruiting on attitude as opposed to skills levels...you can't teach attitude to someone, but you can teach them skills and thanks to my background I have been able to do that," Ms Leech said.

"We have focused on promoting them as much as we can."

The business now has 30 employees, including 16 permanent staff.

Situated in a prime coastal location, and with a 100 per cent extended trading permit granted a few months ago, White Salt is great venue to sip a cocktail while watching the sunset.

But, Ms Leech says the primary focus remains on the food.

The couple moved from England to start a business in Perth in 1995, but it took them ten years to take the big step of starting their own business.

Meanwhile, Ms Leech worked for the Esplanade Hotel in Fremantle and lectured at the School of Tourism and Hotel Management and Mr Leech worked as food and beverages manager for The Vines and spent a few years at Hotel Northbridge.

"When we came back to England for a holiday after 10 years in Perth, everyone asked us why we didn't start our own business yet...it was a reality check for us as we got into a routine and were just cruising along," Mr Leech says.

Mr Leech said they managed to get hold of the White Salt venue by being at the right place at the right time.

"One colleague told me that the café which used to operate in the venue, NV café, had just closed down...I contacted the owners straight away and we managed to get the space," he says.

White Salt seats 80 people inside and 40 in the alfresco area, it is open from Tuesday to Friday lunch and dinner, and Saturday and Sunday for breakfast, lunch and dinner.