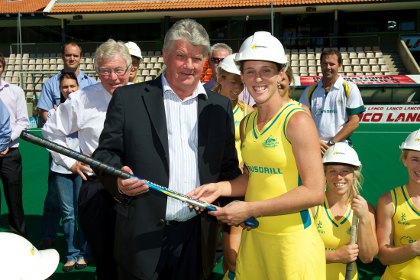 Mining services company Ausdrill has signed on as the major sponsor of the Hockeyroos, Australia’s women’s hockey team, in a two-year deal that ends a long search for financial backing.

The move by Ausdrill is the second significant move by a mining-related company to back a national hockey team. The Kookaburras wore Fortescue Metals Group on their shirts after the company became the naming rights partner for Hockey Australia's national indigenous program.

FMG founder Andrew Forrest has a connection to the sport through his family. It is understood that Ausdrill’s sponsorship was sparked by a Channel 10 news report which highlighted the fact the Hockeyroos, three times Olympic gold medal winners over the past 25 years, had not had a major long-term sponsor since a deal with Telstra ended after the 2000 Olympic games.

While hockey uncomfortably straddles the world of amateur and professional sport, developments such as a proposed IPL-style contest in India, where the sport is very popular, may change its dynamics in the next few years.

The Hockeyroos sponsorship comes at an intriguing time for Ausdrill whose founder and managing director Ron Sayers is defending charges of tax evasion.

The women’s team is heading to London as an outside medal chance, ranked below the top handful of nation’s led by The Netherlands, Germany and the highly favoured Argentinians, which just completed a series of test matches in Perth.

In Perth for the signing, Hockey Australia chief executive Mark Anderson said Ausdrill's financial support had buoyed the team and its management as a confidence-booster ahead of the London games later this year.

Mr Sayers said in a statement that Ausdrill recognised the sacrifices elite players made to compete at the highest level.

"Like most Australians, we have watched the Hockeyroos’ success over many years with a great deal of pride.  Ausdrill is therefore delighted to be coming on board to support the team in what is shaping up to be a very big year in the sport," he said.

The two year deal has an option for both parties to extend.