Auroch enters land of the giants in Portugal

They say if you want to go hunting for giants you need to go to the land of the giants. Auroch Minerals appear to have done just that after securing a farm in agreement to earn up to 75% of the Alcoutim Copper, Zinc, Lead, Gold and Silver Project in Portugal. It is just 20km from the massive Neves Corvo mine that has proved up 8mt of copper and zinc concentrates over time. 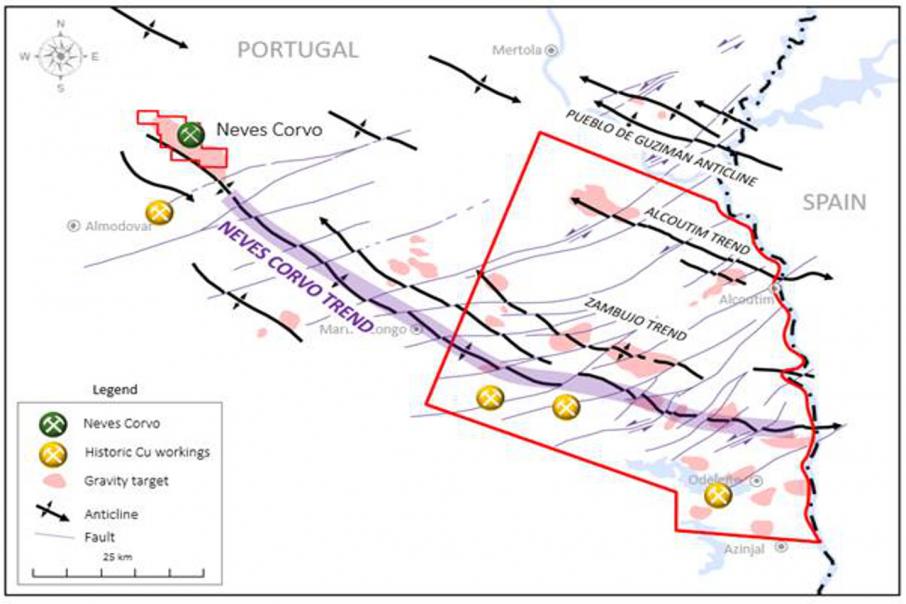 They say if you want to go hunting for giants you need to go to the land of the giants.

Perth based Auroch Minerals appear to have done just that with the announcement today they have secured a farm in agreement to earn up to 75% of the Alcoutim Copper, Zinc, Lead, Gold and Silver Project in Portugal.

Auroch M.D and 25 year geologist Andrew Tunks described the Alcoutim project as “one of the most exciting exploration target’s’ he has ever been involved with and if the near-ology is anything to go by he just might be right too.

The project boasts 576 square kilometres of ground in the famed “Iberian Pyrite Belt” in Portugal.

It is immediately along strike and down plunge from the “super giant” Neves Corvo mine owned by Canadian listed Lundin Mining who’s $5.5b market cap makes them one of the world’s most significant mining companies.

Neve’s Corvo contains a massive cocktail of metals including copper, zinc and silver and Auroch’s new project appears to sit on the same geological structure just 20 kilometres down the road.

Lundin Mining’s latest estimations for their Copper zones at Neves Corvo include a 91 million tonne resource grading 2.5% copper and 1.1% zinc with 116 million ounces of silver grading 43 grams per tonne.

The Zinc zones are equally impressive with the latest resource estimate of 118 million tonnes grading 5.9% zinc and 0.3% copper with around 216 million ounces of silver grading 57 grams per tonne.

The Iberian Pyrite Belt is home to over 80 known deposits and resources totalling in excess of 1,700 million tons of mineralized ore. It boasts 10 “giant” deposits of more than 100Mt of ore and 3 “Super Giant” deposits with more than 200Mt of ore.

Interestingly the 250km long Iberian Pyrite Belt is also the birth place of Rio Tinto. Their original mine that carries the Rio Tinto namesake, just 100km from the Alcoutim project, has churned out over 3m tonnes of copper and zinc concentrate. The ancient mine became Rio Tinto’s springboard to stardom when the original Rio Tinto investors came together in 1873.

Within a year of the initial discovery, another three sizeable deposits were unearthed at Neves Corvo and the operators ultimately proved up some 8m tonnes of copper and zinc concentrate across what would eventually be seven deposits.

Auroch’s Alcoutim project is littered with historic copper workings and already has 22 drill ready geophysical targets that are planned to be drilled immediately.

According to the company, the major gravity highs mapped at Alcoutim are very similar in nature to the anomalies that were the subject of the initial exploration activities at Neves Corvo.

Auroch will spend A$1.4 million to earn a 65% interest in the Alcoutim Project after which they will have the right to earn a further 10% by spending another  A$1.25 million.

Auroch CEO Dr Andrew Tunks said; “This is one of the most exciting exploration targets I have been involved in. At the Alcoutim Cu-Zn Project, we are directly along strike and down plunge of the Super Giant Neves Corvo mine. Within the licence there are multiple coincident magnetic – gravity – EM anomalies and our plan is to test these with diamond drilling immediately. Each hole will undergo a complete series of down-hole geophysical tests which substantially increases the search radius for massive sulphide and stockwork VMS copper-zinc deposits.”

With over $8m in cash and only 85m shares on issue, Auroch should be able to sniff something out at Alcoutim if there is indeed something lurking out there.

And in the land of the giants where nothing is considered small, any kind of early exploration success at Alcoutim could set Auroch’s stock alight.