Auroch ekes out 17 mineral targets from old data in S.A.

Auroch Minerals has announced that it has generated 17 interesting looking base metal and gold exploration targets by reinterpreting old geophysics data at its Bonaventura project on Kangaroo Island, southwest of Adelaide. Three priority, high grade zinc targets will undergo surface geophysics ahead of the drilling programs with the new targets broadly coinciding with recent high-grade surface sampling. 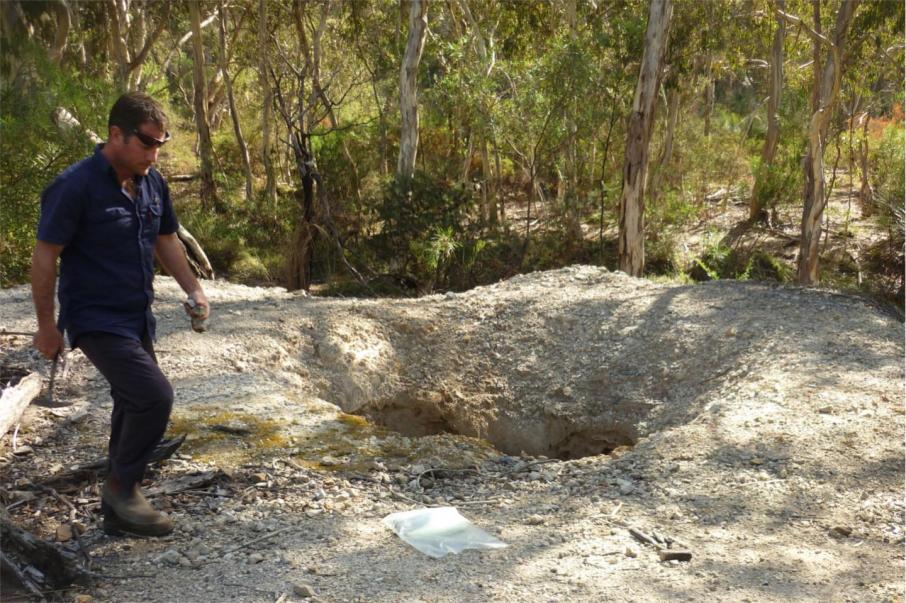 ASX listed Auroch Minerals has identified 17 base metal and gold exploration targets at its new Bonaventura base metal project, located near the northern tip of Kangaroo Island, about 170km southwest of Adelaide.

The company dusted off a swag full of old aeromagnetic, radiometric, gravity and induced polarisation geophysical surveys for the project and reprocessed and reinterpreted the data to produce the new targets.

Auroch is seeking to delineate economic zinc, lead, copper, silver and gold mineralisation at the prospective looking project, that has similar geology to the Adelaide geosyncline on the mainland.

Auroch’s 100%-owned Bonaventura project has an area of 234 square kilometres and importantly, it covers about 30km of strike along a regional scale fault system that contains many historical, small-scale base metal and gold mine workings.

These old workings include the artisanal Grainger zinc mine that returned rock chip samples up to 28% zinc and significant lead, copper and silver grades. Previous drilling there produced a 16m intersection grading 3.4% zinc and 0.7% lead from 52m down-hole.

Another walk-up target exists at the Kohinoor prospect, which produced rock chip sample results up to 33.3g/t gold from observed mineralisation in quartz veins.

A detailed soil sampling program conducted over the project area shows very strong zinc and lead anomalism coinciding with the major structures in sedimentary rocks, interpreted to control the mineralisation in the area.

Importantly, the reinterpretation of the geophysical data has also shown up additional prospective faults and splay positions, that are potentially prospective exploration targets in their own right.

In total, 3 priority exploration areas were established, with land access and permitting for the maiden drilling program on these targets already well advanced.

The company plans to undertake new induced polarisation geophysics on the priority targets to better delineate strike, location and the strength of the metallic conductors at depth.

With excellent access and infrastructure at the project, the survey, which is expected to commence in June, will only take about 7-10 days to complete.

The company will then immediately process and interpret the new data in order to tweak the planned drilling program, which will kick off early in the September quarter this year.

Auroch Minerals’ Executive Chairman Glenn Whiddon said: “The 17 exploration target areas identified from the reinterpretation of the historical geophysical data is a confirmation of the exciting potential of the Bonaventura Project for both base-metal and precious-metal mineralisation.”

"The planned IP survey will provide us with further detailed structural and lithological information that will be an integral part of defining targets for our maiden drill programme.”

“In conjunction with this, the access and permitting processes are well-advanced and the Company remains on-schedule with its aggressive exploration programme to systematically evaluate multiple target areas at the Bonaventura Project during Q3 2018”.

Auroch has been busy in South Australia, having also recently picked up a 90% stake in the Arden base metal project, 3.5 hours north of Adelaide by road.

The target mineralisation at Arden is high-grade zinc, copper, cobalt and manganese mineralisation and the area contains numerous artisanal mines for these commodities that were worked over between 1850 and 1920.

No systematic modern base metal exploration has ever been undertaken at the Arden project which will also be a major focus for the cashed-up Auroch.

The company is planning an aggressive and systematic set of exploration programs across its new South Australian assets based on its reinterpretation of the old data.

With 17 well defined targets on the table, Auroch will no doubt provide some excitement for its followers in coming months.