Aspire Mining says that a proposed rail line that will link its Ovoot coking coal project in Mongolia to the proposed Kyzyl - Arts Suuri section of the Russian rail network at the border port of Arts Suuri is viable. The 238.6km rail line will cost USD$581.8m, which is in the range estimated by a scoping study completed in 2015 and comparable to the Erdenet to Ovoot feasibility study. 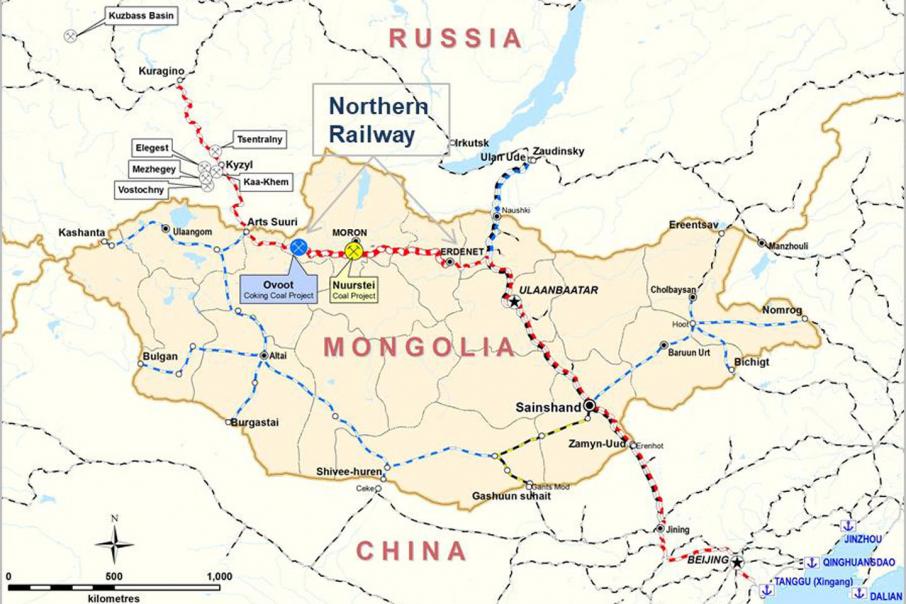 Aspire Mining has received a boost with a preliminary study finding that a proposed rail line between its Ovoot coking coal project in Mongolia and the Russian-Mongolian border port of Arts Suuri is both technically and commercially viable.

A railway development is the key to full scale development of Aspire’s Ovoot project, which has an ore reserve of 255 million tonnes of premium, metallurgical coal.

The preliminary economic assessment, or “PEA”, commissioned by its rail subsidiary Northern Railways, found that a 238.6km rail line from the project to the Russian border junction would cost USD$581.82m.

This will link with the proposed Kyzyl - Arts Suuri section of the Russian rail network, connecting the project to export markets.

Aspire said the price is in line with an earlier scoping study completed in 2015 and comparable to the Erdenet to Ovoot feasibility study completed by Northern Railways consortium partner China Gezhouba Group in March this year.

The proposed railway will have capacity of up to 15 million tonnes per annum with capacity for later expansion and it will use the Mongolian class 2 railway design standards to ensure compatibility with the Erdenet - Ovoot rail project.

Opportunities to further reduce construction costs have also been identified in the PEA.

It is assumed that the Kyzyl - Arts Suuri rail line will be a multitask freight service with two way transport of container freight, coking coal and other resource and agricultural commodities.

The company also said the Ovoot - Arts Suuri rail would link with planned rail developments in the Tuva region in southern Russia.

Russia is currently carrying out a PEA on a railway line to link Kyzyl to Arts Suuri to extend the Kuragino to Kyzyl rail line. This extension is currently targeted for completion in 2022.

The corridor is a combined initiative of the Mongolian, Chinese and Russian Governments.

Aspire said that linking the Erdenet - Ovoot Railway into the Northern Rail Corridor would substantially improve economics for all stakeholders.

The recently completed feasibility study for the Erdenet - Ovoot railway assumed that Mongolian-only domestic freight volumes would take up 16Mtpa of the planned 30Mtpa capacity.

Using more of the full capacity would increase the financial robustness of the railway significantly.

In addition, increasing two-way freight volumes on the Northern Rail Corridor will drive increases to capacity and improve efficiency along the Trans Mongolian Railway.

“The company has provided this PEA to the Mongolian Ministry of Roads and Transport and Mongolian rail operator UBTZ Railways JSC to provide further justification to proceed to implementing the Ovoot to Arts Suuri rail project as part of the Northern Rail Corridor.’’

Aspire recently secured a $15m financing package to fully fund feasibility studies for the mine and road components for an early development of Ovoot.

This will involve producing material quantities of washed coking coal from a starter pit and trucking it along a temporary haul road along the future 547km Erdenet to Ovoot rail path to the existing rail head at Erdenet.

This could unlock early cash flows from Ovoot for Aspire within 12 to 15 months after all approvals are received, funding is committed and a decision to mine is made.