Artemis Resources has beaten Rio Tinto to a 600km2 exploration licence application that is located just 40km east of Newcrest Mining’s Telfer copper-gold mine in Western Australia’s Pilbara region. The prospect, which will take Artemis’ Pilbara landholdings up to about 2400km2, also hosts the northern extension of the same geological structure that hosts London listed Greatland Gold’s Haverion copper-gold discovery. 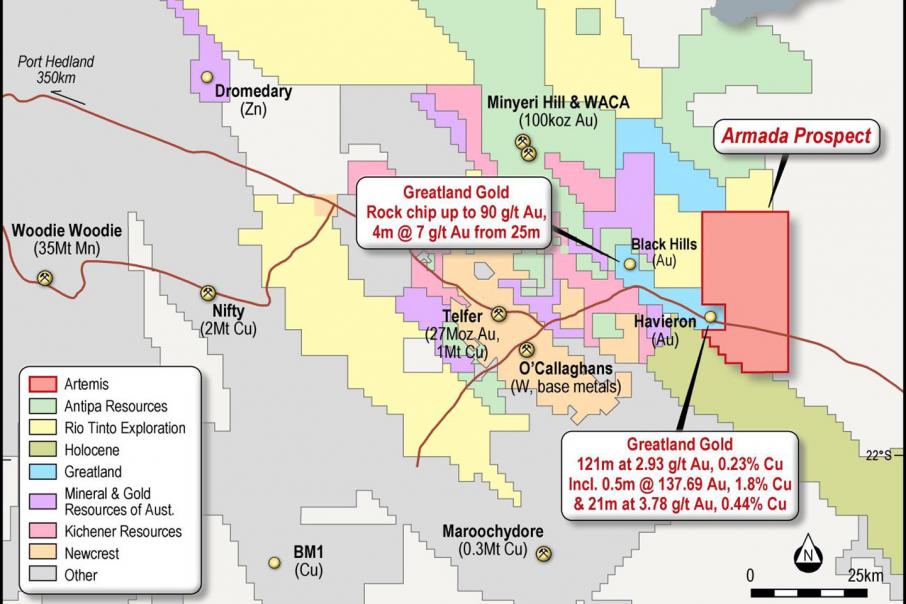 The small cap junior explorer applied for the 600 square kilometre tenement, known as the Armada Prospect, about 3 hours before Rio Tinto, which perhaps says something about its prospectivity.

Armada is located in the highly sought after Paterson Ranges.

Artemis said in a market update this week that the geological structures that host the Haverion discovery in the adjacent permit run due north into Armada.

Early stage exploration drilling by London listed Greatland Gold at Haverion returned some highly anomalous copper and gold hits, the best of which was a 121m drill intersection going 2.93 grams per tonne gold and 0.23% copper from 497m downhole.

Armada also hosts northwest to southeast structures that are consistent with other observed mineralised trends.

Artemis Chief Executive Officer Wayne Bramwell said: “The existence of major mining operations in the Proterozoic Orogen such as Telfer and Nifty, coupled with the recent early stage exploration success by Greatland Gold at their Haverion discovery has provided impetus for the company to further expand its exploration holdings in the Pilbara.”

“The Armada Prospect sits within the well-endowed Paterson Orogen mineral province, of what may become a new region for iron oxide copper gold (IOCG) deposits.”

The Armada Prospect is also close to Newcrest’s O’Callaghan’s Deposit and Metals X’s Nifty copper mine.

The area has sealed roads and rail networks nearby which branch out from the regional industrial hub of Port Hedland, 500km to the west.

Armada’s proximity to existing mines including Telfer and Haverion’s serious copper-gold discovery places it in an excellent and highly prospective mineralised region.

That Rio Tinto would seek to get its foot on the same patch of land also somewhat validates Artemis’ decision to apply for the tenement.