Artemis Resources has penetrated 300m of a felsic intrusive rock during a deep drilling program, 65km south of Karratha in the Pilbara. Such intrusions “invade” the in-situ rock sequences in a hot fluid state and cause significant cracking due to the high temperatures involved and the extreme pressures. The intrusions can be the source of economic ore deposits, if they originally contained dissolved metals. 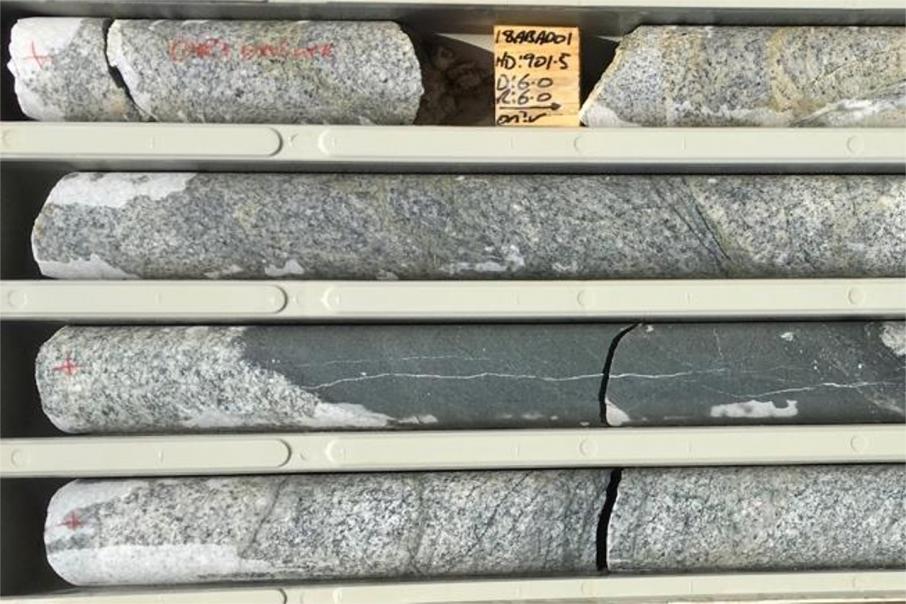 ASX listed Artemis Resources has provided a pulse quickening update on its “super-deep” diamond drill hole being drilled 43km south of the company’s Radio Hill operations, near Karratha in the west Pilbara region of W.A.

The 3.3km planned drill hole reached a depth of 943.5 metres this week and unexpectedly intersected a felsic intrusive rock type commencing at a down-hole depth of 644.4m.

The change in the geology was unforeseen, with the company saying that the identification of the intrusive body in the sedimentary basin was encouraging and supportive of the significant varied mineralisation in the region.

Intrusive rocks effectively “invade” the existing rock sequences in a hot fluid state and cause significant cracking due to the high temperatures and extreme pressures involved. They can sometimes be the source of major ore deposits, if the fluids contain dissolved metals of economic importance.

The current drilling rate has fallen to about 50 metres per day, based on the hardness of the felsic intrusive being intersected at present.

The new drill hole is effectively “twinning” a 2.27km long deep diamond drill hole completed by CRA Exploration in 1986, located about 11km to the south south-east of Artemis’ super-deep hole.

The plan was to correlate or “line-up” the geological sequences from the two deep holes and determine the thicknesses and approximate dips of the sedimentary and volcanic rock formations from both locations.

The intersection of the felsic intrusive with alteration, bleaching, quartz veining and narrow dolerite dykes has thrown up some previously unexpected possibilities for Artemis, as it looks to decipher the processes controlling the ore mineralisation in its vast west Pilbara tenement holdings.

The company recently committed to a major $5.4m exploration and development work program with its 50/50 JV partner Novo Resources, aimed at proving up grades and tonnages at the focal Purdy’s Reward conglomerate and paleoplacer gold deposits.

Beyond that, Artemis is actively exploring for hard rock gold, cobalt, copper and platinum group metal deposits in the Pilbara and it also has interests in diamonds and base metals within a 60km radius of the Radio Hill plant.

It will be interesting to see what the company drills through in the coming weeks as its super-deep hole penetrates towards the basement rock sequences in this very ancient landscape.