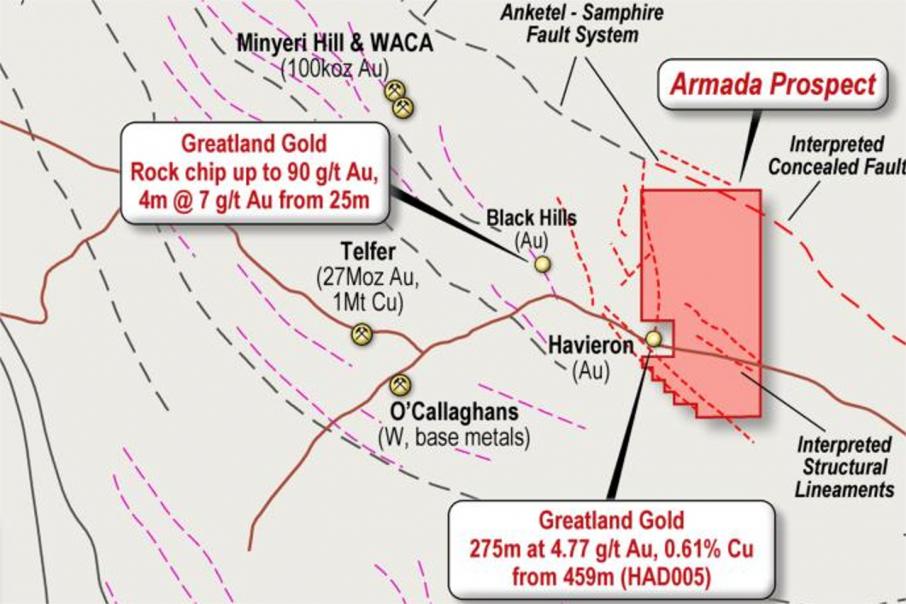 ASX listed multi-commodity explorer Artemis Resources will kick off its regional exploration program in the emerging Paterson Range area of the eastern Pilbara, with a low level, high-resolution, aeromagnetic survey.

The company holds 600 square kilometres of prospective looking ground at its Armada prospect, located only 40km east of the mammoth Telfer gold mine that has produced over 27 million ounces of gold and 1 million tonnes of copper to date.

The Artemis exploration licence is surrounded on three sides by UK-listed Greatland Gold Plc who has recently released spectacular deep drilling results from its nearby Havieron project.

Unsurprisingly, these results lit a fire under Greatland’s share price, which has more than doubled since it released the initial drill intersections in late June.

Greatland said the alteration and mineralisation drill tested at the Havieron project displays similarities to the major iron oxide-copper-gold deposits known as “IOCG” deposits at Olympic Dam in South Australia and the revered Ernest Henry mine in western Queensland.

The geological and assay data from Havieron in Western Australia potentially indicates that a large IOCG mineralised ore system may be present there.

The Havieron project and hence Artemis’ Armada prospect are also reported as being close to Rio Tinto’s rumoured new major copper discovery in this region of the rapidly developing Paterson province.

Artemis Executive Director Ed Mead said: “With increasing newsflow about Rio Tinto’s exploration efforts in the Paterson Range and the recent excellent gold/copper results from Greatland Gold’s Havieron project that is contiguous to Artemis’ Armada prospect, the time to further investigate our ground is right. To kick off our exploration in this highly prospective region a detailed high resolution magnetic survey will now commence.”

The company has charged local firm Southern Geoscience Consultants with the task of reviewing all the available geophysical data for the Armada prospect tenement area.

The contractor revealed that magnetic features noted from the coarse airborne magnetic data covering the region showed areas of interest for immediate follow-up.

A detailed, higher resolution, low level airborne magnetic survey will soon be undertaken over the western side of the exploration tenement to assess these interpreted magnetic features.

Artemis has secured itself some prime real estate in this blisteringly lucrative exploration region of WA and it will now be keen to emulate the success of its peers as it searches for a next world class deposit in this remarkably underexplored region.