Artemis Resources has completed a ground geophysical gravity survey program over priority exploration targets it defined in January over the Armada project in the emerging Paterson Range copper-gold province of WA. The company will now integrate the processed gravity data with the recently collected magnetic data to identify and prioritise potential drilling targets at the intriguing project. 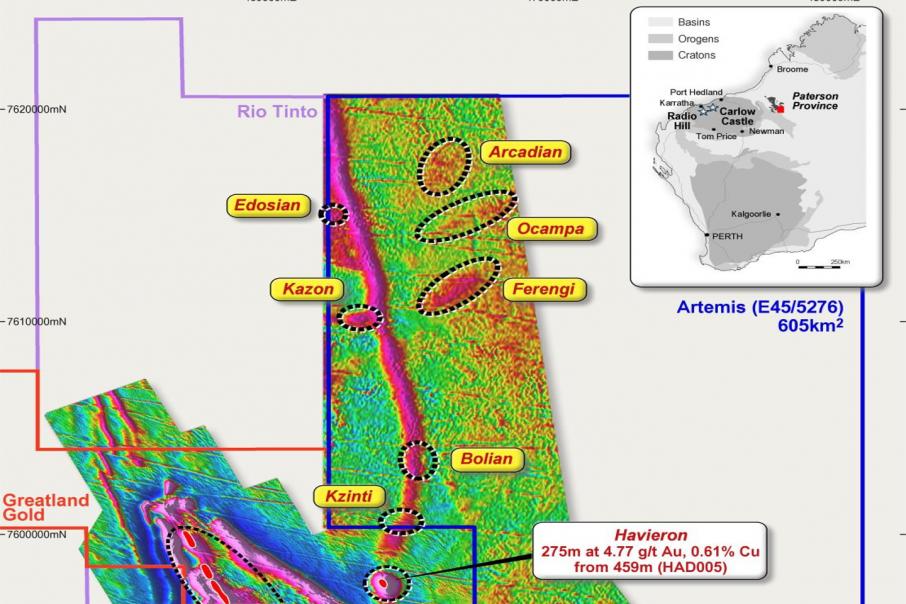 According to the company, processing of the data is ongoing and it will report the results as they become available over the coming week or so.

Artemis will then integrate the processed gravity data with the recently collected airborne magnetic survey data to commence tying down potential drilling targets at this intriguing project.

In January, the company delineated eight targets of interest from the magnetic data, that all lie within a 22km radius of Greatland Gold’s compelling Havieron copper-gold discovery.

Earlier this week, Greatland announced a USD$65m farm-in agreement with Newcrest, for the latter to earn up to 75% of that project and quickly advance exploration and resource development on the ground.

Artemis Executive Director Ed Mead said: “The deal signed by Greatland Gold on their Havieron gold copper discovery near Telfer, with Newcrest, is evidence of the potential and belief in this area. Rio Tinto have also announced the discovery of a large copper discovery at Winu.”

“Both Havieron and Winu are quite extraordinary and provide a compelling argument for Artemis to progress this now granted Armada project.”

“The latest ground-based gravity survey has been completed and will be integrated with airborne magnetic data captured by Artemis earlier this year. Artemis surrounds Havieron on three sides and right now we see this project as one of the most exciting in the company’s extensive Pilbara tenement portfolio.”

The company’s Armada project is effectively surrounded on three sides by Greatland’s tenement and hence, quite a prospective and strategic bit of real estate in the Paterson geological province.

The excitement comes from Greatland’s maiden diamond drilling program at Havieron last year that turned up 121 metres grading 2.93g/t gold and 0.23% copper from 497m down-hole, that followed up on earlier work completed by Newcrest Mining.

Artemis’ great hope of course, is that it can cash in on the nearology of those company-making drilling results in its newly granted Armada ground.

According to company management, the recent gravity survey program might also outline further anomalies that currently have no coincident magnetic signature at all.

Now that would be a game changer for Artemis in this emerging region in the eastern Pilbara region of WA.