Perth’s apartment market has shifted up a gear with off-the-plan sales jumping on the back of interest rate reductions and the rental squeeze. 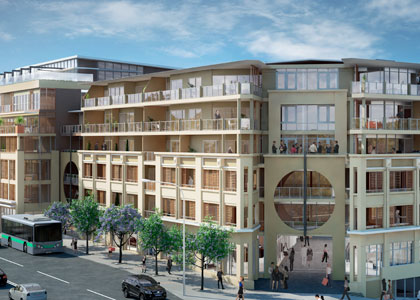 IN EARLY: An artist’s impression of AFG’s East Fremantle project, the Richmond Quarter, where about 60 per cent of the units have been taken up ahead of the formal launch.

Perth’s apartment market has shifted up a gear with off-the-plan sales jumping on the back of interest rate reductions and the rental squeeze.

RESIDENTIAL affordability is back on the agenda as a jump in Perth apartment sales triggers warnings of a spike in prices.

In a sign that residential property prices could be poised to take off, inner-city real estate agents are trumpeting pre-sales and buyer interest at levels equal to ‘pre-GFC’ conditions.

It sounds like another great story from Australia’s powerhouse economy, but Gavin Hegney warns there aren’t many winners when demand outstrips supply.

The Hegney Property Group founder said buyer activity for properties priced $850,000 and above was strong, and the top of the mortgage market - the $1.5 million to $3 million band -had the potential to overheat.

While this type of commentary has the potential to be self-fulfilling, with just two months worth of housing stock currently on the market Mr Hegney said conditions were ripe for a bubble.

“I don’t think this is a boom; it’s just a 12 to 18-month pressure point, but that can affect affordability.

“We can’t have population increasing, vacancy rates falling and the number of properties on the market falling without a crunch.”

It’s a great time for developers and commercial agents to be marketing projects.

Half the apartments in Psaros’ Marq Apartments complex in West Leederville sold in the first week following its public launch in January.

The property division of AFG is close to launching the formal campaigns for two apartment projects around Fremantle, but managing director Brett McKeon said it had already achieved strong sales.

The higher profile of the two projects is its $160 million North Fremantle development on the former Rolly Tasker Sails site, an elevated block with river views.

AFG funded the acquisition of the land for this project through a prospectus and Mr McKeon said it had already picked up a number of sales.

“The medium price in that project is about $1.25 million; we will have product for as little as $500,000 but the nice thing is it’s showing the market is coming to life at the top end,” he said.

“It’s been running quite hot at the bottom end for about six to 12 months, but we are really starting to see a lot more activity at the high end.”

Again, the formal launch is yet to happen, but about 60 per cent of the units have already been taken up, including the $1.5 million penthouse apartments.

It’s a strong result for AFG’s property business but Mr McKeon shares Mr Hegney’s concern about the trajectory of Perth house prices over the next 12 months.

“For a long time the market has been soft because of all the negative sentiment at home and abroad, so people have deferred buying decisions,” Mr McKeon said.

“But it’s showing signs it might be about to push upwards and onwards in a silly way again, which wouldn’t be great.

“And at the other end of the spectrum ... term deposits and other savings instruments are offering investors less and less yield, which is making them consider blue chip stocks and property again.”

The combination of these factors is driving apartment sales, but in its wake is the city’s battered affordability rate, which is likely to take another hit if the predictions of a property price spike are right.

It puts the Reserve Bank in a difficult position of balancing soft housing markets on the east coast with a potential west coast price spike.

“If I was at the Reserve Bank and just looking at the Perth market I would have one finger on the interest rate rise button,” Mr Hegney said.

House prices are unlikely to jump by anywhere near the 20 per cent per annum rises experienced in the last boom, but Mr Hegney warned growth could run close to double the sustainable longterm average of about 5 per cent.

For buyers it was a call to action, and similarly Mr Hegney said it could pay to move quickly if you were planning to build or renovate to beat likely increases in building costs as the home building sector heated up.

Buyers are already driving down affordability in the inner-city, pushing the East Perth median unit price to a record high of $540,000 this year.

MLG Realty claimed the Perth CBD market was the busiest it had been since the GFC and home opens for apartments under the $600,000 price point were attracting big crowds and offers over the asking price.

The Real Estate Institute of WA’s research backs up these claims.

It takes just 38 days, on average, to sell a CBD property in the current market, which pegs the sale rate at its fastest pace in seven years.