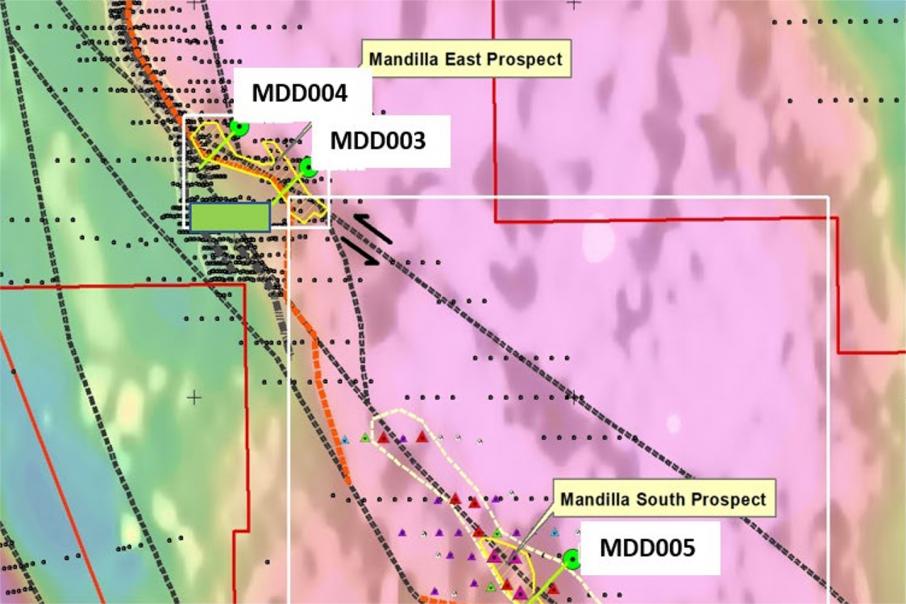 At Mandilla East, multiple intercepts of high-grade gold were delineated beneath an existing supergene-enriched blanket of mineralisation, including 2.7 metres grading 46.1 grams per tonne gold from 123.3m down-hole, incorporating a metre intersection going nearly 4 ounces to the tonne gold from 124.3m.

In addition, the same drill hole also unearthed 1.4m @ 7.1g/t gold from 214.7m down-hole, which is situated about 80 metres vertically below the other anomalous results and well into the fresh granite host rock.

According to Anglo, the drilling at Mandilla East shows that the prospect has unrealised potential for a steep-dipping gold mineralised envelope zone within the granite, with an impressive apparent width of about 70 metres.

The broader Mandilla project lies on the western margin of a porphyritic intrusion known as the Mandilla Granite, which has intruded the greenstone sequences in this region.

Mandilla East and Mandilla South both lie within the Mandilla Granite and hug the contact with the sedimentary rocks, located to the southwest.

The aim of the recent drilling program was to target gold mineralisation both within the existing supergene-enriched horizons and beneath the previous RC drilling programs, to specifically test for bedrock gold anomalies.

At Mandilla South, about 1.3km southeast of Mandilla East, Anglo completed one diamond drill hole beneath the supergene mineralisation and into the bedrock portion of the Mandilla Granite that also returned anomalous gold results.

Mandilla South is defined by a 2km long trend of anomalous supergene gold mineralisation, with peak values exceeding 5g/t gold over a strike of 300m within the same trend.

Based on this, the intriguing high-grade assays returned from bedrock positions within the granite host at Mandilla South are considered “pretty exciting”, according to the company.

The short drilling programs at Mandilla East and Mandilla South were co-funded by the WA government under its Exploration Incentive Scheme.

Anglo will now complete follow-up RC drilling at the Mandilla project, with 5,000 metres planned in 30 holes across the area, once all approvals are in place.

Anglo Australian Chairman John Jones said: “The results of this diamond drilling campaign at Mandilla are very encouraging. With 38,000 ounces of gold already the subject of a resource at Mandilla East and to now identify the prevalence of thick sections of gold mineralisation with intervals of high-grade gold exceeding 20g/t Au at depth augurs well for what might well be a significant upgrade.”

“On top of that, to now confirm the presence of significant bedrock mineralisation at Mandilla South, a plus two-kilometre-long supergene gold target with a plus 5g/t Au 300 metre core, is also pretty exciting.”

“I take the opportunity to thank the WA Government for its Exploration Incentive Scheme initiative, because of which, discoveries such as this are made possible.”