Anglo Australian Resources has gone back to the future to squeeze more ounces out of a gold prospect near Kalgoorlie that netted it a tidy sum of gold back in 2006 and 2007. The company has kicked off a 70 hole drill campaign to revisit the Mandilla project where it previously identified a near-surface weathered bedrock target with a strike of more than 1.5km.

Previous wide spaced RC and air-core holes drilled at the Mandilla South prospect in 2017 identified a near-surface, weathered bedrock target extending from the northwest to southeast strike areas covering more than 1.5km in length with a width of about 100 metres.

Gold values exceeding 1 gram per tonne were recorded in most of the holes along the trend with a top result of 2 metres grading 6.2g/t gold from 42 metres down-hole.

Anglo said the gold values indicate a likely supergene-enriched gold zone at a vertical depth of 40m to 50m.

The company will drill 70 holes totalling 5000m along 10 variably spaced lines to infill previous drilling and extend the size of the target.

A parallel structure, interpreted to lie 200 to 400 metres west of the main target that also returned significant gold anomalisms will be tested on several of the proposed drill traverses.

Anglo was recently granted $100,000 in funding assistance by the Western Australia Department of Mines and Petroleum for the drilling of three deep diamond drill holes at Mandilla South.

The company will use these funds to test the key gold mineralised structures at Mandilla South that are identified through the current and previous drilling campaigns.

The project is situated in the northern part of the Widgiemooltha corridor which hosts significant nickel and gold deposits including the plus 1 million ounce Ghost Crab deposit about 30km to the north and the high grade Wattle Dam deposit just 3km to the west.

Gold mineralisation at Mandilla is related to extensional quartz vein arrays that have visible gold and potentially shear-hosted lodes in the Emu Rocks granite.

Ore from Mandilla was treated at the nearby Higginsville processing plant.

Last month, Anglo discovered a potentially 200m long zone of mineralisation at its Feysville Gold Project just 14km south of Kalgoorlie that is located parallel and to the west of the very prospective Ethereal Shear Zone after a hole intersected 20m @ 2.41g/t gold from 96m down-hole.

Anglo is looking the create some good old fashioned Kalgoorlie gold excitement at both Mandilla and Feysville in the Goldfields and if early indications are anything to go by, it may end up doing just that.

Substantial shareholders as published in the annual report.
END_OF_DOCUMENT_TOKEN_TO_BE_REPLACED
Powered by Morningstar ®
Next Articles

Anglo back on site at Mandilla 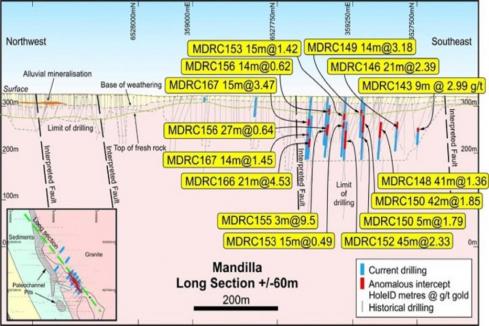 Investors shrug off market woes to plunge $5.5m into Anglo