Anglo Australian Resources has outlined a maiden mineral resource of 2.86 million tonnes grading 1.3g/t gold for 116,100 gold ounces at its Feysville project, 14km from Kalgoorlie, WA. The new estimate is complemented by excellent metallurgical results for the deposit’s ores, which show a 99.5% recovery for the near-surface, supergene gold mineralisation that makes it ideal for potential toll milling options in the immediate area. 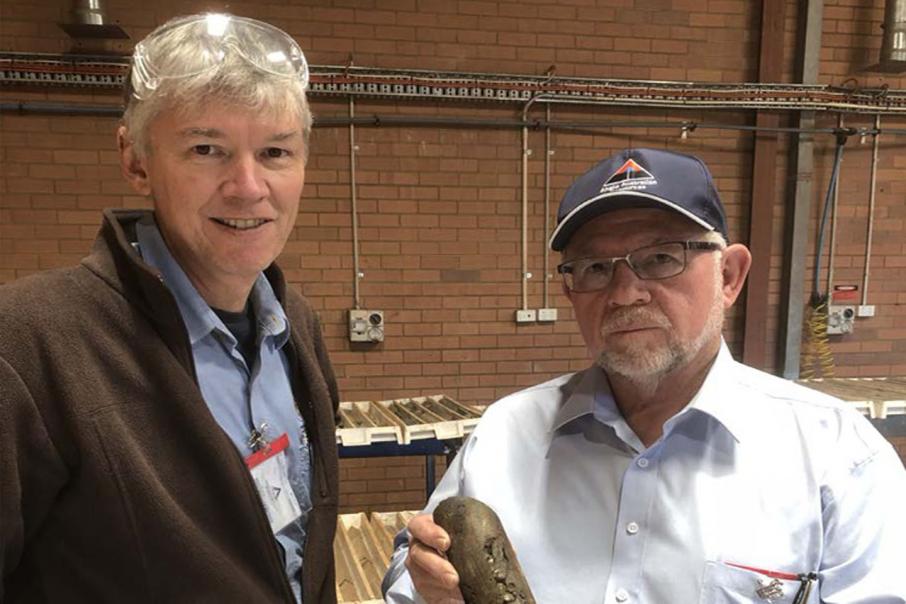 Anglo Australian Resources has revealed a maiden mineral resource of 116,100 ounces of gold at its Feysville project, 14km from Kalgoorlie, WA, less than two years after drilling commenced in earnest.

The new resource at the emerging Think Big prospect totals 2.86 million tonnes grading 1.3g/t gold, with 80% of the material classified in the more confident indicated category, from which future ore reserves can be won.

Importantly, more than 20,000 ounces of the indicated resources lie within a higher-grade, near-surface supergene oxide zone that bears an impressive grade of 2.2g/t gold.

According to Anglo, mineralisation at Think Big remains open along strike and at depth.

The maiden resource estimate is complemented by excellent metallurgical characteristics for the deposit’s ores, which show a 99.5% recovery for the supergene gold mineralisation from conventional gravity concentration and leaching techniques.

Gold recovery was 95.2% for the transitional ores and 80.4% for the fresh ores, which makes the processed ore stream amenable to conventional technologies and hence, ideal for potential toll treating options in the immediate area near Kalgoorlie.

Anglo Australian Chairman John Jones said: “I am delighted to … announce this maiden resource at Think Big which, together with positive metallurgical results, has significantly advanced the company towards its goal of a profitable mining operation at Feysville.”

“… the Ethereal Shear Zone was discovered by Anglo Australian (in) late 2016, with previous owners of the ground position failing to identify this important geological feature, and with first RC drilling not undertaken until mid-2017, I am more than satisfied with the company’s efforts.”

“I am highly confident that further infill and extensional drilling will only add to the resource. With mining and infrastructure studies already underway into the monetisation of Think Big and, specifically, the supergene enriched gold zone, I am also highly confident there will be further good news to follow.”

The company is focussed on determining the feasibility of mining operations at Think Big and recently initiated a detailed infill drilling program over the supergene-enriched gold zone to facilitate open pit optimisation studies.

Elsewhere at Feysville, the company will complete infill and extension drilling at the Saintly prospect and test for extensions to the recently identified near-surface gold mineralisation at the Hyperno prospect.

Anglo also recently kicked off drilling at its Mandilla project, 20km southwest of Kambalda in WA, where it is testing for bedrock gold mineralisation.

Last year, the company defined a supergene oxide gold zone over more than 2.5km of strike and up to 250m width via shallow aircore drilling at Mandilla.

Gold mineralisation at Mandilla is related to extensional quartz vein arrays that have visible gold and potentially shear-hosted lodes in a nearby granite.

At Mandilla East, Anglo has already identified an inferred, JORC-compliant gold resource of approximately 360,000 tonnes at 3.3 g/t Au containing about 38,000 ounces of gold.

The company is busy at present with significant drilling underway at its projects in the Goldfields and Kimberley regions of WA.

Cash flow could very well be achieved in the short term if Anglo can quickly prove-up an ore reserve at Think Big as there are a plethora of hungry gold plants in the Kalgoorlie region ready to gobble up its ores.