Anglo Australian Resources has commenced RC drilling at its Koongie Park project near Halls Creek, WA, with holes targeting the Bulldog and Nicolsons East prospects where quartz vein outcrops have recorded high-grade gold values. The project has geology that is similar to Pantoro Limited’s neighbouring Nicolsons Gold Project, which currently produces about 55,000 ounces of gold per annum. 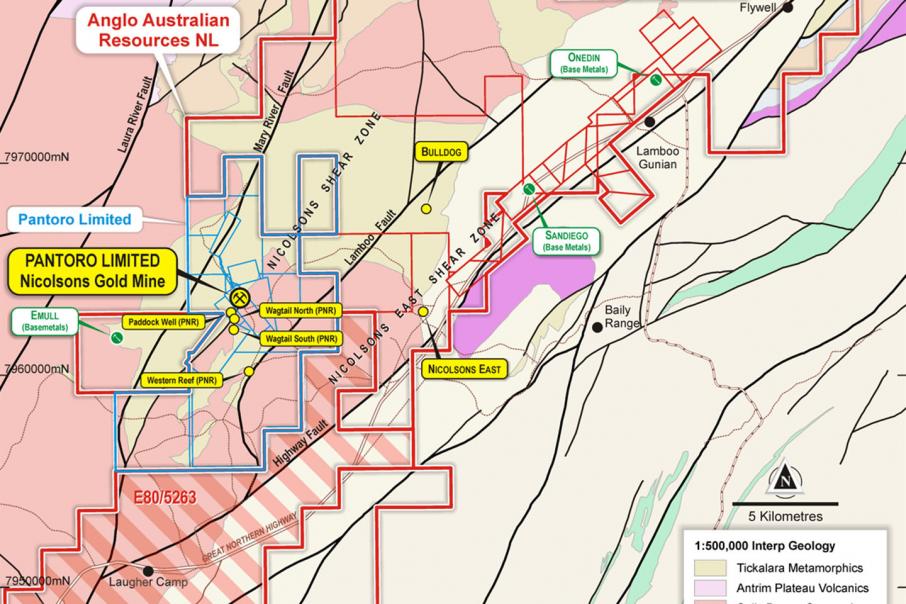 With the Kimberley wet season drawing to a close, Anglo Australian Resources has laced up its work boots and started a highly anticipated drilling campaign at its Koongie Park gold project near Halls Creek.

The 15-hole 1000m RC drilling campaign seeks to uncover the potential scale and grade of the Bulldog and Nicolsons East prospects where rock chip samples have already returned assay results of up to 73.58 grams per tonne gold and 15.7g/t gold respectively.

Anglo holds nearly 550 square kilometres of exploration holdings at the Koongie gold project, where the historical focus has been on base metals exploration rather than gold.

The geological province surrounding this part of the Kimberley district has many similarities with nearby Granites-Tanami province in the Northern Territory, which is strongly mineralised with gold, including Newmont’s world-class Callie deposit and surrounding mines that hold over 20 million ounces.

Despite this gold potential, just six drill holes have been completed at the Bulldog prospect to date.

Anglo’s maiden drilling campaign at Koongie Park is just the latest addition to the company’s active campaigns that are currently being carried out across a swathe of different projects in Western Australia.

These include a major drilling campaign to fast track development of the Feysville gold project near Kalgoorlie and a 52-hole infill program targeting a supergene oxide gold zone at the Mandilla project, 20km southwest of Kambalda.

Despite this, any discovery at Koongie Park will also warrant further activity given its proximity to the 55,000 ounce per annum Nicolsons gold mining operation.