Anglo Australian’s Kalgoorlie gold play is hurtling headlong towards a maiden resource after multiple successful passes with the drill rig produced gold intersections going up to 6 ounces to the tonne just 14km from the super pit. The project is located on the Norseman-Wiluna Belt which plays host to a number of major deposits including the 3moz New Celebration and 15m ounce St Ives gold mines. 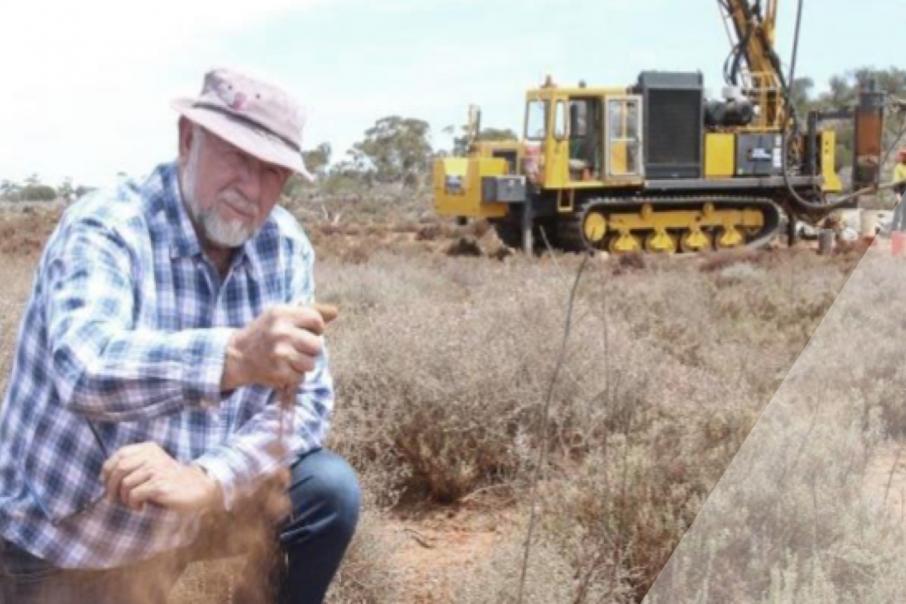 Out of office; Anglo Australian Resources' Chairman John Jones at the Feysville Gold Project near Kalgoorlie

Successful mining entrepreneur, former Kalgoorlie identity and occasional raconteur, John Jones, has been quietly toiling away with a drill rig or two just 14km south of Kalgoorlie’s multi-million ounce super pit and his results give cause for pause.

The wily Jones, who heads up ASX listed Anglo Australian Resources has been racking and stacking a solid slew of drill results at Anglo's gold play just 5km east of Kambalda Road between Kalgoorlie and Kambalda and it would appear that the market Meerkats have now spotted it, with Anglo’s stock doubling in the last 12 months.

Anglo appears to be spoilt for choice at its Feysville Gold Project with multiple, multi-zone target prospects revealing themselves, however the company is quickly narrowing in on two that look to be really quite interesting, the Think Big and Saintly prospects, both names that will be familiar to Melbourne Cup punters.

With excitement building, Anglo hit it again in February this year producing a serious looking 54m intersection at 1.75 g/t gold, again from very near surface at just 28m down hole.

Now well blooded and up for the chase, Jones and his geological cohorts drove another sublimely placed hole into Think Big in April that produced a set of best yet results.

Interestingly, just as the company paused to think about wrapping a resource around Think Big, the brand new Saintly prospect jumped from the shadows about 800m to the north with a headline intersection of 21m at 2.47grams per tonne gold from just 20 metres deep.

Follow up drilling last month produced another lovely set of numbers at Saintly, including a very exciting 4 metre intersection at a whopping 49.67grams per tonne gold from 68 metres down hole.

And as a final wink to the onlookers, this included a 1m intersection boasting over 6 ounces to the tonne gold.

Yesterday Anglo turned out another solid set of numbers at Saintly and it now looks like the company is well and truly off and running with this exciting prospect.

Encouragingly, the latest drill hole is just 20m to the South West of the original 21m, 2.47 gram per tonne Saintly discovery intersection on the same drill line.

If nearology is important, Anglo has it in spades given its location on one of Australia’s premier gold belts that takes in the 70m ounce Golden Mile deposit just 14km to the north.

Just 10km to the south is the historic, 3m ounce, New Celebration gold mine and about 60km’s further south is the 15m ounce St Ives gold system.

Each of these gold deposits is centred on the Boulder Lefroy fault, which passes along the western side of Anglo Australian's Feysville Project for some 10 kms.

Suitably encouraged by the almost can’t miss nature of his recent drill campaigns, Jones now has his cap on backwards and is feverishly swiss cheesing the Feysville project with both an R.C and and an air core rig about to start working over time.

In a market update yesterday he said; “Pleasingly, essentially all the strike length so far tested carries anomalous gold, commencing at shallow depth, and with many areas being of significant width, grade or both.”

“We are excited to soon be commencing our evaluation along the Ethereal Shear Zone to the south of Think Big, an area which appears geologically favourable for further discovery.”

With an annual cash salary of just $90,000 last year, Jones doesn’t look to be in it for the money either – or at least not yet.

His motivation is probably best explained by his top of register Anglo shareholding in the 8c a share company.