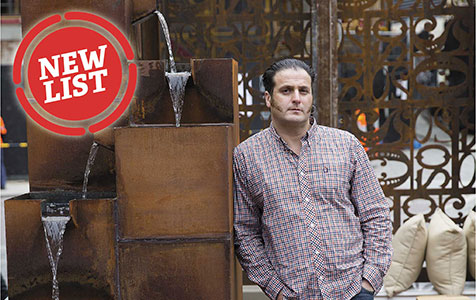 LAST STAND: Gary Beadle has vowed Lot 20 will be his last small bar in WA after a two-year battle for a liquor licence. Photo: Attila Csaszar

Opening a small bar in Western Australia is now more complicated, expensive and time consuming than ever, prompting some operators to question the viability of the business model, given the high barrier to entry.

The increasingly arduous process of obtaining a liquor licence has exasperated one of Perth’s best-known bar owners so much he told Business News the level of red tape had “broken him” and he would never again open a hospitality venue in Perth.

Lot 20 comes after Mr Beadle’s involvement with Highgate’s Luxe Bar and his co-founding of both 399 Bar in Northbridge and Five Bar in Mount Lawley.

It was Mr Beadle’s reputation as a successful small bar operator that prompted the Metropolitan Redevelopment Authority to approach him with an offer to develop the Lot 20 site into a small bar.

Despite the initial enthusiasm from the MRA, however, Mr Beadle said the process of obtaining development approval from both the authority and the City of Perth, and then a liquor licence from the Department of Racing Gaming and Liquor, wasn’t worth the effort.

“They’ve beaten me this time, I’m not going to do it anymore,” Mr Beadle told Business News.

“I think I’m really good at what I do; we’ve done some great venues and they’ve all been progressive venues and added a lot to the industry … but they’ve beaten it out of me.”

Other operators, who have already had success with small bars in Perth, have made similar comments.

One, who did not want to be named, said the challenges standing in the way of would-be operators were making it nearly impossible to get a business off the ground.

“If you look at Melbourne or other markets where they’ve got a vibrant small bar scene, you’ve got a lot of young operators. If you’ve got talent, creativity and drive, you can start a business in those markets,” the business owner said.

“If you work hard enough and do all the right things you can succeed, but if you don’t you won’t; but it’s not up to someone else to determine that [over there].

“Whereas if you’re a talented, passionate and creative young operator and you want to start up in WA … how do you begin?” It was two years after Mr Beadle lodged his expression of interest with the MRA until his liquor licence application received approval from the Department of Racing Gaming and Liquor, with the final stage in the process taking 10 months.

Research undertaken by Business News shows the time it took for Mr Beadle’s liquor licence to be approved was the second longest since the introduction of the small bar class of licence in 2007.

Only the operators of Jacs in Applecross had to endure a longer wait – it took 13 months for their application to be approved (see page 14).

When looking at the more complicated decisions over that timeframe – typically those that received police intervention – it’s clear the average wait for approval has been increasing steadily.

When the small bar class of liquor licence was first introduced, it took an average of three months for the first wave of applications to be processed. That timeframe has now doubled to an average of six months.

Many in the sector have highlighted the increasing intervention from police commissioner Karl O'Callaghan as a major contributor to the longer wait for an approval.

The police are notified whenever an application for a liquor licence is lodged with the Department of Racing Gaming and Liquor.

That then gives the police commissioner an opportunity to intervene in an application, which is intended to give the director of liquor licensing additional information to take into account when making a decision.

During the past 12 months nearly all of the applications have received such interventions.

That’s despite the police commissioner disputing the widely held belief that he had a policy to intervene on every application.

“All licence applications are reviewed and, where appropriate, an intervention is lodged,” a police spokesperson said.

Mr Beadle placed much of the blame for the delays associated with his application at the feet of the police commissioner.

“The only people to object to our application was the police and they don’t object with any intelligence,” Mr Beadle said.

“What they do is they get their standard form out, print it off, send it in and it’s exactly the same as others.

“They should be coming in and supporting this stuff because [small bars] make their job easier by lowering the crime.”

Ms Patterson told Business News there was no doubt the process had become increasingly complicated.

“The process has become, in my experience, more bureaucratic in that it’s paper driven,” she said.

“All that material then needs to be read, considered and checked off and the formal paper needs to be scanned into the licensing authority’s system, so all of this has created quite a bureaucratic system.”

“I have heard police publicly say that their policy is to intervene on everything … I think that doesn’t necessarily address the issues under the legislation if there’s a blanket policy of intervening,” she said.

That tailored examination was something federal member for Perth Alannah MacTiernan said was lacking from the police intervention lodged for the Swallow bar in Maylands, of which Ms MacTiernan is a landlord.

“To some extent they’ve undermined their own credibility by not being sophisticated enough in their arguments,” she said.

“In the case of Swallow, I didn’t feel that the police were prosecuting their case with a sufficient sophistication for them to be taken seriously.”

“They will say things like ‘we’ve got an alcohol problem in society’ but they’re not analysing or thinking about the fact that maybe if we moved more towards small bars that we might have less of a problem.”

Rob Bates-Smith, who owns and operates The Wine Store in East Fremantle, received a police intervention against his application for that venue as well as a second small bar licence for his planned Claremont venue to be called Asado.

The licence for the latter was approved in July after a seven-month negotiation process with the Department of Racing Gaming and Liquor, and the police commissioner.

“I understand the challenges and liquor enforcement can’t be an easy task,” Mr Bates-Smith said.

“So while I respect where the liquor enforcement unit are coming from, a broad-brush approach to all licences isn’t the solution. BACK FOR MORE: Rob Bates-Smith is planning to open his second small bar, in Claremont, next year. Photo: Attila Csaszar

“All the papers have to be presented almost as if the business is already operating; they have to have that level of detail of the business proposed and an applicant has to secure the right to the premises and obtain development approval,” she said.

Ms Patterson said that was a costly task, especially if applicants had to pay rent, and often resulted in would-be operators running out of money before the licence was approved.

“Twenty-somethings who have saved a bit of money get attracted to the idea that this is accessible to them and that finally there is a little business in which they can start small … because that’s the whole idea,” she said.

“But many of those people come a cropper along the way.”

Mr Bates-Smith said the only way he was able to get his businesses started was due to the support of business partner and landlord, FJM Property.

“With Asado we’ve been incredibly fortunate to have a supportive business partner (and landlord) that has been willing to persevere for more than a year and a half,” he said.

“Unless you’re working with a proactive local council, as well as a supportive landlord, the barrier to entry for a small bar in WA is extremely high.”

There is also a significant disparity between local governments in their processing of development applications for small bar venues; some are reported to have taken more than a year while others, like the City of Fremantle, have taken as little as two days.

Fremantle Mayor Brad Pettitt said the council had amended its planning policy to accommodate small bar development in Fremantle, but local operators were increasingly frustrated with the approval process at state level.

“The main concern from operators is that there is still too much expense and red tape at a state level that threatens to make many venues difficult to establish due to long waits for approvals and high costs of getting a licence,” he said.

“This is especially true when liquor consultants and lawyers need to get involved.”

The Department of Racing Gaming and Liquor said each application had to be determined with due diligence and efforts to streamline the process could not undermine the integrity of the application procedure.

“Furthermore, all applications are determined as quickly as departmental resources allow,” a department spokesperson said.

“To put this into perspective, it should be noted that during the 2013-14 financial year, the department issued more than 16,700 licences, transfers, permits, orders, notices and certificates.”

An independent review of WA’s liquor laws resulted in a slew of recommendations, including several focused on improving the application process.

Those recommendations suggested increasing the Department of Racing, Gaming and Liquor’s resources so it may be better able to respond to applications and establish an online process.

However, nine months after the review there has been no comment made by Racing and Gaming Minister Terry Waldron about what he intends to do with those recommendations.

“I understand there are concerns about [the timeframes] within the industry, and they are certainly being considered – alongside a range of other views – while I am working on the government’s response to the review,” Mr Waldron said.

“This is progressing well, and I hope to have a response to take to cabinet in the near future.”

Ms Patterson said it wasn’t surprising there hadn’t been any progress, and was sceptical about any future reforms resulting in the reduction of red tape.

“My gut feeling is that we could potentially see more regulation before less,” she said.

“The statistics that the police produce of alcohol harm in the community are quite startling so I think that [could prompt] more regulation before less.

“The government has a lot of issues on its agenda and liquor reform doesn’t appear to be a priority.”