Andaluz a labour of love

Cross-cultural and historical influences are apparent at a new tapas bar in the CBD. 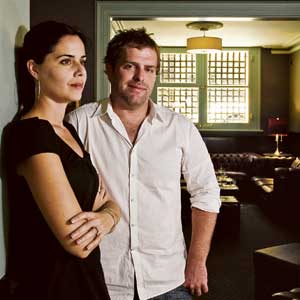 THE venue's name and menu may be borrowed from Spain's populous south, but Andaluz Tapas Bar has the look and feel of a private club setting, complete with Chesterfields and subdued interior lighting. And there's not a prancing white horse to be seen.

Set to open shortly, the venue on Howard Street in Perth's central business district is one of the first in the area to take advantage of the small bar licences created by the former state government.

About a year in the making, it is clear that the bar is a labour of love for partners Ryan Gregory and Carla Arevalo. The bar is in the basement of the heritage-registered Parker & Parker building at 21 Howard Street, a 104-year-old structure owned through a family connection of the bar's developers.

Extensive renovations have opened up the basement area while retaining much of the original feel and some touches of the early 20th century construction, such as a safe door complete with nameplate. The walk-in safe, though, is gone, expanded to a small nook for those requiring a very private corner.

It is Ms Arevalo's Andalusian heritage that has influenced the theme that subtly extends throughout the bar, which is licensed to serve 120 patrons.

However, it is also clear that the building's heritage has lent itself to what the partners are attempting with the creation of their first business.

Mr Gregory has a hospitality and lifestyle media background, while Ms Arevalo is a former high school teacher.

Further underlining the growing influence of Melbourne's 1990s deregulation renaissance, Ms Arevalo said the look and feel of the bar sought to reflect ideas they'd picked from the Victorian capital, rather than the more sterile look favoured in Sydney.

"We did a trip to Melbourne and visited 10 different bars that we wanted to see," she says.

Former chef at tapas bar Just, Brenton Pyke, has joined the small team at Andaluz and plans a menu that will be affordable and, potentially, achievable in one evening.

The idea, Mr Pyke says, is to offer small pickings for people seated casually, rather than confronting them with a big plate of fodder. In any event, Andaluz is not set up to cater for the latter, with small and low tables playing a clear support role to the bar's seating arrangements.

At the Howard Street entry there is a small laneway courtyard that will offer a very comfortable outdoor meeting place for Perth's less climatically extreme evenings. There is also a back door to the real Howard Lane opening adjacent to another bar likely to open in the future at the back of the renovated WA Club.

Mr Gregory likes the idea of people moving through the different venues and creating after-hours life in the area.

The pair looked at sites in Mount Lawley and Subiaco but felt the existing venues were too established, whereas the Howard Street area was very much underserviced - with really only the small front bar at Balthazar or the large scale of Emporio on offer to lawyers and bankers seeking to slake a thirst.

"That is a dead pocket, there is not a lot going on," Mr Gregory says of the area chosen for the bar.

He can see the irony of starting a bar in the CBD amid an economic downturn.

"For us, as a small bar with a maximum of 120 people, there are still people who have to have lunch and dinner or a glass of wine," Mr Gregory says.

"I am not overly fazed by the current market."