Alkane Boda discovery prompts Impact to look in own backyard 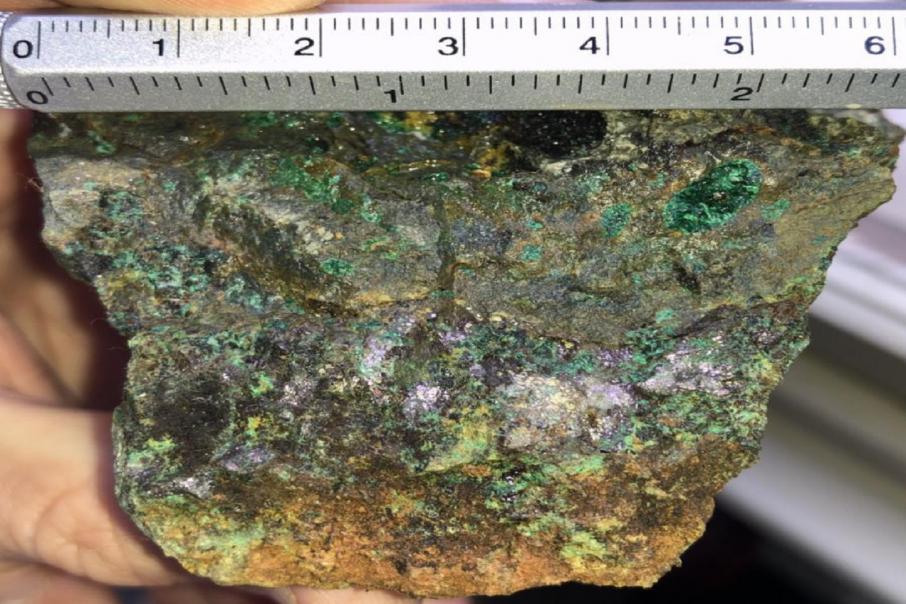 Sample of volcanic rock from the Apsley prospect at Impact’s Commonwealth project. Bornite (purple) and chalcopyrite (yellow) are two copper sulphide minerals in the sample. Copper oxides and carbonates (green) are also present. Assays are pending.

Apsley is just one of a smorgasbord of targets that Impact has been working up at its Commonwealth copper-gold project in NSW.

The Commonwealth project sits comfortably in the centre of the prolific Lachlan Fold Belt in NSW.

Assays are still pending but according to the company, the visible host rocks in the sample look to be the goods.

With just over 1,000 ounces of gold per vertical metre inferred in the resource from surface, an Exploration Target has also been tabled at Commonwealth that sits at around 2.85 million tonnes going an average of 7.5g/t gold.

The company’s historical data shows that previous explorers had not walked too far afield from the known mineralisation at Commonwealth, which still leaves large open areas that are ripe for discoveries and potential resource extensions.

The Commonwealth project looks to have striking similarities with the world-class Eskay Creek project in Canada, management said, which is experiencing a massive gold-rush revival.

Interestingly, Impact says that the Boda-Kaiser intrusive complex extends at least 500m into its ground holdings at the Boda South prospect, presenting as an almost irresistible target.

Impact has been working diligently on improving its geological models to advance exploration since acquiring the Commonwealth project in 2013 under a merger implementation agreement with Invictus Gold.

Under the terms of the agreement, Impact acquired all the shares in Invictus in a five-for-four exchange, a deal that probably looks ok today given the Commonwealth project’s rapidly advancing prospectivity.

The company also recently created a trial mining plan at its Blackridge project, located 25km north of Clermont in QLD, which is a conglomerate-hosted gold play.

According to Impact, under the trial, the mining contractor will “free-dig” approximately 1.6 million tonnes of mineralised material across an area of about 300m by 300m in length and 10m deep.

The gold nuggets from this material have demonstrated exceptional gravity recoveries of greater than 98%, according to the company.

Historical grades in the basal conglomerate units at Blackridge ranged from between 10g/t gold and 20g/t gold, with bonanza grades of up to 10 ounces of gold per tonne in places.

Impact acquired a granted mining lease at Blackridge for $37,000 in 2018 that covers the main gold-bearing lodes over about 400m in length.

The bulk of Blackridge was acquired through an option agreement to purchase 95% of four mining lease applications and one exploration permit for $200,000.

Next on Impact’s portfolio of assets is the Clermont project, located adjacent to some big mines in the Charters Towers region of northern QLD.

Impact recently completed a drill program at Cleremont with the first diamond hole delivering a result of 0.7m at 10.9g/t gold, 146g/t silver, 8.3% zinc and 5.1% lead.

Drilling has identified a two-kilometre long gold-silver-base metal mineralised zone, which, according to the company, has demonstrated the discovery potential at the project and it is now planning to conduct further drilling.

At the Red Hill prospect, Impact discovered the highest reported grades of PGMs in Australia with 3.5m grading at 2.9% nickel, 2.3% copper and a mammoth 159g/t 6PGMs plus gold.

The company’s latest rock chip samples from the surface came back with results ranging between 1g/t PGM and 36g/t PGM and have confirmed that high-grades are most likely not a fluke.

Impact clearly has a lot of chips on the table right now and it shouldn’t take much for at least one of its numbers to come in – this could get interesting.