Ongoing DFS works at Adriatic Metals’ Rupice and Veovaca deposits in Bosnia are accelerating and the company says results are anticipated for the third quarter this year. This week, the multi-metals developer tweaked its Rupice underground mine plan to squeeze out 26 per cent more silver in the first two years by attacking the high-grade core earlier in the plan. 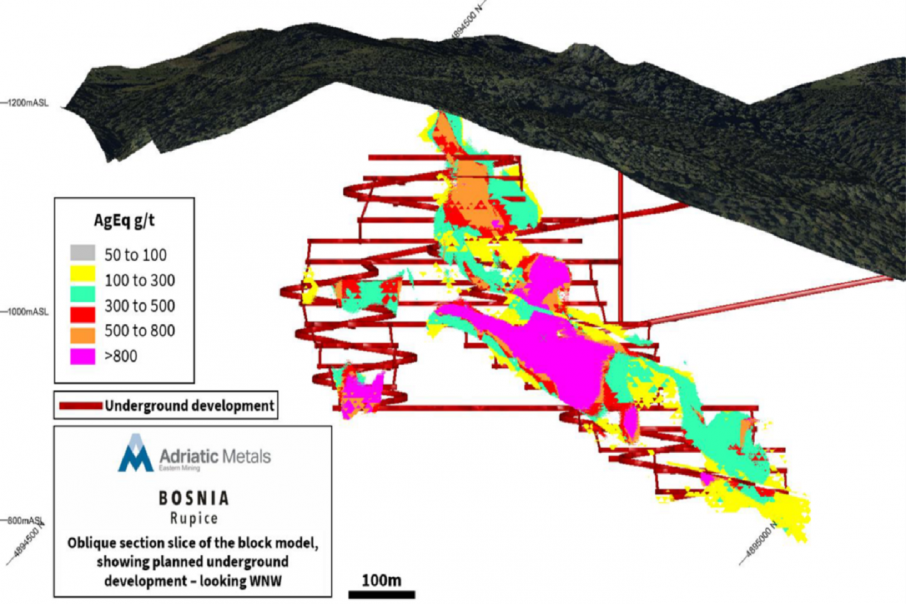 Ongoing DFS works at Adriatic Metals’ Rupice and Veovaca deposits in Bosnia are accelerating and the company says results are anticipated for the third quarter this year. This week, the multi-metals developer tweaked its Rupice underground mine plan to project an uplift of 26 per cent more silver in the first two years by attacking the high-grade core earlier in the mine plan.

The PFS shows some robust looking numbers for the project, with a post-tax net present value of just over a billion US dollars at an 8 per cent discount rate reported for the initial 14-year operation.

It shows a capital payback period of just 1.2 years. The average annual EBITDA prediction comes in at US$251 million for the first five years of operations and capital costs are estimated to come in at around US$273 million.

In mine optimisation works, consultant, Mining Plus has increased the silver-equivalent metal contained within the Rupice mine design by 26 per cent for the first two years of the planned mining operation. A new portal location and decline will target higher-grade mineralised zones for the fixed 2,200 tonne-per-day planned mining rate, whilst geotechnical drilling for the location of the new portal and decline has begun.

At Veovaca, demolition works of the historical processing plant commenced late last year and are now nearing completion. The original concrete pads will remain for the new processing plant to be constructed on, whilst a geotechnical drilling program to test the structural integrity of the concrete pads has now been completed.

The Environmental and Social Impact assessment for the mining operations is moving into the final stages of baseline data collection and monitoring, with completion anticipated for May. Work has also commenced on various management and mine closure plans which will allow for Adriatic to implement mitigation measures during project construction, operation and ultimately closure of the mine.

Permitting works are advancing with Adriatic currently in the process of completing the acquisition of land parcels in the vicinity of Rupice. The company has also lodged an application to convert the land from being classified for forestry and agricultural use into an industrial use classification. Adriatic expects the Urban Planning Permit for Rupice and the Exploitation Permit to be issued later in the current quarter.

Logistics works are accelerating also with Adriatic now in advanced discussions with the state-owned railway company as it looks to recommission 17km of rail line and obtain locomotives and rolling stock.

15km of haulage road is also anticipated to be constructed with the route now finalised and surveying commenced. Meanwhile, the location for a water storage pond has been adjusted to be closer to the processing plant and a secondary water source has also been secured from pre-existing pipelines.

The company has also appointed leading commodity trading house Bluequest Resources to manage the marketing and offtake of the concentrates from Vares, with offtake term sheets expected by Adriatic in the current quarter. A separate marketing study for the offtake of the barite by-product at the project has also been initiated.

Funding endeavours are also ongoing and the company has now received several non-binding term sheets from banks and alternative sources for the financing of Vares. The company has appointed RBC Capital Markets as joint corporate broker.

Adriatic has come a long way since listing on the ASX in 2018 and as the DFS works for Vares continue to accelerate the company is showing no signs of stopping to take a breath.