Adriatic Metals is set to increase its land holdings at the exciting Vares project in Bosnia, after receiving a key permit for major expansions to its existing concession agreement over the Rupice and Veovaca prospect areas at its 100% owned base metals play. At Rupice North, the expansion takes in the region northwards and down plunge of a 66m thick, high grade intersection reported in October 2018. 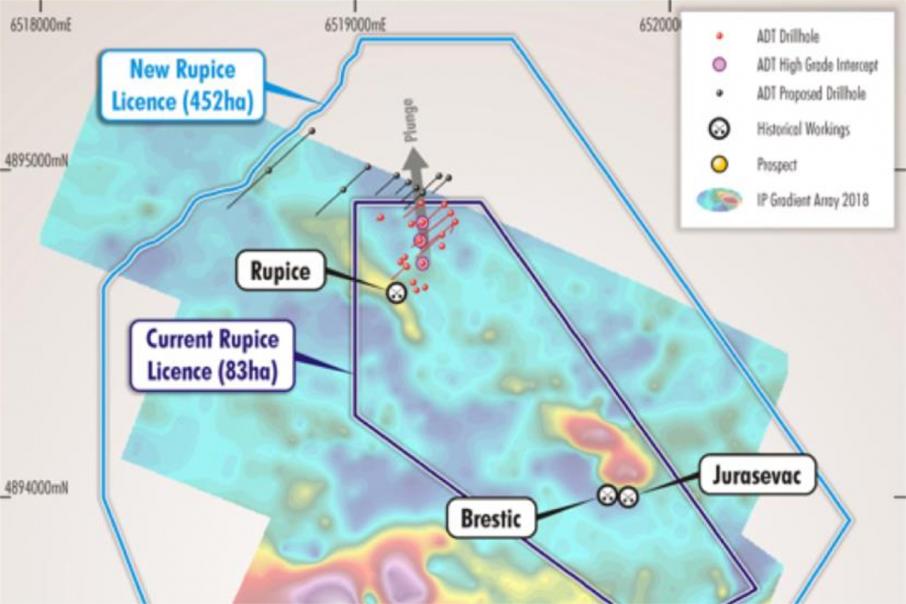 ASX listed Adriatic Metals is set to significantly expand its land position in central Bosnia, this week receiving an urban planning permit from the local authorities to broaden the existing concessions at the company’s exciting Vares project.

The permitting reflects the strong Government and commercial support for the company’s ongoing exploration and development activities in the country, where it is on the verge of completing a maiden JORC compliant mineral resource estimate for the high-grade Rupice prospect.

The issue of the planning permit is now the last step required for obtaining the Exploration Permit by application to the Federal regulators, thereby extending the existing Rupice and Veovaca concessions.

The new approvals increase the land holdings at Rupice more than 5-fold and includes a 500m region north and down-plunge of a 66 metre intersection of high-grade mineralisation that returned an amazing grade of 9.5% zinc, 4.9% lead, 2.4g/t gold, 187g/t silver, 0.5% copper and 56% barite from 204m down-hole in October last year.

According to the company, this area is a high priority for further exploratory drilling and preparations for access are well underway.

The land expansion at Rupice provides all the necessary access for drilling at the Brestic-Jurasevac prospect just over 1km to the southeast, which contains historical workings but no modern exploration activity.

The expanded concession at Rupice also takes a prospective looking corridor, centred about 1.5km to the south southwest, which contains numerous undeveloped prospects with underlying conductive geophysical anomalies, which may represent base metal sulphide mineral occurrences.

Most of these prospects have had no definitive exploration since the 1960s.

11.5km southeast of Rupice, Adriatic has also broadened its land position over the Veovaca prospect, where it has already defined a JORC-compliant mineral resource of 4.44 million tonnes grading 1.96% zinc, 1.11% lead, 58g/t silver, 0.09g/t gold and 20% barite.

The expansion at Veovaca will allow the company to commence modern exploration and drilling campaigns over the significant base metal prospects of Orti, Seleste and Mekuse, where historical work yielded positive results from geophysics, surface trenching and limited drilling.

It was a stellar 2018 for a cashed-up Adriatic, whose market cap was sitting at just under $120m this week, after only listing on the ASX in late April of last year.

Adriatic CEO Geraint Harris said: “I am very pleased that this key exploration permitting step has been achieved through close cooperation between Adriatic’s BiH team and the significant number of governmental and commercial stakeholders involved in the process.”

“This once again proves that Bosnia & Herzegovina is open for business and very willing to work with companies like Adriatic who wish to explore for minerals in a responsible manner”.

“Our drilling crews have been persevering through recent heavy snowfall and this decision paves the way for our Exploration Permit and then drilling on our highly prospective new Concession areas.”

The company believes there is significant potential to extend existing areas of identified base metal and precious metal mineralisation into new discoveries on its expanded tenement position at both the Rupice and Veovaca prospect concessions in Bosnia.