Adriatic Metals will increase its land holdings at the exciting Vares project in Bosnia after local municipal authorities approved the company’s request for major expansions to its existing concession agreement over the Veovaca and Rupice prospects at its 100% owned Vares base metals play. At the Rupice project, the expansion includes land immediately north of a 66m wide, high grade intersection of gold, silver and base metals reported by Adriatic in July. 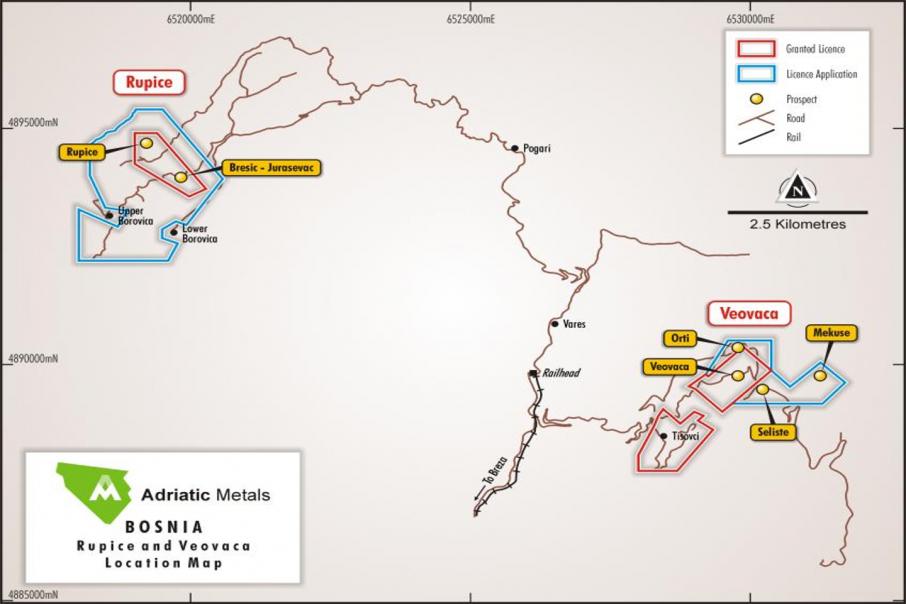 Adriatic Metals knows it is onto something in Bosnia and has wasted no time locking up more ground within cooee of its exciting Vares multi-mineral project which takes in the Veovaca and Rupice prospects.

The company said this week that the local municipal council had approved the company’s request for major land expansions to its existing concession agreement over the 100% owned Vares polly-metallic project.

Under the terms of the original agreement, Adriatic obtained ownership of three fields, with two of these surrounding the Veovaca prospect and the other encapsulating the Rupice prospect.

Following a string of extraordinary successes with the drill bit that commenced in 2017, the company has been able to couple historical data and more recent geophysical and geochemical results to justify applying for an extension to the agreement.

Adriatic believes there is significant potential to extend existing areas of identified mineralisation into new discoveries on its expanded tenement position.

The high grade mineralisation in this hole continues down plunge to the north, directly into the expanded concession area, representing an irresistible target for the company to follow-up.

Adriatic Metals CEO Geraint Harris said: “The approval of the Concession extension by the Vares Municipality was based on a full council meeting and ensuing discussion, which resulted in a unanimous supporting vote. This marks a very significant demonstration of the local support that the company is fortunate to enjoy in the Municipality of Vares.”

“The expanded Concession application will allow us to employ modern exploration techniques to a hugely prospective area and further help maximise the value of the Vares Project over both the short and medium term.”

The application will now be subject to a brief public review period and if successful, it will be submitted to the local Government Ministry for final approval and gazette.