Adriatic Metals has intersected very encouraging, thick intersections of base and precious metals mineralisation from drilling in its new Concession area at the northern end of the exciting Rupice prospect in Bosnia. The new results include 30m @ 9.7% zinc, 5.2% lead, 265g/t silver, 4.6g/t gold, 0.4% copper and 43% barite from 246m down-hole that will be incorporated into a mineral resource estimate for Rupice later this year. 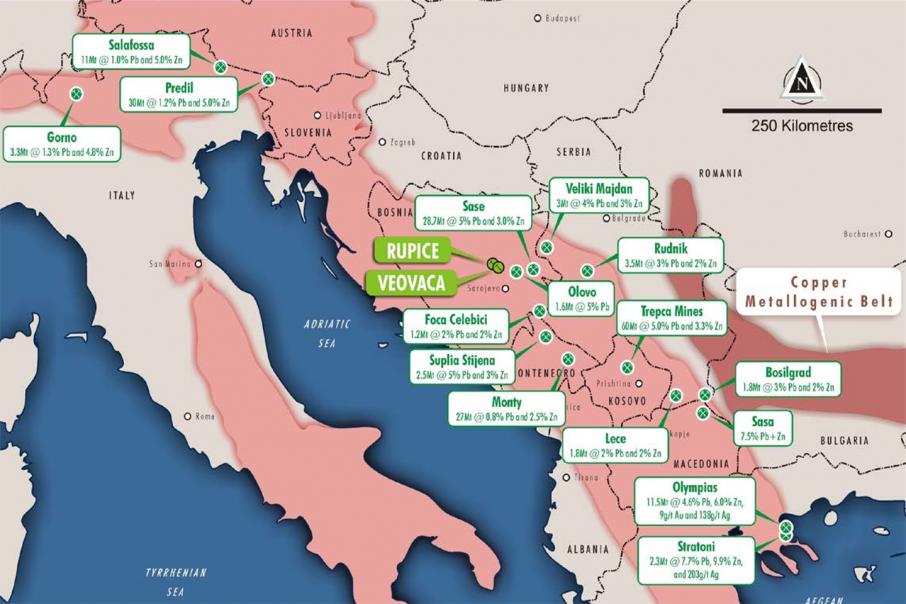 ASX listed and Bosnia focussed base metals developer Adriatic Metals has continued its march at the exciting Rupice prospect, with the first two drill holes completed in the northern extension to its existing Concession coming up trumps.

Whilst not entirely unexpected, the company will feel that its process of extending the Concession areas around the Rupice prospect has now paid off in spades.

The company stated that drilling at Rupice continues both at the northern and southern sections of the prospect area and also has one rig targeting the Veovaca deposit further to the southeast.

Results from the latter program will be included in a mineral resource update for Veovaca, including its precious metals content, which currently stands at 4.44 million tonnes grading 1.96% zinc, 1.11% lead, 58g/t silver, 0.1g/t gold and 20% barite.

“The drilling has extended mineralisation some 45m from … our most northern hole of the 2018 drill campaign and drilling continues in the northern plunge zone some 65m into the new Concession area.”

“At Rupice South our drilling continues to return high-grade intersections that extend … a further 45m into areas previously untested. The focus of our drilling this year has been to complete holes up-dip and down-dip on each northerly step-out, to provide a more robust contextual understanding of the deposit.”

“At Rupice we will continue drilling both north and south before declaring a maiden resource estimate whilst metallurgical, geotechnical and hydrogeological studies currently underway will feed into a Scoping Study and ultimately a Feasibility Study.”

“Our geophysical survey is also underway, and will assist in the identification of more specific drill targets at Jurasevic-Brestic and Borovica.”

The company’s Vareš project in central Bosnia comprises a historical open cut zinc-lead-barite and silver mine at Veovaca and the flagship Rupice prospect, which continues to exhibit exceptionally high grades of base and precious metals, ahead of its initial mineral resource estimate later this year.