Bosnian regulatory authorities have accepted Adriatic Metals’ “geological reserves” statement for its Rupice-Juraševac-Brestic project and provided a clearer path to the issue of Exploitation and Operating Permits for developing that deposit. The company continues drilling on four rigs to extend the high-grade mineralisation at the Rupice prospect and test priority targets outlined by technical data that show potential for discoveries. 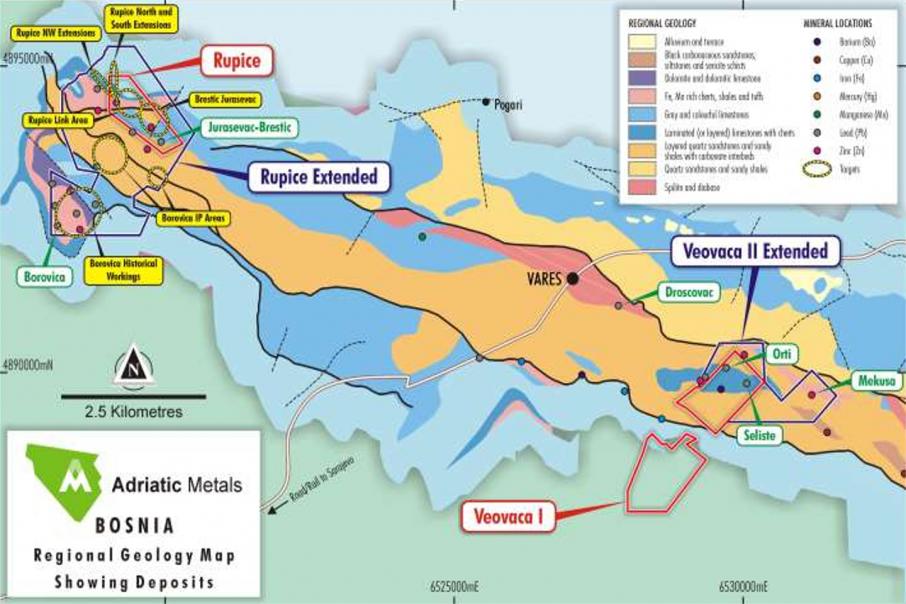 Adriatic Metals’ exciting Rupice prospect in Bosnia just made a major leap forward, with regulatory authorities accepting the company’s “geological reserves” statement for the Rupice-Juraševac-Brestic project and hence, paving the way for the issue of Exploitation and future Operating Permits to develop the deposit.

Under Bosnian law, once economic quantities of any metal are defined by a company, it must apply to add those to the existing Concession Agreement, by way of “Concession Annexe”.

Adriatic submitted an application for the Rupice-Juraševac-Brestic project late last year, which has now been accepted by the relevant Bosnian Government department in-country.

According to the company, this is a major milestone, because any further additions to the Concession Agreement via Annexe, are automatically applied to all other exploration fields already owned by Adriatic.

This would include not only the Rupice-Juraševac-Brestic project but also the Veovaca I & II project areas, that already hold a JORC-compliant mineral resource of 4.44 million tonnes grading 1.96% zinc, 1.11% lead, 58g/t silver, 0.09g/t gold and 20% barite.

Application for an Exploitation Permit for Veovaca is already at an advanced stage and is expected to be submitted to authorities next quarter.

The emerging Rupice deposit is contained within the same Concession Agreement as Veovaca I & II and so will also benefit from the extended tenure that any Exploitation Permit granted on Veovaca will provide out to May of 2038.

For the Rupice Exploitation Permit application, Adriatic will be required to submit a full supporting Environmental Impact Study document, that will include an in-principle Site Plan, Mining Plan, Land Access Agreements and an Urban Planning Permit.

The company said that this work has commenced and will be finalised following the completion of exploration and resource development programs at the broader Rupice-Juraševac-Brestic project.

Adriatic CEO Geraint Harris said: “The acceptance of the Reserve Elaborate for Rupice is another major milestone in the permitting of the Vareš Project. While exploration at Rupice is focussed on continued growth of the resource base, this step allows us to align the permitting time-lines for all fields.”

“We are privileged to have a highly-accomplished management and technical team in Bosnia & Herzegovina, who also enjoy close collaboration with and have the continued support of government at all levels in Bosnia.”

The company added that drilling continues on four drilling rigs to extend the high-grade base and precious metal mineralisation defined at Rupice and to test priority exploration targets delineated by historical and recent data collection that show potential for discoveries.

Adriatic’s market cap is just shy of $150m, with shares closing at an all-time high of 96c this week, off the back of the company’s extraordinary run of drill success in Bosnia since listing about a year ago.