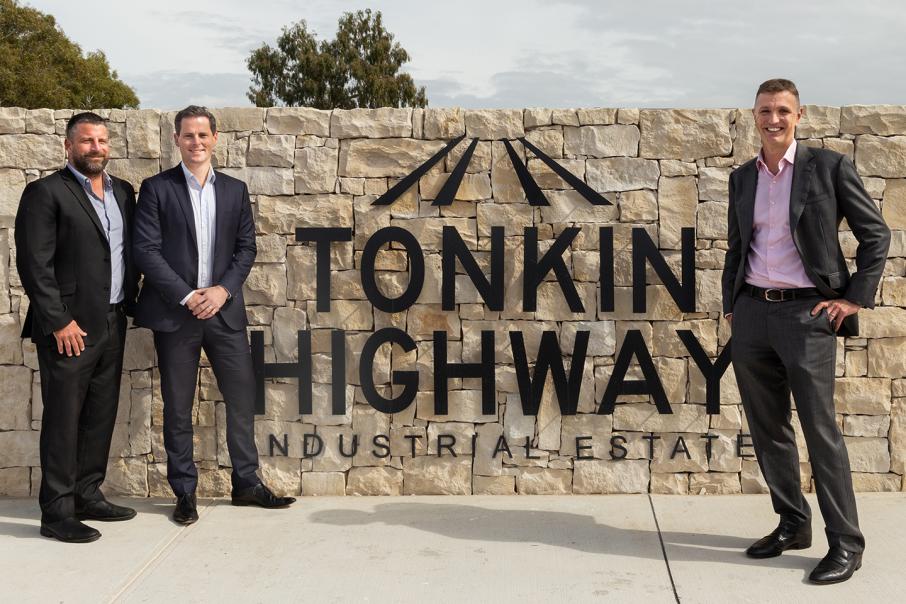 Linc Property has persevered through a challenging industrial property market to officially open its Tonkin Highway Industrial Estate, with the precinct more than 70 per cent sold.

Linc has developed a 40-hectare estate, bounded by Railway Parade and Tonkin Highway, positioning it as one of Perth’s most central and accessible industrial precincts.

Linc bought the property from Wesfarmers in late 2016 for $45 million, after the multinational had fully remediated the site.

Wesfarmers had produced superphosphate at the site from the 1920s until the late 1970s, although the conglomerate continued to occupy the property until around 2000. This was around the time Linc became interested in the property, although it had to wait longer than anticipated to get its opportunity.

“We started looking at it in the early 2000s, talking with Wesfarmers about potentially developing the site,” Linc director Ben Lisle said.

“Wesfarmers made the decision they wanted to go through the environmental remediation process themselves before they took it to market, which probably took a little longer than they expected.”

Wesfarmers offered the site in a difficult market, but Linc was confident of the area’s potential and suitability for its existing portfolio.

“When it was brought to market, it was a pretty weak market and it took a leap of faith,” Mr Lisle told Business News.

“It was the weakest market conditions I had seen, even worse than the GFC, but we believed in the area.

“All of our estates have been infill sites where there has been some complexity. We focus heavily on the premium areas where we can get something of scale and, as long as you’ve entered under the right terms, there will always be demand there, even in a weak market.”

Mr Lisle said the group had worked closely with the City of Bayswater to deliver a high-quality estate with a particular focus on landscaping and street trees – helping the council in its aim to increase the amount of tree canopy coverage in the city by 20 per cent over the next five years.

Raine & Horne Commercial director Anthony Vulinovich said lots within the estate had been priced at 10 to 15 per cent below historic land values in the area, with lot sizes ranging from 1,100 square metres to 1.5 hectares.

“Pricing is attractive relative to Osborne Park, Balcatta and Belmont, which are the only industrial locations comparable in terms of proximity to the CBD,” Mr Vulinovich told Business News.

He said demand for quality industrial land was increasing, with a lift of confidence at the upper end resulting in larger land sales and leasing of warehouses between 1,000 and 3,000sqm.

“This confidence probably wasn’t there in the market 18 months ago and we expect that to trickle down the market to the smaller areas and the smaller block sizes as we move forward,” Mr Vulinovich said.

Primary demand was coming from mining services firms and logistics-based warehousing, as well as increased investment from self-managed super funds.

“It was a tough start to the estate because confidence was pretty low, but we achieved excellent sales results in the first 12 months because of the location and what was on offer in terms of transport, the train station within 500 metres, the proximity to the airport and the CBD,” Mr Vulinovich said.

Sales are at more than 70 per cent of available lots, with prices having firmed as the estate has taken shape and buyers have been able to see progress.

Mr Lisle said the Tonkin Highway Industrial Estate had also benefited from significant interest from the food industry, with four buyers from that sector, due to the estate’s proximity to the CBH and airport. In addition, the estate is fully gas reticulated, making it more attractive to food services firms.

He anticipates the remaining lots will be absorbed in the next nine months and the estate would be built out not long after.

“If you look at all our estates – this is our fourth – we tend to operate at the mid to upper end of the market and people tend not to buy just to sit on it,” Mr Lisle said.

“They buy to move quickly.

“The price point means the quality of build is also high, because people do not want to compromise on the build.”