Lithium Australia has mapped three swarms of outcropping lithium-rich pegmatites over a total strike length of 2.5km and widths to 50 metres at its Youanmi project near Sandstone in the Murchison region of WA. The company will use recently acquired high-resolution geophysical surveys of the region, along with its recent geological mapping program, to delineate lithium drilling targets at the broader Youanmi project. 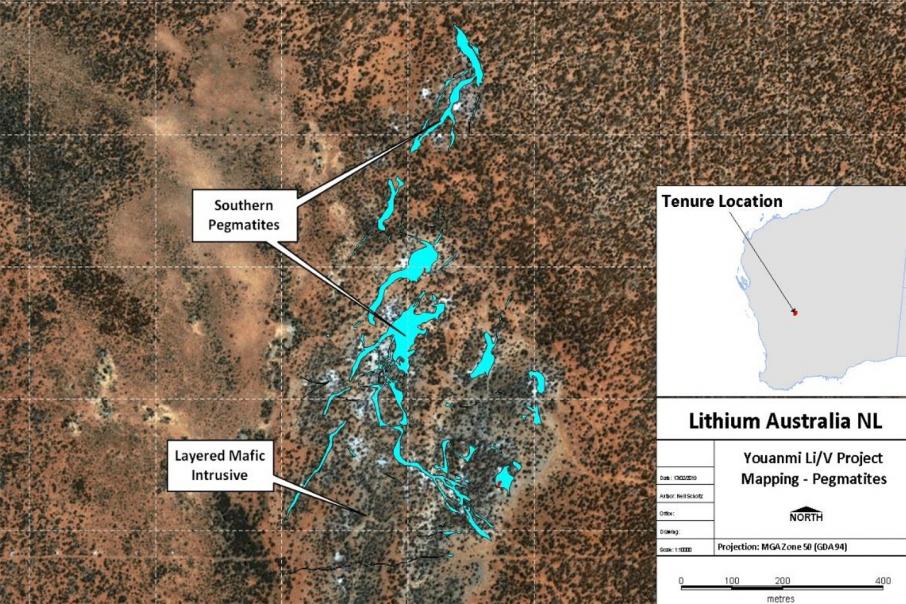 Multi-commodity explorer Lithium Australia has mapped lithium-bearing pegmatites containing the mica mineral lepidolite, over a total strike length of 2.5km and widths of at least 50 metres at its Youanmi project near Sandstone in the Murchison region of WA.

In October last year, the company signed an option to acquire the project from private exploration company Diversity Resources, which is also prospective for vanadium, over three contiguous exploration licences covering about 450 square kilometres.

Initial sampling turned up lithium values to 4.2% lithium oxide, which was also anomalous in caesium and tantalum, pointing to a potentially highly fractionated swarm of pegmatites in the region.

At least three separate prospect areas occur throughout the optioned tenement package and the company believes that extensive sheetwash in the area may obscure the true potential of the district.

According to the company, the pegmatites intrude layered mafic rocks, which themselves host vanadium-rich magnetite horizons.

Lithium Australia will use recently acquired high-resolution geophysical surveys of the region, along with its recent geological mapping program to delineate lithium drilling targets at the broader Youanmi project.

Lithium Australia Managing Director Adrian Griffin said: “The widespread occurrence of lepidolite in a location of outstanding infrastructure augers well for the future of the Youanmi project.”

“Anomalous caesium may also be indicative of further potential this pegmatite suite may have, caesium being in short supply globally, and resource inventories at historically low levels. We are planning on drilling both the lithium and vanadium occurrences in the near future.”

SiLeach is a proprietary chemical process that can extract lithium from lower grade ores without the need for expensive, energy-hungry roasting.

Lithium Australia has agreed to pay Diversity $100,000 for a six-month option to acquire the three exploration licences. This can be extended by another six months by paying another $100,000.

The company can then acquire the licences by issuing $3.1m in scrip and granting Diversity the greater of either a gross production royalty of 2%, or $1 per tonne of material mined and processed.

Mr Griffin added: “Recent advances in our battery technology demonstrate that materials such as lepidolite, which is abundant at Youanmi, can be processed to produce viable precursors for lithium-ion batteries.”

In November, the company produced a product containing between 90% and 95% lithium phosphate at its second generation SiLeach pilot plant trial at ANSTO Minerals’ facility in New South Wales.

The timing of Lithium Australia’s ventures could not be more exquisitely timed, with US-based thinktank Benchmark Mineral Intelligence or “BMI” recently indicating that: “In only 14 months ago we have gone from 17 lithium-ion battery megafactories to 70. In gigawatt hour-terms we have gone from 289 GWh to 1,549 GWh, that’s the equivalent of 22 million pure electric vehicles worth of battery capacity in the pipeline.”

“The scale and speed of the growth in the lithium-ion battery sector is unprecedented and it will have a profound impact on the raw materials that fuel these battery plants.”

“The scale of investment will also drive the cost of lithium-ion battery production down below $100 kWh this year. This adds extra impetus to this mega-trend of battery megafactories and the greater impact on the demand for critical battery raw materials of lithium, cobalt, nickel and graphite ...”.

Based on this analysis, Lithium Australia seems to be lining its ducks up pretty well to become a major player in this emerging sector over the next decade.