AVZ Minerals has initiated a DFS for its Manono lithium project in the DRC after a scoping study outlined that a 5Mtpa operation could generate a whopping pre-tax NPV of USD$2.63b at an IRR of 64%. Manono boasts one of the world’s greatest lithium resources at 400 million tonnes grading 1.65% lithium oxide and 715ppm tin, most likely placing it in the top three lithium deposits around the globe. 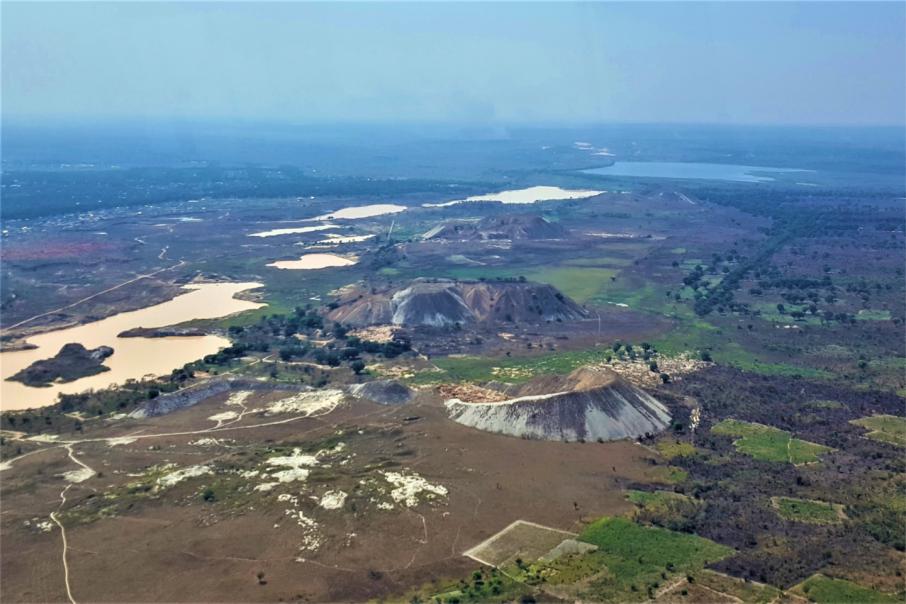 Aerial overview of AVZ’s Manono lithium-tin project in the DRC, with the flagship Roche Dure deposit in the foreground.

Move over Wesfarmers, move over Talison, move over Pilbara Minerals, there’s a new player at the lithium table who is clutching a handful of aces when it comes to the size and grade of its hard rock lithium deposit.

The little known, Perth based and ASX-listed AVZ Minerals is sitting on a truly stunning, world-class lithium deposit in the Democratic Republic of Congo that dwarfs most of the massive headline grabbing lithium deposits in Western Australia – both in terms of tonnage and grade.

In fact, AVZ’s deposit is so large and its grades are so good that it is difficult to understand why AVZ’s name doesn’t instantly ring a bell with the lithium glitterati in the same way that the names Pilbara Minerals, Talison and Kidman Resources have become household names amongst the lithium enthusiasts.

AVZ says its project will show high margins, enjoy a long life and lies within the lowest quartile of production costs globally.

The company’s colossal Manono lithium-tin project, located in the south-eastern part of the Democratic Republic of the Congo, now boasts 400 million tonnes grading 1.65% lithium oxide and a very respectable 715 parts per million, or “ppm”, tin.

To put this in some perspective, Wesfarmers recent $776m takeover bid for Kidman Resources would see it own just 50% of the Mt Holland lithium deposit in WA that holds 189 million tonnes grading 1.5% lithium oxide.

Pilbara Minerals has etched out a market cap of $1.25b on the back of its Pilgangoora lithium deposit but even at 226 million tonnes grading 1.27% lithium oxide, Pilgangoora still looks a little pale against AVZ’s Manono project.

Importantly, over 67% of AVZ’s tonnes at Manono are already classified at the more confident “measured and indicated” resource status, from which the company will optimise its ore reserves for the flagship Roche Dure deposit.

The strongly mineralised Manono pegmatite district was a very productive historical producer of tin in the DRC for over 60 years before the industry ceased in 1982 due to the low prevailing tin prices of the day.

The tin price has since recovered somewhat from those dark days and now commands just under USD$20,000 per tonne and hence, could be a valuable by-product along with tantalum at Manono.

AVZ has just spent the last two years drilling out its spectacular Roche Dure deposit, which itself only covers a 2.7km strike of the 13.5km length of the pegmatite system discovered at Manono to date.

AVZ’s best intersection at Manono, a mind-blowing, 302 metres, grading 1.54% lithium oxide from about 80m down-hole, would no doubt have seen the company’s Perth office staff ditching their coffee cups in favour of champagne flutes when the result came rolling in.

China’s Ministry of Land & Resources even described the Manono district in the DRC as the “Escondida” of lithium, likening it to BHP’s massive Escondida porphyry copper project in Chile.

And there are plenty of other hits on the highlight reel, including a hard to fathom 89m hit, averaging an impressive 2.01% lithium oxide from the Carriere de L’este pegmatite to the northeast.

This grade is on par with the revered Greenbushes deposit in WA, but with a considerably wider intersection.

The company has thrown about 27,500 metres of diamond drilling at Manono over the last two years, coming in at around USD$20m.

Last October, it produced a Scoping Study for the project that considered a throughput scenario of 2 million tonnes per annum producing 440,000 tonnes of lithium concentrate at near 6% lithium oxide for export, with the CAPEX topping out at about USD$160m.

More recently, AVZ sharpened the pencil at Manono, outlining an extended and updated Scoping Study that considered a throughput of 5 million tonnes per annum, producing 1.1 million tonnes of lithium concentrate at the same grade, effectively showing the potential scalability of the project.

The ore deposit is so wide that the in-pit strip ratio comes in at 0.55 to 1, which effectively means it extracts 1.8 tonnes of ore for every tonne of waste – a proposition that would have most West Perth miners jumping out of bed with a spring in their step.

The key outcomes of the 5 million tonne per annum study showed an initial mine life of 20 years, generating a pre-tax NPV of USD$2.63b at an IRR of 64%, with a CAPEX ranging between USD$380m and USD$400m, inclusive of a USD$78m contingency.

Payback is expected to be about three years.

AVZ holds a 60% interest in Manono and hence, its share of the NPV is approximately AUD$2.25b on a pro-rata basis, which is a surprisingly similar number to its total shares on issue – 2.28 billion this week.

The company has a market capitalisation currently of $140m.

The remainder of the project area is 30%-owned by the DRC Government’s La Congolaise D’exploitation Miniere SA and 10%-owned by private company Dathomir Mining Resources SARL.

The Scoping Study reveals potentially enviable margins too of USD$427 per tonne of dry spodumene concentrate produced, based off an assumed sale price of USD$750 per tonne.

AVZ Managing Director Nigel Ferguson said: “Not only do the results of the 5 Mtpa study confirm the excellent quality of the Manono Project, it further underlines the expandability of the project. Management will now turn its attention to selecting the optimal throughput level in conjunction with consultants working on the DFS.”

Based on the robust outcomes of the extended Scoping Study, the company will now accelerate its DFS for Manono, which is scheduled to hit the streets in the second quarter of 2020.

AVZ has not yet even factored in the value of the tin and tantalum by-products of a mining operation at Manono, which are not inconsequential and could appreciably offset a lot of the mine operating costs.

The project will also produce some of the cleanest and potentially highest-grade spodumene concentrates globally too, as it contains very low amounts of the contaminants, iron, fluorine and phosphorus.

Purities of this type are quite rare and well sought-after by producers of battery grade lithium carbonate products for the manufacture of lithium-ion batteries.

So much so, that the company believes its products may even invoke a premium price, much like higher-value “lump” iron ore products command better prices than inferior, lower-grade ores, which often have to be blended before sale.

While there is still plenty of metallurgical test work to be done on the Manono ores, this potential differential could make the project all the more enticing to picky investors, who still don’t quite get the longer-term thinking required to understand where the lithium industry is heading.

For instance, German vehicle manufacturer Volkswagen, a strong backer of the electric vehicle industry said in early April: “Lithium will in the near future be one of the most sought-after raw materials on earth.”

AVZ is clearly a convert and is well-funded to turn the dream into a reality with $12m in cash reserves that will go some way towards generating the DFS it needs to convince others of the viability of Manono.

Despite the occasional commentary about the in-country risk in the Democratic Republic of Congo, behemoths such as Ivanhoe Mines and Barrick Gold both said last month that they had committed to investment in the DRC, with Barrick “upbeat” about the new President Felix Tshisekedi’s stance on mining and investment in that country.

Even Ivanhoe’s co-Chairman and revered mining veteran Robert Friedland delivered a glowing recommendation saying: "This is a time of historic opportunity for responsible development of the mining sector in the DRC. We look forward to working with all members of the newly elected government to introduce the DRC to investors around the globe.”

AVZ is led by Nigel Ferguson, an Australian geologist who joined the company in 2017. Ferguson has spent the last 15 years kicking rocks around in the DRC and has been involved in numerous gold and base metal exploration and resource developments in-country, so this isn’t his first rodeo.

With Wesfarmers takeover bid for Kidman triggering a renewed surge in interest in the lithium space recently, AVZ is holding all the cards with its remarkable lithium deposit in the DRC.

If the new DRC Government turns out to be pro-mining, as many hope and think it will, then AVZ has a global scale opportunity laid out before it.