A ‘manly’ man wants a beer and a steak.

Meat lovers have another reason to cheer, and say ‘cheers’, with the third Hippo Creek steakhouse in Waterford Plaza coming with a tavern licence. 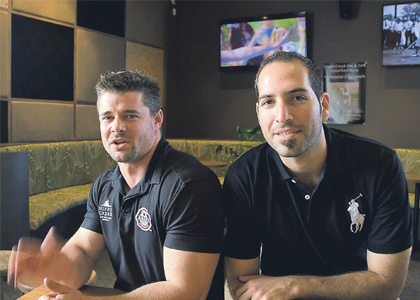 Meat lovers have another reason to cheer, and say ‘cheers’, with the third Hippo Creek steakhouse in Waterford Plaza coming with a tavern licence.

RUNNING a steakhouse is a far cry from Gareth Simpson’s teenage aspiration to become a pilot, but it seems the South African may have found his calling with the Hippo Creek brand.

It’s been eight years since Mr Simpson bought the first Hippo Creek restaurant in Scarborough from its Zimbabwean founder.

Since then he’s relocated the restaurant to a specifically built venue at Hillary’s Boat Harbour, and continued expanding with business partner and fellow South African, Daniel Gomer.

The men have now embarked on a new venture, at Waterford Plaza, following the establishment of a smaller Hippo Creek restaurant at Subiaco in 2010.

But the Waterford Plaza site has a drawcard the other two restaurants don’t, which goes a long way to explaining why it was chosen -a tavern licence from the bar that previously stood on the site.

“It’s not impossible but it’s extremely difficult to get a new tavern licence,” Mr Gomer says.

“The opportunity to be able to sell a drink without food was something that had been attractive for us as an ancillary to what we do.”

When it comes to the best way to enjoy one of the many specialty steaks on offer at Hippo Creek, Mr Simpson says it’s all the better with a beer in hand.

“In South Africa, drinking and steakhouses go hand in hand - it’s a manly meal,” he says.

“I think the Hillary’s restaurant loses about $1 million in turnover because we can’t just sell a drink.”

The son of a miner, Mr Simpson came to Western Australia with his family from a town just outside Johannesburg in 1997.

After deciding aviation was a bit of a risky career move given his less-than-perfect grades, he dipped a toe in the hospitality waters at Des de Klerk’s Trigg Island Cafe. He then bought the Scarborough Hippo Creek with a salary earned in the mines.

“I have the sort of dad who says; ‘well listen, you’re not going to earn enough money working for other people, why don’t you look at buying it’,” Mr Simpson says.

But he admits to being less than enthusiastic when Mr Gomer approached him with the proposal to grow the business.

“I wasn’t looking to go anywhere; Hillary’s was a monster - I had just gone from a little 70 or 80 seater at Scarborough to a 240 seater,” Mr Simpson says.

However the strong Hippo Creek brand enabled the business to thrive with the expansion - despite increasing competition from new steakhouses offering a similar experience.

“When something new opens up it does attract the people at first, but our brand has a name for itself already and you’ve just got to believe in your product,” Mr Simpson says.

No prizes for guessing that a meal at one of the three Hippo Creek restaurants is founded on a love of meat - which all comes as Australian Angus beef with Meat Standards Australia certification.

However, experienced chefs are sought not only for their talent with meat, but also dishes such as fish and vegetarian meals.

For the first time, recently, Messrs Simpson and Gomer have taken their search for staff to South Africa and made use of the 457 temporary migration visa to employ about six kitchen hands.

Having only just opened the 300-seater Waterford Plaza restaurant, the pair plan to get the three restaurants running smoothly before considering any future expansions - but they’ve indicated Fremantle as a desirable location.