Looking for something new next time you fancy a cuppa? Take a leaf out of this book. Russell Quinn reports. 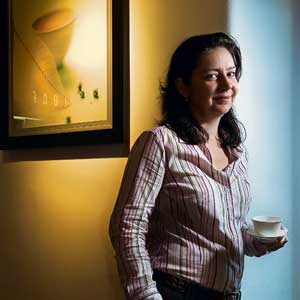 GROWTH: Kate Goldie is confident that the growing popularity of drinking tea will ensure the success of her current and future teahouses. Photos: Grant Currall

TO the uninitiated, a 'Lapsang Souchong', an 'Island Groove' and a 'Keemum Congou' might conjure up images of exotic dances in far-flung locales. And what about 'Green Gunpowder'?; a chemical reaction gone wrong, perhaps?

Those with a more refined cultural knowledge, however, will recognise the names of some delightfully different types of tea.

And nobody knows more about, or loves, tea more than Kate Goldie.

"I love tea and I couldn't possibly tell you what my favourite tea is because it depends on the time of day," Ms Goldie tells Gusto.

"A beautiful brisk Irish Breakfast in the morning to get your day going or a fantastic Oolong Iron Goddess in the afternoon is absolutely sensational.

"That oolong is like the wine of tea; you have that with lunch, it's just like having a wine - sensational for digestion and a good feeling, that's low in caffeine, low in tannins and just a terrific brew."

As owner of the Leaf Tea Merchants, Ms Goldie knows nearly all there is to know about the historically popular plant.

"We offer about 48 different types of tea but there are hundreds and hundreds of tea out there," she says.

"You've probably heard of white tea, which has the highest antioxidants as it's the purest baby buds of the picking.

"We sometimes joke with our customers that they are picked by virgins wearing white cotton gloves in the light of the full moon and rolled on their inner thighs before being shipped to us."

Successfully operating both of Perth's Leaf teahouses for the past few years - the original store in Cottesloe and the more recent addition in Mt Lawley - requires Ms Goldie to be across everything related to the tea business.

This includes sourcing top-quality tea in highly sought after markets such as Sri Lanka, having a comprehensive understanding of the region's harvest and climatic factors, staying abreast of the tea world's latest brewing techniques, and ensuring that state-of-the-art brewing equipment from Germany is readily available for Leaf staff members to utilise when serving high tea to patrons.

And the "tea revolution", as Ms Goldie describes it, where the public becomes more aware of the health benefits of drinking tea as opposed to coffee, helps drive her business and increases demand for her expertise.

However, Ms Goldie is conscious of the social demand for coffee, reluctantly installing a coffee machine in the Cottesloe store a short time ago. And she's considering a similar installation at Mount Lawley within six months.

"It's definitely an art form - brew time and quality of water and the temperature of water are very important," she says. "And tea bags are are just evil."

Despite her obvious, and often daunting, display of tea expertise, Ms Goldie is still fairly new to the tea trade.

After 17 years running the technical side of television broadcast operations for the likes of the BBC in London and television stations in Western Australia, Ms Goldie, with the help of her father, automotive dealer Ian Goldie, bought the twin stores and the global franchise rights in August 2007.

The Goldies bought Leaf from Phil May, a founder of Dome Coffees, shortly after the first international Leaf Tea House franchise was established in Dubai.

Ms Goldie has big plans for further expansion locally, including setting up a South Perth teahouse on the Angelo Street cafe strip within the next 12 months and eventually establishing a Leaf Tea House on Rottnest Island.

"Without a doubt, when you start to get multiple locations you can offset the cost of marketing and all that, and even with staffing... that really helps," she says.