Local hospitality entrepreneur Andy Freeman is leading a move to build a local branch of South Australian brewery Pirate Life in Perth, with a three level, 1000 person venue to open on Murray Street next year. 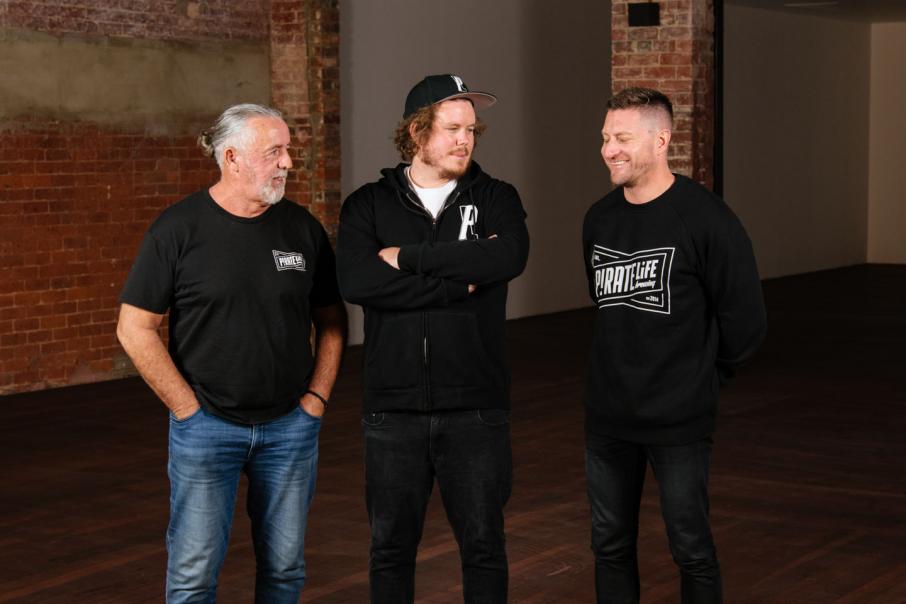 Michael Cameron (left), Jack Cameron and Andy Freeman will be setting up the new venue on Murray Street. Photo: Supplied

Local hospitality entrepreneur Andy Freeman is leading a move to build a local branch of South Australian brewery Pirate Life in Perth, with a three level, 1000 person venue to open on Murray Street next year.

Pirate Life opened in Adelaide five years ago, with the brewery acquired by CUB owner AB Inbev in November 2017.

Jack Cameron said he was stoked for the brand to be coming to Perth.

“Myself and MC, who is my old man, we spent most of our time around Freo, Jared is from Margaret River,” he said.

“I was working at Little Creatures for four and a half years, brewing beer for them, and Red was employed as head brewer when they started Cheeky Monkey brewery down in Margaret River.

“It's really exciting… it's such a good beer market over there (in Perth).”

Mr Freeman owns Sneakers & Jeans, the outfit behind venues such as Hadiqa, Varnish on King, and Flour Factory.

It will be Mr Freeman’s venue, Mr Cameron told Business News, with Pirate Life bringing the brewery and brand.

“Andy Freeman has been a pretty solid operator in Perth for the past 20 odd years,” he said.

The team are working with Dubai-based architects Stickman Tribe, which is headed by another former Perth boy, Marcos Cain.

Mr Cameron said the design was still in early stages, with construction not starting until next year.

“There some pretty crazy (design) concepts being thrown around now,” he said.

The vibe will be fairly raw, with steel and concrete, Mr Cameron added.

That is opposite Tiger Lil's bar, near Milligan Street.

Business News estimated the rebuild will cost about $2 million.

Mr Cameron said Pirate Life had benefited from the deal with CUB, which had given capital for expansion.

It had also introduced the team to Mr Freeman, who works with the company in Perth, he said.