88 Energy Alaska-focused 88 Energy is closing in on a potential farm-out of the conventional rights at its Project Icewine in Alaska’s North Slope, with its preferred bidder scheduled to make a final decision in June. Final analysis of the HRZ shale at the same project has indicated that more than half of its large lease holding of about 528,000 acres remains prospective for unconventional oil. 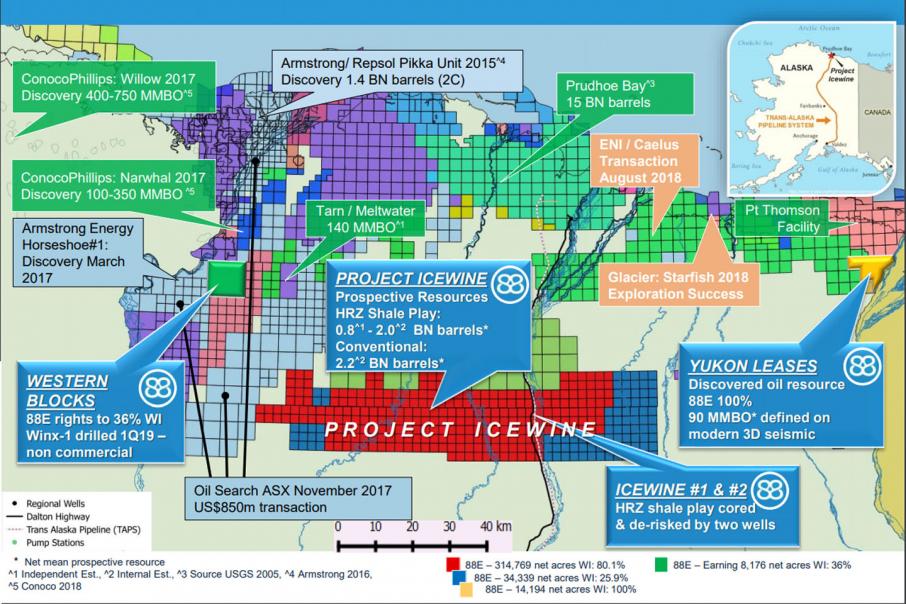 Alaska-focused 88 Energy is closing in on a potential farm-out of the conventional rights at its project known as “Project Icewine” in the famed North Slope oil province to its preferred bidder.

The company said that third-party due diligence is now largely completed and a final decision on approval of the farm-out is scheduled for June.

88 Energy currently has an 80% interest in Project Icewine.

The company has also completed an analysis of the HRZ shale at Project Icewine that confirmed its potential as an unconventional oil play.

Management said the Franklin Bluffs location where both Icewine unconventional wells were drilled, is now considered to be outside the prospective fairway as the thermal maturity window for volatile oil in the HRZ appears to occur at a lower temperature than that typically seen in other shale plays.

As a result, the kerogen – the solid, insoluble organic matter that is the source of oil – at the Franklin Bluffs location has converted into solid bitumen that has poor porosity and connectivity.

Despite this, the large leasehold of about 528,000 acres held by the Project Icewine JV means that over 50% of the acreage remains prospective for unconventional oil.

88 Energy and its partners are now planning to access material from regional wells to conduct additional analysis to confirm improved effective porosity and connectivity.

The JV continues to receive third-party interest in the HRZ shale and an informal farm-out process is well underway.

Separately, the company has started discussions with nearby lease holders to optimise a monetisation strategy for the existing discovered resources in its Yukon Leases, which contain the 86 million barrel Cascade prospect that was drilled in 1994.

Recent 3D seismic carried out by the company has also upgraded Cascade from a lead into a drillable target.

Managing Director Dave Wall said:“Final decision on approval for the conventional farm-out is now scheduled for June 2019 and we remain optimistic of a favourable outcome for our shareholders in the very near term.”

“It is also encouraging that recent analysis of the HRZ provides both some answers as to why Icewine-2 did not flow as expected but also that the play remains prospective on our leasehold.”