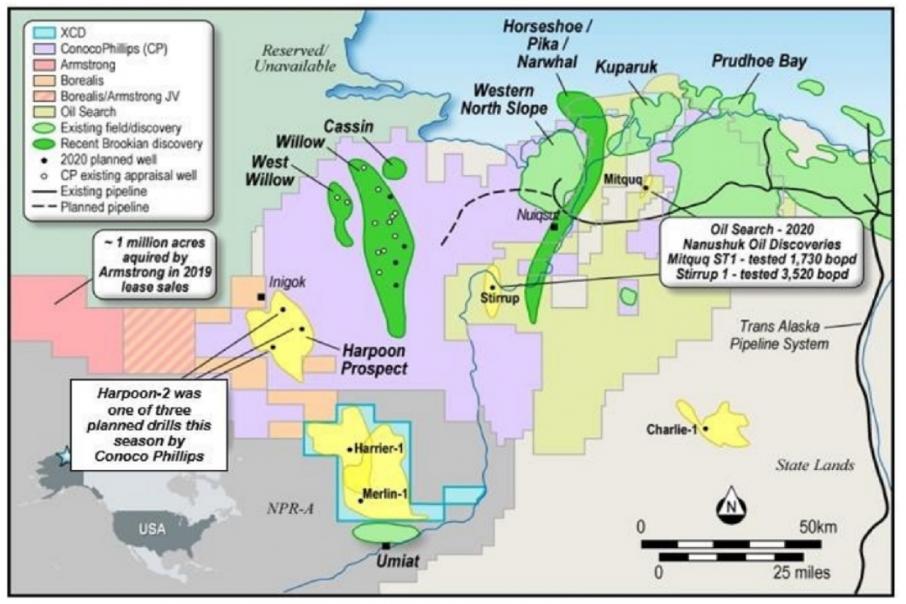 According to XCD, the offer from 88 Energy implies a share price of 1.46 cents per XCD share, a significant premium to the 1.0 cent price when XCD raised capital back in November last year when the oil price was at a relatively healthy US$50 per barrel.

XCD’s board also said the implied value premium was substantial when compared to a range of volume-weighted average price calculations considered since the takeover was announced on April 24th.  The range of calculated premium varies from a 46-213 per cent.

The offer of 0.7 88 Energy shares for each XCD listed option also offers an attractive premium of 112 per cent, based on the April 24th closing price of the listed options and a larger 162 per cent premium when calculating the volume-weighted average price between listing on February 25th and the announcement date on April 24th.

Whilst the oil price has been volatile and both company’s activities have added to the level of volatility, XCD said its independent expert, the Perth-based RISC Group, has concluded that the offer is both fair and reasonable.

Interestingly, RISC concluded that XCD Energy security holders were more likely to be better off accepting the offer than not.  RISC said the valuation of XCD Energy on a per-share basis, at the time of the offer, was within a range between 0.6-1.1 cents per share and clearly below the value of the offer.

XCD’s board had earlier suggested the listed options had very little liquidity on market which makes the swapping of those options for fully paid 88 Energy shares was likely to provide an additional benefit to XCD option holders.

XCD’s managing Director, Dougal Ferguson also has 20 million performance rights, half of which will vest and convert upon 88 Energy acquiring more than 50 per cent of XCD shares and the offer being declared unconditional.  At that point, the XCD directors will own or control 4.78 per cent of XCD’s expanded share capital.  Mr Ferguson has indicated that he will accept the offer for the parcel of XCD shares issued on conversion.

The directors have all indicated that they will accept, or procure the acceptance of all XCD shares and listed options they hold or control, in the absence of a superior offer on the understanding that the independent expert continues to conclude the offer is reasonable.

XCD also noted in its target statement that thirteen XCD shareholders controlling 18.5 per cent of shares on issue had already entered into pre-bid acceptance deeds to accept the terms of the offer.  Those shareholders also control 6.8 per cent of the listed XCD options on issue.

XCD’s board also said that access to 88 Energy’s much stronger balance sheet and expanded lease portfolio would be beneficial for its shareholders and the potential halving of corporate overheads by having just one listed entity further underpins the merger opportunity.

XCD said the combined group would have a larger, stronger asset portfolio and XCD shareholders would remain connected to its Peregrine project located west of 88 Energy’s Icewine project and just south of a number of recent oil discoveries by US-based operators.

88 Energy said in its bidder’s statement released earlier, that XCD shareholders would benefit from 88 Energy’s established oil exploration and appraisal capabilities to be deployed across the three complimentary lease areas, namely 88 Energy’s Icewine and Yukon projects and XCD’s Peregrine project.

XCD Energy also said its shareholders would hold up to 20 per cent of the newly-combined group if 88 Energy was successful in acquiring 100 per cent of XCD Energy’s shares and listed options.  The deal provides all shareholders with ongoing exposure to Alaska’s oil rich North Slope hydrocarbon basin that has thrown up multiple impressive discoveries over time.

With the takeover now looking like a done deal, the combined group will have a net lease position of around 520,000 acres, or over 2,100 square kilometres under lease in one of the world’s oiliest basins.

And no doubt 88 Energy management will continue to explain to any slow-moving XCD shareholders the benefits of 88 Energy having some A$28 million in the bank, as at the end of March.