88 Energy has cracked 1,512 feet, or 460 metres, as it drills its way towards its highly anticipated 600-million-barrel prospective oil target at an interpreted depth of 6,000 feet, or 1,829 metres, below the frozen arctic ground in Alaska. Its moment of truth will arrive in just three to five days when it will get to test the reservoir sands of the oil-rich Nanushuk formation target. 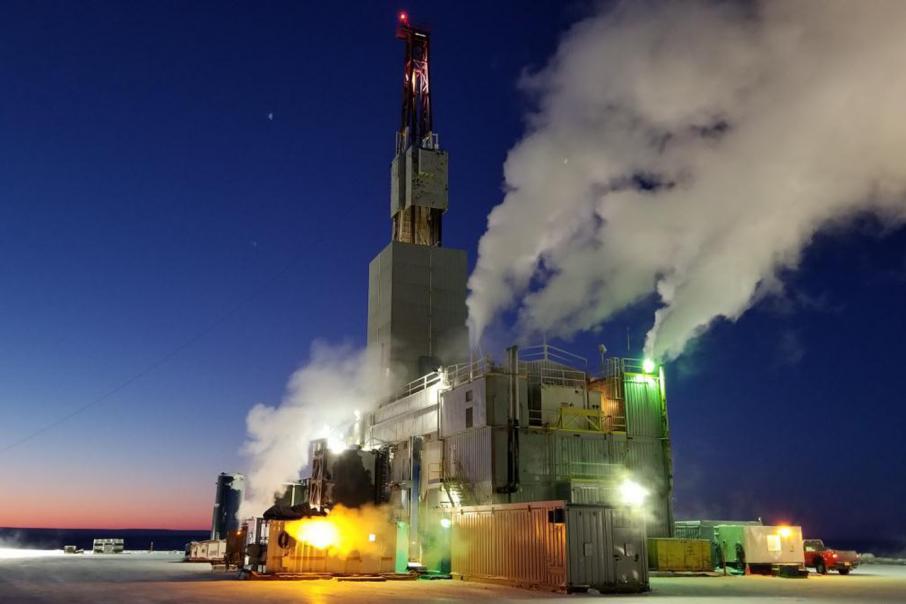 88 Energy has cracked 1,512 feet on its way towards its planned 6,000-foot oil target below the frozen arctic ground in Alaska. Credit: File

88 Energy has cracked 1,512 feet, or 460 metres, as it drills its way towards its highly anticipated 600-million-barrel prospective oil target at an interpreted depth of 6,000 feet, or 1,829m, below the frozen arctic ground in Alaska. The ASX-listed company’s moment of truth will arrive in just three to five days when it will get to test the reservoir sands of the oil-rich Nanushuk formation target.

The market appears to be anticipating a win for 88 Energy too with punters running its share price up from a close of $0.017 yesterday to an intraday high of $0.023 today on big volumes.

Only a week ago it was trading at around a cent.

The company is hoping to cash in on recent spectacular success by other oil explorers in the neighbourhood of 88 Energy’s frozen tenements.  Merlin-1 is the company’s first test well on its Project Peregrine leases which 88 Energy secured when it took over fellow Alaskan oil hopeful, XCD Energy back in early 2020.

With ‘black gold’ still the target for the company, its nearest neighbour, ConocoPhillips, already has its hands on the 750-million-barrel Willow field and the reasonably fresh Harpoon oil discovery, both of which sit around 20 miles north along the winter ice road which passes 88 Energy’s ground.

Importantly, Perth-based 88 Energy locked in a farm-in partner to do the heavy financial lifting with Alaska Peregrine Development Company, or “APDC” stumping up the first US$10m for the exploration hole to earn a 50 per cent interest in Project Peregrine.

The company recently rattled the tin and tucked away around $12m to pad out its balance sheet ahead of the spudding of Merlin-1.  Management said it could be up for as much as US$4m as its 50 per cent share of any extra costs over and above the farm-in amount.

The region’s crude oil explorers recently revealed the giant oil potential of the Nanushuk formation after drilling successfully into the topset sandstones of an ancient, buried delta, more than half a century after the discovery of the giant Prudhoe Bay oil field on the Arctic coast of Alaska.

Importantly, the Trans-Alaskan-Oil Pipeline which was originally built to carry Prudhoe Bay’s paydirt south to Alaska’s export terminal near Anchorage has spare capacity for anything 88 Energy and its neighbours might find.

Alaska’s North Slope recently attracted another Aussie oiler in Oil Search who made a couple of fresh Nanushuk oil discoveries last year, suggesting the oil play has some real legs to it.

88 Energy also announced recently it had entered into a share subscription agreement with ELKO International LLC, one of the major contractors on site at the Merlin-1 test well, whereby ELKO will be issued 360 million shares at a share price of 1.8 cents.

Importantly for 88 Energy, the price paid by ELKO represents a 225 per cent premium to the price of the capital raise completed just last month and puts a further A$6.48 million into 88 Energy’s saddlebags while delivering ELKO a serious profit with the benefit of today’s price.

88 Energy Managing Director, David Wall said:  “The endorsement of the project by ELKO as we enter the critical phase of the drilling is encouraging and will serve to fund the Company’s share of the recently announced cost overruns."

Alaska’s oil potential has always been well known but recent activity has placed it front and centre in the spotlight and 88 Energy appears to be at centre stage for now.

Just how big the final curtsy will be is anyone’s guess but if the market has it right, it just might be cause for applause.