82m of graphite for BlackEarth in Madagascar

ASX listed BlackEarth Minerals has made an exceptional near-surface intercept of 81.8 metres grading 6.1% total graphitic carbon at the Haja prospect in southern Madagascar that raises the likelihood of a resource upgrade. Further assays from the 26 hole program are expected to be received soon and the company expects to release a maiden JORC-compliant resource estimate for Haja soon. 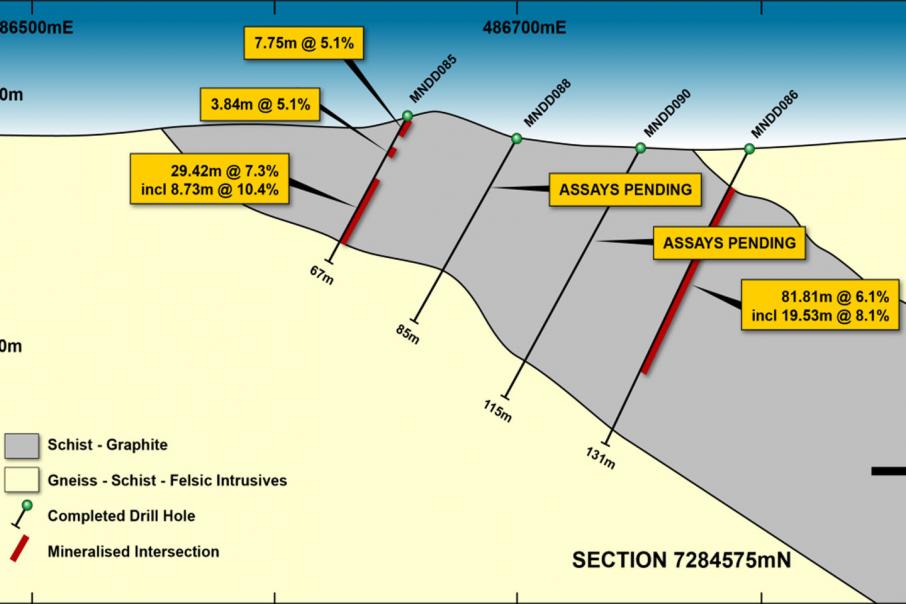 BlackEarth Minerals has hit an exceptional, near-surface intercept of 81.8 metres grading 6.1% total graphitic carbon at the Haja prospect that could host another large scale, near-surface graphite resource in southern Madagascar.

BlackEarth said the first round of results demonstrate that the Haja ore body is thick and consistent with zones of high grade graphite.

They also show that mineralisation is open along strike to the north and open down dip to the east.

Further assays from the 26 hole program are expected to be received over the coming 4-6 weeks and the company expects to release a maiden JORC-compliant resource estimate for Haja in the current quarter.

Earlier this month, the company delivered a maiden resource of 11.2 million tonnes grading 7.1% TGC for the Razafy graphite prospect.

More than 70% of the maiden resource is now at the confident “indicated” status and the deposit contains a high component of the premium “super jumbo” flake and is free of any penalty contaminants.

The company has also started a scoping study for its Maniry graphite project with a focus on the Haja deposit that is expected to be completed before the end of this year.

BlackEarth Managing Director Tom Revy said: “...Haja is considered to have excellent potential to host a large-scale, near-surface graphite resource which we expect to complete the resource estimation in Q4 2018.

“The large aerial extent, outcropping nature and in most cases flat-lying nature of the graphite mineralisation, continues to provide confidence that the prospects in the Maniry Graphite Project area can be readily upgraded to a JORC compliant resource.”

The Haja Deposit is one of many lenses within the Haja Domain, one of three domains the company recently identified within the Maniry project that have an overall exploration target ranging from 260 million tonnes to 380 million tonnes at between 6% and 8% total graphitic carbon.

The drilling success to date at Haja should keep eyes firmly on BlackEarth over the next couple of months as the company looks to firm up the project as a viable mine.