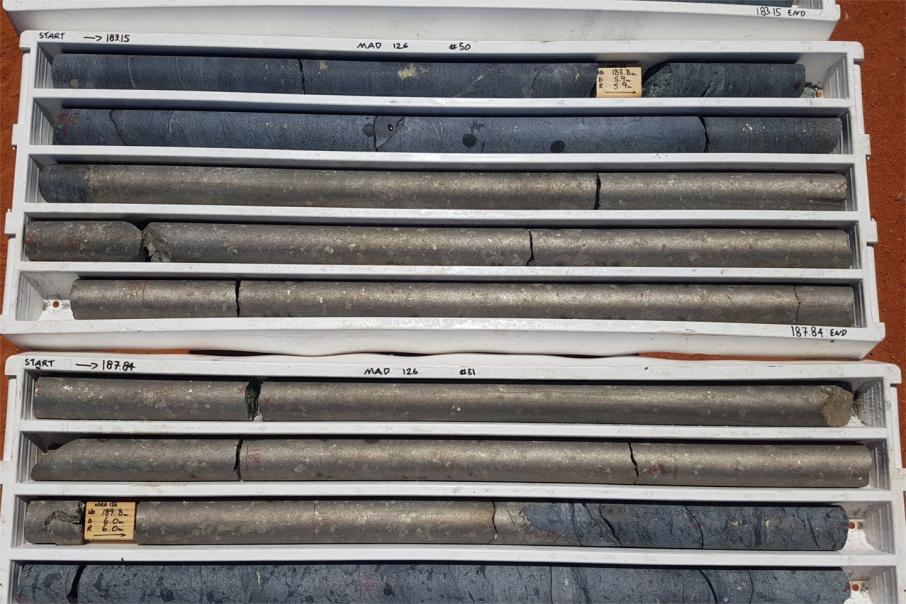 Aspiring nickel producer St George Mining has confirmed that the latest diamond drilling at its emerging Investigators prospect near Leonora in WA has produced the thickest, high grade results at the Mt Alexander project to date.

The assay results for the platinum group metal suite of elements for the same intersections are still pending and may add yet another dimension to this rapidly advancing discovery near Leonora.

St George Mining Executive Chairman John Prineas said: “Grade is king in assessing the economic potential of any mining operation, and we are delighted to receive assays … which confirm thick intersections of high-grade nickel-copper sulphides. The grades for nickel, copper and cobalt are terrific and re-affirm the high-value mineralisation that we have in the Cathedrals Belt.”

“Additionally, it is very satisfying to have these thick high-grade intersections confirm the down plunge component of the mineralisation and further support the increasing potential scale of mineralisation at Investigators.”

“With more strong EM conductors ready to drill, we are confident of intersecting further high-grade mineralisation at Investigators where drilling is continuing 24/7.”

There is potentially more good news to come too, with the company saying that another 4 recently completed drill holes at Investigators all contained nickel-copper sulphides, which seem to confirm extensions of the burgeoning high-grade system at this prospect.

According to St George management, one of these holes appears to have intersected the sought-after mineralisation about 380m down-plunge from where the ore system comes to surface, potentially broadening its footprint even further.

Another new hole drilled over 2.3m of massive sulphides that returned preliminary average portable XRF analyses of 8.1% nickel and 3.21% copper. The confirmation laboratory assays for these holes will no doubt be keenly anticipated.

The diamond drilling program at Investigators is targeting down dip and down plunge extensions of previously identified mineralisation, which is delineated by a very large conductive electromagnetic, or “EM” signature, over at least 1.5km of east-west strike at the prospect.

St George believes the drill intersections recorded to date at Investigators, whilst very encouraging, do not fully account for the size and strength of the EM anomaly there.

It says there is still significant potential for the discovery of further, thicker massive sulphide mineralisation in the general area at Investigators.

St George has been very successful targeting off-hole EM anomalies at Mt Alexander for extensions to the nickel-copper mineralisation and it continues to use this proven geophysical method on an ongoing basis at site.

The Investigators prospect lies at the western end of a 3.5km long east-west trending mineralised corridor that defines the high-grade nickel-copper system being explored by the company and also incorporates the Stricklands and Cathedrals prospects.

The complex nature of the nickel-copper mineralisation at Mt Alexander has St George drawing parallels with the other high-quality WA deposits including the Flying Fox mine in the Forrestania Belt and the Silver Swan mine, north of Kalgoorlie.

Only further exploratory drilling over time is likely to unravel the truth, but it’s an intriguing opportunity for St George’s technical team to contemplate, especially with nickel prices sitting around AUD$15,000 per tonne and copper prices close to AUD$8,500 per tonne this week.