Hot Chili’s latest drilling at the rapidly emerging Cuerpo 3 deposit of its Cortadera porphyry discovery in Chile has extended the thick, copper-gold core of mineralisation by a further 246m, returning a stunning 596 metres grading 0.5% copper and 0.2g/t gold from 328m down-hole. This hole also contains a higher-grade intersection from 430m, that produced 184m @ 0.7% copper and 0.3g/t gold, with significant silver and molybdenum credits. 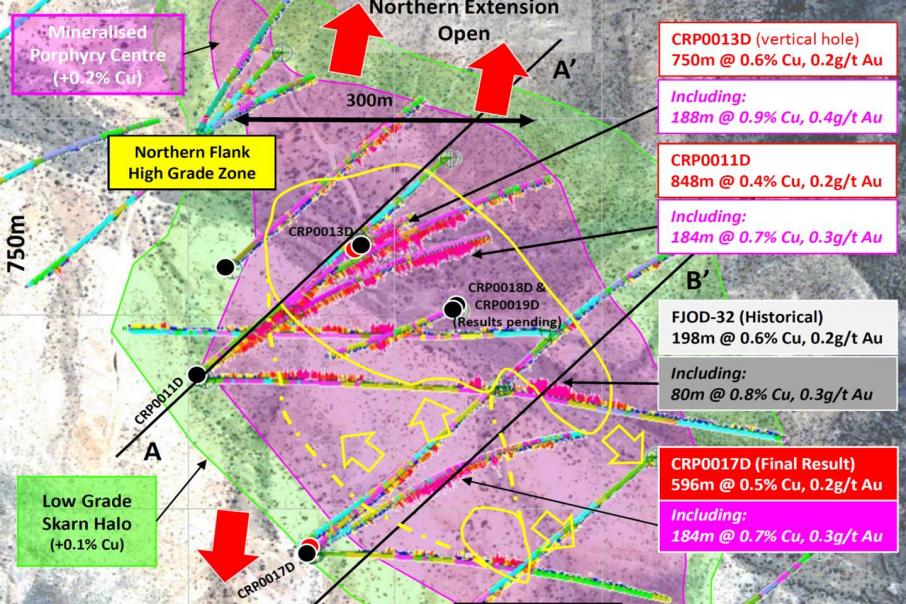 Hot Chili has nailed a 596m long copper-gold drill intersection at its emerging Cuerpo 3 deposit as the Perth-based company ramps up exploration at the Cortadera copper-gold discovery in central Chile, returning a trifecta of stunning and consistent results over the last few months.

The ASX-listed junior said this week that its latest hole, had returned an intersection of 596 metres at 0.5% copper and 0.2g/t gold starting from a depth of 328m down-hole.

This early exploratory drilling has confirmed that a newly uncovered, bulk tonnage, higher-grade zone extends from the northern to the southern flank of Cortadera’s main copper-gold porphyry zone at Cuerpo 3.

A third deep vertical diamond drill hole is now complete at Cuerpo 3 and a fourth hole is currently underway.

Assay results are still pending for this hole.

Hot Chili is fully funded to complete up to 13 additional deep holes as part of the phase two work program and upon completion of this work, an initial mineral resource estimate should be established for Cortadera.

The company recently completed a $12.1 million capital raising to help it develop what it says is one of the South American country’s most significant copper-gold porphyry finds of the past decade.

With a potentially mammoth resource shaping up now at Cortadera just 14km from the already impressive Productora deposit, Hot Chili looks like it is onto a significant, tier-1, bulk tonnage, copper-gold deposit that just might become irresistible in time to any majors that might happen to be sniffing around.

One thing seems certain, however, most of them would now have Hot Chili on their watch lists.