Azumah Resources has completed a high-level scoping study indicating that its Bepkong underground deposit at the Wa gold project in north-western Ghana, could produce 154,000 ounces of gold and generate a cash flow of $47m over 4.5 years. In July, the company delivered a maiden underground resource of 2.4Mt @ 3.59g/t gold for 279,700 ounces at the Bepkong deposit, doubling the previous mineral resource inventory. 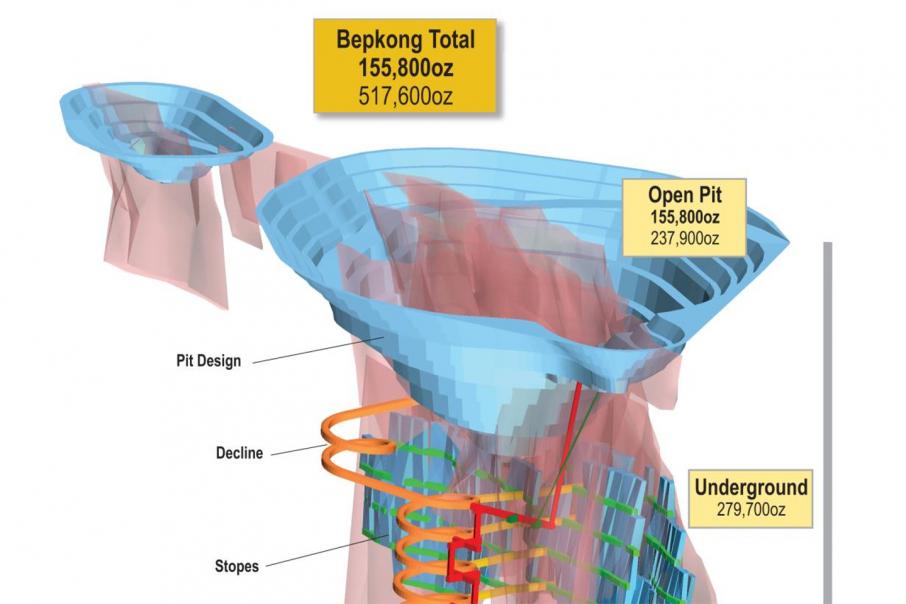 West African focussed gold developer, Azumah Resources, has completed a scoping study for its Bepkong “underground” resource in north-western Ghana, saying the operation could spit out 154,000 ounces of gold, producing a post-royalty, pre-tax cash flow of USD$32m over 4.5 years.

This is on top of the proposed open-pit mining operation at the Wa gold project, which has a pre-tax net present value of USD$177m and an internal rate of return of 35%, with a payback of the USD$117m establishment capital costs expected in 1.6 years.

Underground development of the Bepkong deposit could commence towards the end of development at that deposit’s open cut, which is scheduled during Year 2 of the initial 11-year mine life for the broader Wa gold project open-pit mining operations.

Beyond that, there is an estimated USD$78m for mining costs and USD$29m of processing costs associated with the treatment of the underground ores.

However, given the accelerated payback period under two years for the open-pit mining scenario outlined for the Wa project, Azumah might be able to self-fund some of those initial underground mining capital costs itself.

From this, Azumah has carved out 1.03 million ounces in open ore reserves, which will mainly be sourced from the Kunche, Julie and Bepkong deposits.

In addition, the Bepkong underground gold mineralisation is not included in the company’s feasibility study for the Wa project, which is due for completion by the end of 2019.

This study is being managed by JV partner Ibaera Capital.

Managing Director Stephen Stone said: “Fast on the back of the recently reported Bepkong ‘underground’ mineral resource of 279,700oz grading 3.59g/t Au, a scoping study has indicated that an underground mining operation could provide a material boost to the already financially robust Wa gold project with an estimated production target of approximately an additional 154,000oz and pre-tax, post-royalty revenue of approximately USD$32 million.”

“This is a tremendous development for the current 1Moz ore reserve, open-pit based project as the Bepkong underground mineralisation is a recent discovery and is not included in the project feasibility study, due for completion by year-end.”