Blackstone Minerals has hit a new massive sulphide zone at the Ban Chang West prospect at its Ta Khoa nickel-copper-PGM project in Vietnam with its maiden diamond drilling returning 5m intersection grading 0.66% nickel from 58m down hole. The zone includes just over one metre going an impressive 2.98% nickel, 1.22% copper, 0.18% cobalt and 3.43g/t PGM. 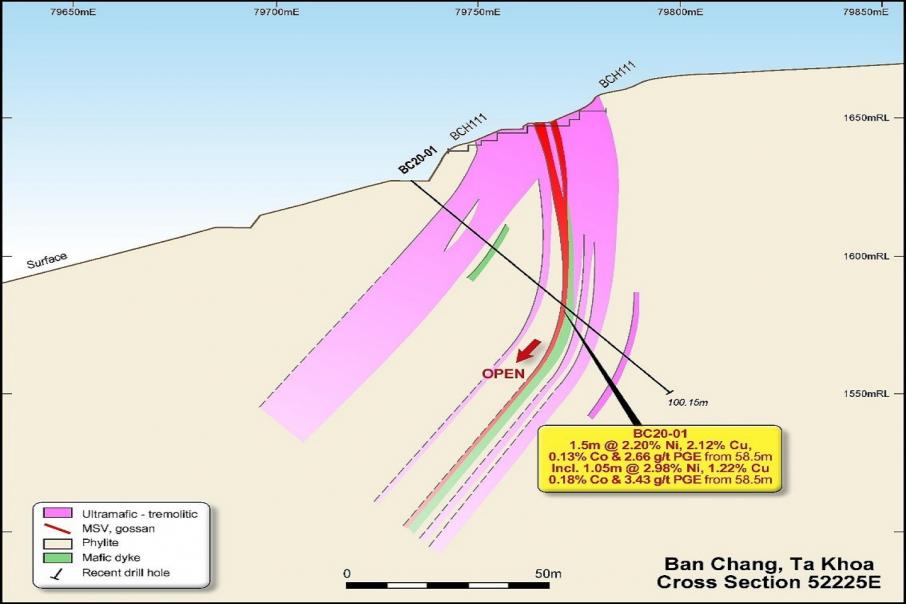 Blackstone Minerals has hit a new massive sulphide zone at the Ban Chang West prospect at its Ta Khoa nickel-copper-PGM project in Vietnam with its maiden diamond drilling program returning a 5 metre zone grading 0.66 per cent nickel from 58m down hole. The 5m zone includes just over one metre going 2.98 per cent nickel, 1.22 per cent copper, 0.18 per cent cobalt and 3.43 grams per tonne platinum, palladium plus gold, or “PGM”.

The Perth based company has drilled three maiden holes over 1km apart into Ban Chang and it still has the rods turning on site in order to get a handle on the magnitude of the discovery.

Management said the drill rig also intersected a 1.2m wide massive sulphide vein or “MSV” in one hole and a 9.15m zone of sulphide mineralisation in another hole. Assays for these holes are outstanding.

Ban Chang is just one of Blackstone’s grab bag of 25 high priority MSV prospects that were generated recently from a comprehensive electromagnetic targeting exercise.

The mineralised system at Ban Chang looks to be up to 1.2km long and has been divided into the “West” and “Central” zones.

With the gossan representing the surface expression of the multi-metal mineralisation, Blackstone is potentially looking at a fast tracked route to cash flow by digging out ore directly from surface.

Blackstone Minerals’ Managing Director, Scott Williamson said: “Our first assays from Ban Chang confirm a high-grade magmatic nickel sulphide vein with significant by-products including copper, cobalt, platinum and palladium. When the by-products are included, the overall grades of the massive sulphides from Ban Chang are substantially higher than those successfully mined from the Ban Phuc massive sulphide mine during lower nickel prices.”

“Ban Chang is one of the key prospects we are testing and it has potential to add high grade feed to a bulk open pit mining scenario at Ban Phuc. We look forward to further results from Ban Chang as we continue to drill test the 1.2km-long massive sulphide EM targets over the coming weeks.”

Vietnamese Geologists mapped the Ban Chang in the early 1960s and excavated 19 trenches in order to take samples.

The prospect is hosted in ultramafic dykes, which the company said it has currently identified over a 900m length and the dykes vary in width between 5m and 60m.

Recently, the company headlined some of its widest mineralised intervals to date at the King Cobra deposit, with nearly 265m grading 0.33 per cent nickel and 83.2m going half a per cent nickel.

Blackstone has also just polished off a resource drilling program at Ban Phuc and the company said it is now well on track to deliver a maiden resource and scoping study at the Ta Khoa project.

The Ban Phuc MSV was mined between 2013 and 2016 and produced 20.7Kt of nickel, 10.1Kt copper and 0.67Kt cobalt at the mothballed Ban Phuc processing facility. The MSV averaged 1.3m in width and featured average high grades of 2.4 per cent nickel and 1 per cent copper.

In April, Blackstone raised a serious  $6.8m by placing 40m shares to South Korean battery materials manufacturer, EcoPro, who would seem to be looking to get a piece of Blackstone’s proposed downstream processing action.

EcoPro paid 17c a share to Blackstone, representing a whopping 62% premium to the last traded share price at the time, giving it a 17 per cent stake in the ASX listed company.

EcoPro owns the world’s 2nd largest nickel-rich battery cathode manufacturer and the largest operation of its kind in Korea.