3 ounces to the tonne for Calidus at WA gold project

Calidus Resources has intersected high-grade gold with a bonanza hit of 1m @ 107.2g/t gold from 36m down-hole in a broader intersection of 13m @ 11.1g/t gold from 30m, during infill drilling at the Klondyke-St George shear-hosted deposits within its Warrawoona project, near Marble Bar, WA. The drilling campaign is aimed at upgrading mineral resources and proving up additional ore reserves to support the company’s BFS. 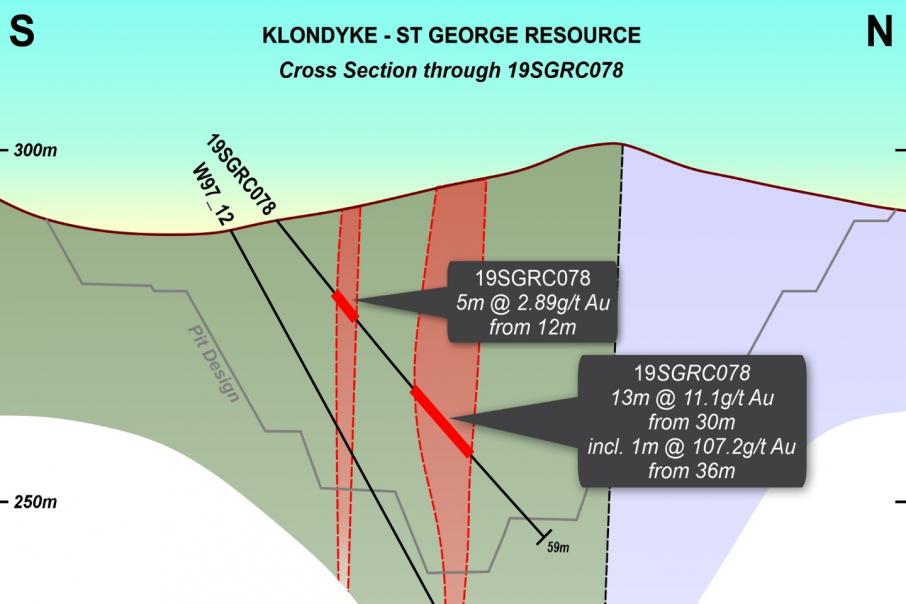 The recent work turned up a cracking intercept of 13 metres grading 11.1 grams per tonne gold from 30m down-hole, including a bonanza metre section going nearly 3.5 ounces to the tonne from 36m.

The drilling program is being undertaken within and adjacent to existing optimised open pit shells that were recently delineated by Calidus during its pre-feasibility study for the Warrawoona gold project.

The company aims to upgrade the classification of the Klondyke-St George mineral resource estimates and by extension, prove up additional ore reserves to underpin the proposed open pit and potential underground mining operation.

Calidus has a 12,000m drilling program underway at Warrawoona and a second drilling rig is being mobilised to site to ensure the campaign is completed during 2019.

Regional drilling programs are also being undertaken at several exploratory prospects across the project area.

On completion of the work, the company will refine its 3D ore models for Warrawoona and re-estimate the global mineral resources, which are expected during the first quarter of 2020.

Calidus has also recently completed a geological structural review of high-grade gold ore-shoot controls of the Klondyke deposit, with a final consultant’s report pending for this study.

Managing Director Dave Reeves said: “With the completed PFS showing a robust six-year initial mine life, we are now focussing growing the mine life and continuing to de-risk this quality WA gold development story.”

“This drilling was planned to build confidence in the resource categories and potentially add further open pit reserves by increasing pit depth in areas of low drill density.”

“The high-grade tenor of the results confirms that areas of the pit will contain bonanza grades. With one rig on-site and a second rig to be mobilised for the remainder of this calendar year, there will be strong news flow as we continue to add mine life and increase confidence in the resource and reserves at Klondyke.”

Earlier this month, the company revealed that the Warrawoona gold project would churn out an average of $61m per annum in free, pre-tax cashflow over an initial mine life of six years.

Estimated pre-tax net present value of the project was $151m at an internal rate of return of 40%, based on the pre-feasibility study outcomes using a forecast gold price of AUD$1,800 per ounce.

The numbers grow to a pre-tax net present value of $234m and an internal rate of return of 56%, using an AUD$2,000 per ounce gold price, which amply demonstrates the significant upside of the project.

Payback is expected to take two years at an all-in sustaining cost of production estimated to be AUD$1,159 per ounce for the initial life of mine.

Total capital costs were projected to be $95m, which includes a contingency of $7m.

The study assumed a throughout of 2 million tonnes per annum via a conventional crushing and leach circuit, which will generate just under 100,000 ounces of gold per annum for Calidus.

The company said it had adopted a conservative approach to evaluating the economics of mine production at Warrawoona, including the estimation of resources and ore reserves and stated that the current ongoing infill drilling program would de-risk the project further, as it moves towards the bankable feasibility stage.